Becoming Dr. Ruth is a cute little show about a cute little lady. A one-woman show about Ruth Westheimer, the world’s most famous “German-French-Israeli-American” TV sex therapist, Becoming Dr. Ruth isn’t dramatically rich, even though it recounts the often frightening events of Dr. Ruth’s early life. But thanks in part to Jane Ridley’s charming performance, it’s a nice way to spend 90 minutes, and it lets the audience know that there’s a lot more to Dr. Ruth than just a funny accent and a sly sense of humor.

Mark St. Germain’s play is set in Dr. Ruth’s Manhattan apartment – the inviting set is by Andrew Thompson – on a day that she’s packing to move for the first time in three decades. Seeing the audience surrounding her – “I am so glad you are here!” she tells them, nicely breaking the fourth wall – she regales them with the story of her life. And while she eventually gets around to her improbable rise to fame as a radio and TV host in the 1980s (and even lets her dispense a little sex advice), that’s not the focus of Becoming Dr. Ruth. Instead she focuses on her early years: born in Frankfurt in 1928, she barely escaped the Holocaust (though her parents were not so lucky). After the war she emigrated to Israel, she taught kindergarten while moonlighting as an assassin in the War of Independence. By age 28 she made her way to New York, where she learned English reading True Confessions” magazine and eventually earned a doctorate. After observing widespread ignorance about sexual diseases and behavior, she became a sex therapist in order to educate and help others.

Becoming Dr. Ruth is episodic in its structure; her stories about surviving World War II are interspersed with cute anecdotes – about meeting Bill Clinton, or about her childhood obsession with Shirley Temple. The choppiness dilutes the stories’ impact, but it makes even the most harrowing stories go down rather easily. There’s also little sense of conflict or dramatic progression; a scene where she has an argument on the phone with her daughter doesn’t seem remotely convincing. But Dr. Ruth does come across as a genuine and complex person, and it’s easy to sympathize with everything she goes through.

The wraparound seating used at the Independence Studio fosters a sense of intimacy, and Jere Lee Hodgin’s direction accentuates that sense by having her move into the audience at one point.

In the title role, Jane Ridley is sparkling as she captures different aspects of Dr. Ruth’s personality: she’s scatterbrained one moment, then quoting Hannah Arendt the next. And on the night I attended, Ridley showed just how tough she was, without stepping out of character, when a cell phone in the audience went off during the play’s most sensitive moment – the moment when she discusses the death of Fred Westheimer, Dr. Ruth’s husband of 36 years. Looking shocked and hurt, Ridley simply paused, stared down the offender and said, “I’ll tell you about Fred after you turn it off.”

There were no more interruptions. The audience learned its lesson: You don’t mess with Dr. Ruth. 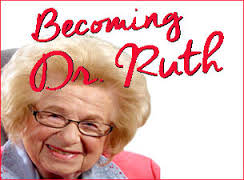