Spotlighters Theatre has gone south for the winter, spending the holidays in Texas with their production of A Tuna Christmas. Written by Jaston Williams, Joe Sears, and Ed Howard, and directed by Fuzz Roark, A Tuna Christmas is set in the town of Tuna, Texas, the third smallest town in the state, on a particularly chaotic Christmas Eve.

In a series of vignettes, we’re introduced to the townsfolk and their troubles. The annual Christmas Yard Display Contest and the hijinks of the mysterious Christmas Phantom unites the vignettes, but a series of subplots also weave in and out of scenes, drawing in ever more characters and upping the ante for everyone involved.

The twenty-two characters in A Tuna Christmas are played by a cast of only four actors. Adam Abruzzo, Glen Charlow, Jim Hart, and Matt Wetzel. All four men give great performances, making each of their many, many roles unique and identifiable. They’re also skilled at improvising when needed, as was the case when a prop or two chose to misbehave Saturday night.

Everyone was having a lot of fun, a feeling that transmitted well from the stage, though their seemed to be particular enthusiasm for the roles that required them to dress in drag. Adam Abruzzo as gun nut Didi Snavely was a vision in camouflage and anger issues. Matt Wetzel does despicable well as Queen Bee Vera Carp. And their scenes together as waitresses and best friends, Inita Goodwin and Helen Bedd respectively, were something out of a sitcom. Jim Hart was sweet as pie as Bertha Bumiller, with her Christmas blouse and well-shellacked bouffant. And his Aunt Pearl and Glen Charlow’s Dixie DeBerry were adorable as scheming old ladies.

The cast was still finding their feet in the first act, but by the second act, everyone had begun to pick up the pace, achieving the snappy repartee this play needs to make the jokes hit, and they had a devilishly funny show on their hands.

In addition to directing, Fuzz Roark also did the costuming and sound design. I adored Didi’s camo outfit and Vera’s vintage dressing gown and turban combo. The sheer number of outfits and the quick changes required are astonishing. For the sound design, A Tuna Christmas has its own specially crafted soundtrack of Christmas carols, radio voice overs, screeching tires, and nature recordings.

Ben Kinder stage-managed and was assisted by Becky Miller, who also operated the booth. Sherrione Brown was the accent and dialect coach, and she did a wonderful job; everyone sounded like a redneck, as advertised

Al Ramer’s lighting design is straightforward, but with some fun moments thrown in. There’s a scene in the second act that I imagine must’ve been fun to design, as it was certainly fun to watch.

As building sets to fit each scene change would’ve taxed the capabilities of even the most well endowed theater, this production has made the sane choice of leaving the main stage relatively bare – and thus open to our imaginations – and letting the characters mime many actions instead. With this in mind, Alan Zemla designed a set that’s open but full of tributes and visual nods to Texas. A wall painted like cow hide. Pillars painted with the Lone Star. And even a sign with Tuna Texas’ official population against one wall.

A Tuna Christmas is a cute, entertaining show that manages to simultaneously be an affectionate homage to small-town people and neighborhood politics and a scathing satire of both. As the holidays approach, I encourage anyone looking for a lot of laughs to go see chaos and Christmas cheer abound at Spotlighters Theatre’s entertaining A Tuna Christmas.

Running Time: Approximately 2 hours and 20 minutes, with one 15 minute intermission. 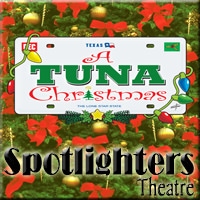 A Tuna Christmas plays through December 20, 2015, at the Audrey Herman Spotlighters Theatre – 817 Saint Paul Street, in Baltimore, MD. Tickets can be purchased online.