In Opera Lafayette‘s Catone in Utica, which opened last night at The Kennedy Center’s Terrace Theater, the greats have come out to sing.

And Antonin Vivaldi’s opera bursts with beauty and excitement. 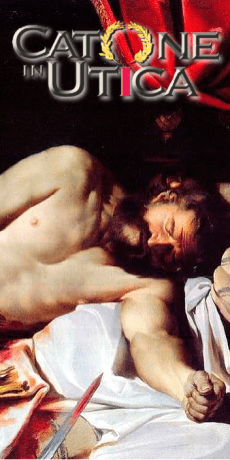 There is the Roman Senator, Catone (Cato), given dignity by the elegance and strength of Thomas Michael Allen. Statuesque in appearance, his vocal style is no less striking. His ferocity quakes beneath his chiseled features.

As Cato holds out against Caesar’s military advances in Utica (in contemporary Tunisia), he demands liberty over might, and honor over treachery.

His opponent Caesar is played by countertenor John Holiday. His vocal coloraturas are as magnificent as the ornamentations that accompany them, as he rages in highly articulate phrases and bold gestures. Some of his choreographed vocal asides to the audience were hilarious.

Caesar desperately tries to persuade Cato to agree to peace, but Cato will have none of it. Caesar’s warmongering dishonors Rome and all it stands for. Holiday captures Caesar’s rage with furious vocal flurries, and we are the delighted recipients.

Caesar pursues peace despite Cato’s obstinacy because of his deep love for Cato’s daughter Marzia.

Played by the soulful Anna Reinhold, Marzia begs her father to accept peace, and her grief holds the stage until Cato discovers her betrayal. Her love for her father’s enemy Caesar turns her sorrow into frantic pleads for mercy as Cato becomes violent and disowning.

Reinhold’s solos are more muted than Casesar’s, but she gives them a sustained sense of sorrow that highlights their strength.

Meanwhile, Emilia, the widow of Pompey, the Roman general slain by Caesar, has abandoned sorrow for revenge.

Julia Dawson embodies this treacherous woman with exuberance. Her aria at the end of the first act enthralls the audience, not only with her excellent vocal flourishes, but also with the character’s sheer glee at the thought of vengeance. Her dynamic physique, gestures, and vocal expressions keep the audience in rapt attention.

Eric Jurenas and Marguerite Krull round out this wonderful ensemble of six. As Fluvio, Jurenas captures the character’s somewhat ambiguous loyalty to Caesar, while Krull gives Arbace and his relentless pursuit of Marzia’s hand in marriage a vivid, light-hearted touch.

Tazewell Thompson directs Cantone in Utica. His direction of this small cast opera lies in direct contrast to his recent work in Appomattox, which just closed at the Kennedy Center last week. Here, with Catone’s high, tragic emotions, singers move in powerful lines across the stage, while adding dramatic shifts in attitude.

As Lafayette’s Artistic Director, Brown also chose to perform Vivaldi’s opera without the aid of a re-constructed Act 1.

Metastasio wrote the original libretto for Catone in Utica in 1728, with composer Leonardo Vinci. He then rewrote the opera’s ending after its more tragic ending was criticized.

Vivaldi’s version, which premiered in 1737, uses Metastasio’s libretto and its more moderate ending. Unfortunately, Vivaldi’s music for Act 1 of the opera has been lost to history.

Brown’s choice to exclude a reconstructed Act 1 works wonders, as Acts 2 and 3 offer the full story with dynamism and verve from start to finish.

Although Catone in Utica might end on a less than inspired final chorus, which only proves that popular desire for happy endings does not serve the arts well, the overall excellence of this production demands a hearing and receives a standing ovation.

And the verdict is: Catone in Utica is a must-see.

Running Time: 2 hours, with an intermission.