One of the most popular heartwarming family musicals, which is chock-full of youthful energy, charming songs and wise life-lessons, is coming to the Dulles Corridor. It is Next Stop Theatre’s affordable production of Seussical TYA (Theater for Young Audiences). Seussical is a based upon works by that all-time favorite author Dr. Seuss. Many a Baby Boomer may know Dr. Seuss by his name Theodor Geisel. 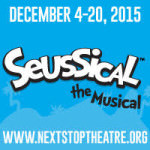 Many a favorite Dr. Seuss character, in all their flamboyant vibrancy, will be live before the audience including Horton the Elephant, The Cat in the Hat, Gertrude McFuzz, lazy Mayzie, and Jojo, a little boy with a huge imagination. They will inhabit worlds that extend from the Jungle of Nool to the Circus McGurkus to the invisible world of the Whos. And it all begins with Horton finding a speck of dust containing Whos and the challenges of protecting an abandoned egg through dangers.

Seussical was developed by the Tony Award and Grammy Award-winning duo of Stephen Flaherty and Lynn Ahrens. The two have worked together for three decades producing theatrical musicals such as Ragtime, Rocky, Once on This Island, and Little Dancer to name just a few. For the movies they created the score for the animated feature film Anastasia.

The NextStop production of Seussical includes a talented cast of nearly 30 local, young actors in 3rd through 11th grade, seamlessly linked with professional actors and NextStop veterans Katie McManus as the Sour Kangaroo, Matthew Thompson as Horton the Elephant, and Jaclyn Young as Gertrude McFuzz. The family holiday production is the largest education program at NextStop Theatre. It provides experience for participants in putting on a full length production with professional actors, directors, designers, and staff.

In developing this column I learned that there are several family connections in this Seussical production. The connections including parents, children, and even grandchildren all involved in bringing the NextStop Seussical to audiences. This column is based upon some recent interviews with the folks at NextStop who all agree that “You are never too old or too young to enjoy this show.”

As area theater veteran Gloria Dugan, who has had a long association with NextStop (and its community-based predecessor the Elden Street Players), indicated that Seussical is not a children’s show. “It is a show for adults which happens to include children in the cast. The cast is top-notch and that the audience will thoroughly enjoy the performance.”

Young performers and sisters, Abbey and Emily Whitestone, added that the show is also not just for people who know a performer in the production. Emily invited audiences with this, “Sit back, open your mind and imagine,” while Abbey added that everyone, “will be in for a colorful ride!”

I asked Artistic Director Evan Hoffmann about the show:

David: Why did Next Stop decide to perform Seussical?

Evan: When we decided to produce A Charlie Brown Christmas last year, we had no idea that it would be such a huge hit or how incredibly fulfilling it would be for us! It was became this magical event that brought our entire community together. We just knew that we had inadvertently created a new tradition. “Seussical” seemed like a perfect follow up. While it isn’t a show about a specific holiday, the message of friendship, family, and taking care of those who need us the most seemed perfect for this time of year, no matter what you celebrate.

You describe Seussical as family friendly. Why do you say that?

Seussical has a wonderful, positive message. But more than that, it is a show that is chock full of characters that hold a special place in the hearts of generations of theatergoers. The stories of Dr. Seuss are as loved by parents and grandparents as they are by the kids!

Why did you introduce your children to live theater?

Ha! I suppose they never really had a choice. With both parents in theatre, it was inevitable. I did shows while pregnant with both boys. Miles was at his first strike at 10 days old, his first sitzprobe [first rehearsal with an orchestra] at 6 weeks, and at just 2.5 he has probably attended more shows than most adults. Felix attended his first full-length play at 4 weeks, and even slept through the sounds of exploding cannons. One of Miles’ first words was “Places.”

I have had many parents tell me that my children are unique and that there is no way their child would sit through a live performance. While I will take the compliment, I always tell them that kids deserve a little more credit than they get. The power of imagination is so strong in little kids, and there is no better place to exercise that muscle than at the theatre! There is a kind of magic in live performance that can’t be explained, and it draws kids in.

What has been the biggest challenge in working with your children?

Easily, the hardest part of this is trying not to cry at the end of the play. I usually have my emotions in check onstage, but when you are holding your baby and singing about teaching him the joys in the world, it will hit you right in the feels.

Maggie Huse is 8 years old, and is the daughter and grand-daughter (of Gloria DuGan) of directors with high expectations.

What has been the biggest surprise for you in working with your daughter Maggie on Seussical?

Todd Huse: She is learning how much goes into producing a show…she is absorbing the talent around her and loving every minute.

What has been the biggest joy for you in seeing your child working on Seussical?

Like any parent, you want to see your child find and explore the talents they have. We consider ourselves very lucky. Working on a theatre production teaches so much more than just “putting on a show.” It is about listening (and singing), working as a team, technical skill-craft, project management, deadlines, time management and responsibility.

If you could invite audiences to the event, what would you say to them?

This production is unique. It is not strictly a “performed by children show, nor is it a show that is performed for children.” This isn’t a show where only parents and grandparents will enjoy their child on stage.

Instead, NextStop is producing a full production of Seussical fit for any audience.

Note: NextStop will be collecting coats and other warm winterkid’s and adult’s size winter items throughout the run of Seussical to support families in need this holiday season. These items will be donated to Cornerstones Winter Coat Closet in Reston, VA.