The man with the famous blue raincoat who wrote many a reflective, if not prophetic song over the past decades will be arriving at the Jewish Community Center of Northern Virginia Northern Virginia.

OK, not “the” Leonard Cohen himself in person, but an arts event with a presentation by author Liel Leibovitz about his recent biography of Leonard Cohen, A Broken Hallelujah: Rock and Roll, Redemption and the Life of Leonard Cohen. Having read Leibovitz’s bio, I can attest that it brings intimacy to the life of that passionate poet-turned-musician Leonard Cohen. In developing his book Leibovitz was provided access to Cohen’s personal papers.

The JCCNV event will include not only an interactive question-and-answer period with author Leibovitz, but will be complemented by a wide-range of Cohen’s songs performed by local performing artists Bayla Whitten, Mat Tonti, and Eliza Jane Berkon with piano accompanist Neil Epstein. The talk and mini-concert take place on Saturday, December 5th at 8pm.

In a recent interview Dan Kirsch, the JCCNV’s cultural arts director described Leibovitz as, “a powerhouse of a speaker passionate about Leonard Cohen, intense about what he had learned from writing the book.”  Kirsch fully expects that the audience at the “J” will be held in “rapt” attention during the evening.

The musical mini-concert will be “playing and paying tribute to Leonard Cohen to capture the essence of Cohen over the years,” said Tonti. The music and singing is meant “to bring the audience together.” 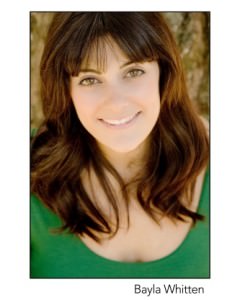 Bayla Whitten, from Northern Virginia, released her first album Something Wonderful, the music of Carole King, which she recorded live in concert at the JCCNV last year. She has appeared in a number of Signature Theatre productions such as Girlstar, Les Miserables, Elmer Gantry, Beaches, and Chess to name a few.

Whitten received a Helen Hayes Award nomination for her work with MetroStage for Outstanding Ensemble for Jacques Brel is Alive and Well and Living in Paris. Whitten can also be seen around town singing with the band Bittersweet.

David: What drew you to Leonard Cohen’s songs and music?

Bayla Whitten: The fact that so many people have covered his music. I did not know before preparing for this cabaret that some of these songs were originally written and sung by Leonard Cohen.

How would you describe a Leonard Cohen song?

It is a story told in the form of a poem.

What do you hope Leonard Cohen’s legacy will be?

That more and more people continue to discover and learn about his contribution to music.

What has been the biggest surprise for you as you have put-together the musical portions of the evening “with” Leonard Cohen?

How his songs can be interpreted in so many different ways each time you hear them.

Eliza Jane Berkon is an alternative artist, jazz vocalist and songwriter from Alexandria, Virginia. At Howard University, Eliza studied jazz and went on to compete on NBC’s The Sing-Off with a group of Howard alums in 2011. Berkon has performed at The Kennedy Center, Strathmore, Blues Alley, and the Vice President’s residence. She has been seen in concert with Smokey Robinson, Lalah Hathaway, and the late Marvin Hamlisch.

Mat Toni by day is Rabbi Matisyahu Tonti.  He can be found teaching young musicians and Torah scholars at Gesher Jewish Day School.

David: Why did the JCCNV decide to schedule this special Leonard Cohen event?

Jeff Dannick:  Leonard Cohen is an extraordinary poet and songwriter, and his music is moving and inspirational. I couldn’t imagine a program about Leonard Cohen without giving the community an opportunity to hear his music. It amazes me how many people don’t know of his work (although many know his songs and just don’t know about him).

What can audiences expect?

Audiences should expect to learn about this extraordinary man, his musical and spiritual life journey, and how his ideas can inform all of our lives.  They should also expect to be well entertained, and inspired to learn more about the man and his music.

Why should Baby Boomers, who might know Leonard Cohen’s music, attend the performance?

I am a Baby Boomer, and I find it fascinating to study Leonard Cohen’s body of work which spans my entire lifetime. Many of his songs will be familiar to people from my generation, but his impact crosses every generation since the Boomers.

Why would audiences who may know little of Leonard Cohen find the evening of interest?

The evening will illuminate the biography of a great artist, philosopher and human being. His insights are as relevant, if not more so, than they have ever been. His music is inspiring and evocative. His journey spans virtually all religions and belief systems. We have assembled an extraordinary trio of artists to bring his music to life. Who wouldn’t find this evening to be of interest?

What has been the biggest surprise in developing the evening about Leonard Cohen?

I have been surprised by the number of people who say they have never heard of Leonard Cohen. Then, when pressed, and prompted with some of his more iconic songs (i.e. “Hallelujah”), everyone knows him. For many, he has been invisible to them, but he has made an impact in their lives.

My synagogue (Beth El Hebrew Congregation) recently transitioned to a wonderful new prayer book for the High Holidays. Included in the writings were several quotes from Leonard Cohen. Last week, when I called a dear friend in Israel to offer condolences on the passing of his mother, he shared the following quote: “There is a crack in everything, that’s how the light gets in.” Leonard Cohen is everywhere.