On my explorations into the local universe of  university theater, I’ve sighted some terrific stuff. Most of it  I’ve written about for DCMetroTheaterArts (see links to my recent faves below). But if I hadn’t got a heads-up about these shows as a contributor here, there’s no way I would have learned about any of it. Campus-based productions—which  have very short runs, often just a weekend—are almost never on the radar of theatergoers outside academe. Which is a great pity. And I don’t mean the sort of pity that Greek tragedians paired with fear. I mean the doggone damn-shame kind. 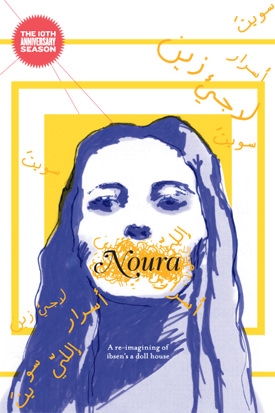 A hugely important case in point is a project that has been going on for the last two years at Georgetown University called Myriad Voices: A Cross-Cultural Performance Festival. It launched with a splash in 2014 when it Skyped in Syrian refugees in Amman who were slated to come to Georgetown (to perform their trenchantly relevant reinterpretation of Euripedes’ Trojan Women) but were denied visas. The US Bureau of Consular Affairs in Amman in its wisdom ruled that the cast members, all women, had not demonstrated “non-immigrant intent”—despite the fact they were leaving their children and young families at home.

There has to be some supreme irony in the fact that Noura, the latest offering in Georgetown’s Myriad Voices festival, is billed as “a re-imagining of Ibsen’s A Doll’s House,” the play that ends with Nora walking out on her husband and three young children and slamming the door.

The script of Noura is by Heather Raffo, an award-winning Iraqi-American playwright and performer whose work focuses on bridge-building between her Eastern and Western cultures. Inspired by stories she heard from Arab American women, Raffo set out to recast Nora in the contemporary context of a family of Iraqi immigrants. Last night I attended an engrossing reading of the play, directed by Derek Goldman and featuring Raffo herself in title role. With resources afforded by a major theater performance program, this was more than a typical staged reading. In addition to chairs and music stands, there was a lighting design, costumes, set pieces, props, a sound design. The cast of five, working with scripts in hand, had been blocked to give a sense of the play on its feet.

The character of Noura is a thoroughly modern woman—a loving and beloved wife, a devoted mother, and  an accomplished architect by profession. For the last eight years she and her husband, Tariq, a surgeon (Dariush Kashani), have made their home in America and have recently become U.S. citizens. They struggled at first, he worked for a while at a Subway, but they are relatively comfortable now.

“I need to be a woman who does something,” says Noura, wishing aloud she had been able to help rebuild her home country. But that is not to be. She is from Mosul, a place that ISIS has laid waste to (“There is a genocide in my hometown,” she says). She is also acutely aware that she now lives in a country where as an Iraqi she is suspect (“You can’t compare these psychopaths to the rest of us!”).

With a nod to Ibsen, Noura and Tariq, both Christian, are preparing for Christmas. They debate whether to give their  American-grown boy, Yazen (11-year-old Gabriel Brumberg), the violent video game he wants.

As Noura takes cigarette breaks outside in the wintry snow, we hear her troubled inner voices, whispered in Arabic, an unspeakable discontent that not only has no name but may even be unthinkable.

Two visitors arrive. One is a friend of the family named Rashid (James Whalen), who is Muslim and who like Tariq is a doctor. With another nod to Ibsen, Rashid is attracted to Noura.

The other visitor is Maryam (Madeleine Kelley), a wholly original character (and the one I found the most fascinating out of a very intriguing bunch). She is twentysomething, an orphan, and was raised in Iraq in a convent. Noura has been in touch with Maryam on Facebook and—unbeknowst to Tariq—has been sending her money. Maryann arrives in America financially independent; she holds a degree in engineering that will ensure her employability. She is also single by choice and six months pregnant. Noura is overjoyed when she first meets Maryam. Then Maryam takes off her coat and Noura sees the baby bump—and Noura has a cow.

Suddenly, shockingly, the word “slut” slips into the script, and Tariq outdoes Noura in slinging the slur at Maryam. (“She’s got slut written all over her!” he says). For her part Maryam is unfazed, completely centered in her choices, and fiercely self-possessed. She explains that having no family whatsoever, she decided with informed intent to have a child on her own. It took months to conceive, she says, and months to get rid of the guy. So she’s not about to take their shit.

As can be seen in the conflict that erupts over Maryam’s out-of-wedlock pregnancy, Raffo’s script layers on to this simmering family story a roiling country story—the dramatic tension between the culture they came from and the culture into which they are assimilating. The bond between Noura and Maryam is at the same time a sexual-political divide. The bond between Noura and Tariq is at the same time a sexual-political divide—as we learn when he angrily brings up an incident in Noura’s past from twenty years ago and declares her not “honorable.” They are words once spoken that cannot be unsaid.

As one might expect, Nora’s iconic exit in A Doll’s House gets its counterpart in Noura. Asked by Tariq, “What about your family?” she answers: “I cannot hold on and move on at the same time.” But the ending of Noura is by no means an open-and-shut case of identity gone missing, for there are surprising twists in the plot that I shall not disclose. The audience, clearly captivated, stayed on afterward for a lively and extensive talkback.

Remaining readings of Noura are sold out, but there is another Myriad Voices event tonight (December 4, 2015) for which tickets are still available online: Ping Chong + Company’s Beyond Sacred: Voices of Muslim Identity.

Noura will be read two more times, December 5, 2015, at 4 pm and 8 pm, at the Davis Performing Center’s Devine Studio Theatre at Georgetown University – 37th & O Streets NW, in Washington, DC. Both readings are sold out.

‘War With the Newts’ at Georgetown University

‘The Revolutionists’ at The Catholic University