Director Charlotte Northeast updates this 1950’s English comedy with modern aspects. From Donald Trump to Atari’s Pong seen in the projections, these references add humor to the already hysterical piece.

Despite Ionesco’s use of repetition, this extremely talented and hard-working ensemble of six succeeds in evoking non-stop laughter from the appreciative audience.

Rachel Gluck and CJ Keller (Mr. and Mrs. Smith) open this nonsensical with wonderful timing, hitting every button, and Maria Konstantinidis and Ken Opdenake (Mrs. and Mr. Martin) ability to repeat lines and scenes and invoke laughter is fantastic. The couples really thrive when in the scenes with all four of them, specifically a scene with nothing but gibberish alliteration. Every single word is nonsense, repeated over and over, but their delivery gives it new meaning every time.

As the Fire Captain, Brandon Pierce plays the perfect fifth wheel, wooing the women onstage as well as the audience. Aetna Gallagher plays his love interest, Mary the maid, whose charming strangeness sits perfectly within this world. The monologues by both Pierce and Gallagher are impossibly long-winded, full of constant laughter.

Gallagher also designed the costumes, which flatter the actors and suit the time period beautifully with classic suits for Mr. Smith and Mr. Martin, as well as shapely, colorful dresses on the wives.

The skewed-perspective scenic design by Curio Artistic Director Paul Kuhn gives the off-kilter show a proper home, with widespread deco furniture and a raked floor bleeding into the audience. Chris Sannino’s sound and projection designs work cohesively with Kuhn’s effective set. The picture frame projections sometimes feels awkward (Ionesco would be proud!) in this classic 1950’s world, while other times, they often help to land the jokes themselves. The forever ticking clock got a laugh every single time!

The lighting design by Steve Carpenter switches from isolating the actors in framed lighting to bright, boisterous colors within the blink of an eye.

I walked out of The Bald Soprano thinking, “I’m not quite sure what just happened, but I can’t stop laughing!”

Need some laughs and want an experience in the theater you will never forget? Rush and buy tickets to Curio’s The Bald Soprano. Then call me – we’ll talk about it! 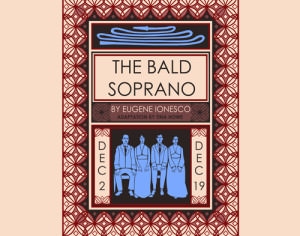