In this busy season of shopping, baking and parties, it’s nice to take some time with our families to be gently reminded of what this holiday season is about. Laurel Mill Playhouse delivers a funny and heartwarming tale that not only entertains, but reminds us of the true meaning of Christmas. The Best Christmas Pageant Ever is just right for all ages. The action moves quickly and the length of this play is perfect for even the youngest family member.

The story is about a couple who takes over the task of directing the church Christmas pageant when the original director takes ill. The struggles begin when they are forced to cast the most inventive and awful children who live in their town. Just their last name “Herdman” instills fear in every parent and child in town. The fun and hilarity begins as the show draws closer to its opening. The Best Christmas Pageant Ever is a comedy adapted from the best-selling young adult book by Barbara Robinson.

Director Rocky Nuzio creates some wonderful pictures on the stage and uses the space effectively moving his 16 actors from one tableau to the next with ease. There is one scene in particular where he has several conversations going on at once from stage right, center and left that was exceedingly well done creating the chaos and humor needed for that moment in the play. I found it to be inventive and a good use of the space.

The set design was a collaboration between Producer Maureen Rogers, Stage Manager Deborah Gur, and Director Rocky Nuzio. The design was simple, but highly effective giving the impression that the stage was a large handmade Christmas card painted with classic red and green, covered in paper snowflakes and personalized Christmas stockings for each cast member. Two platforms adorned both sides of the stage with an archway in the center which doubles as a manger for the Christmas pageant. The center backdrop of the stage is painted with the town of Bethlehem.

The set design was highlighted by Michael Hartsfield’s excellent use of light to bring out the colors of the simple, but lovely Christmas card created in the stage design.

Kudos go to Music Director William Georg for his impeccable use of the well-blended voices of the children singing along with recorded Christmas carols.  Christmas carols were used throughout the play as interludes that segue from one scene to another. Even at the end of the play within a play, there is a cast and audience sing along to “Joy to the World.”

Costume Designer Carol Mead Cartmell did a wonderful job especially with the actual Christmas pageant costumes. In particular, the angels adorned with wings and halos and the beauty and simplicity of Mary’s classic costume. Her costumes in the pageant gave the play-within-a-play its authenticity.

Two standout performances go to Carly Pometto (Gladys Herdman) and Tiana Bell (Charley Bradley) who were also the youngest members of the cast. They both gave high energy performances with amazing comic timing. Carly’s Gladys was constantly in motion flying across the stage as if she was a super hero, and Tiana’s Charley was funny with a hint of sarcasm in her line delivery. Both young ladies delivered exceedingly memorable performances.

Diana Reed (Beth Bradley) played the older sister of Charley, as well as the storyteller of the play. Diana does a lovely job breaking down the fourth wall and talking directly to the audience as she tells them the tale of the Herdman Christmas pageant.

The Best Christmas Pageant Ever is definitely an ensemble piece of theater.  Everyone in the show delivered a wonderful performance. Included in the ensemble of actors were Alexandra Fortune (Denise), Sienna Johnson (Holly), Spencer Kate (Mrs. Armstrong), Dave Martinek (Elmer), and Katelyn Shibilski (Alice Wendleken).

If you are looking for a fun evening of theater for the whole family and a dose of some good old Christmas spirit, The Best Christmas Pageant Ever at Laurel Mill Playhouse delivers it and then some. 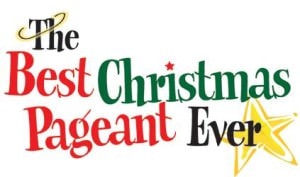