O. Henry’s short story, The Gift of the Magi, has been the stuff of Christmas memories for over a century. The Mark St. Germain and Randy Courts-penned musical version of The Gifts of the Magi, artfully staged by Maryland Ensemble Theatre, will have the same affect this holiday season.

Director Suzanne Beal understands what an audience really wants from a holiday production. Like a crackling log in a cozy fireplace, The Gifts of the Magi will warm you heart and soul on a cold winter’s night.

Daniel Valentin-Morales is Willy Porter, our newsstand proprietor, narrator and host. He skillfully knits together the details with wit and charm. His finger-snap is like Christmas magic, freezing the action as he walks through the scene. His singing voice is warm and sincere as he seamlessly transitions through the story.  The opening number “Star of the Night/Gifts of the Magi” is the perfect vehicle for Daniel’s voice.

The Dillinghams, the young couple struggling to make ends meet, are played by Eric Jones (Jim) and Shelley Hierstetter (Della). Jim and Della can barely keep food on the table as Jim struggles to find a job-any job-amidst the dearth of employment opportunities. Della anguishes over Jim’s frustration, but does everything in her power to sustain his faith in himself and in their new marriage.

Both Eric Jones and Shelley Hierstetter are wonderful performers. You feel their emotion, the conflict of the love they feel for one another clashing against the depressing lack of resources to make their first Christmas together a memorable one. They sing, dance and caress with the tenderness of young lovers, all the while fighting back tears each time a new bill comes due.

Ray Hatch plays Soapy Smith, a most gentlemanly soul who defies the stereotype of bum while at the same time reveling in it. His bed is a park bench, and his meals are those that he can enjoy without paying the bill. Somehow in spite of his condition, Soapy might just be the happiest man in New York. Ray Hatch is a gem, his soft-shoe routine during the song Bum Luck (choreographed by Julie Herber) is executed to graceful perfection.

The sights, sounds and comedic relief are provided Jeanine Evans and Laura Stark, each in the role of City, a ying/yang two-women ensemble that fill in every other character you’d expect in the Big Apple, from an Irish beat cop to an Italian chef (with moustache) to busy holiday shopkeepers. Jeanine and Laura are fun to watch, so essential to the play that I couldn’t imagine it without them. During the musical number “The Restaurant,” Stark, Evans, and Mr. Hatch sing-speak their way through a dizzying array of serving platters, dishes, and flatware. These two women epitomize a truly awesome ensemble.

You know the story, but the final poignant moments of the mother-of-pearl hair combs exchanged with the sterling silver watch fob, both gifts now unnecessary, evokes a pure and genuine wave of emotion from even the most-jaded audience. As Shelley/Della reflects on the loss of her long locks and anticipates her husband’s reaction, we feel her trepidation as she sings “The Same Girl.”

It all comes together during “Gifts of Christmas/The Gifts of the Magi” (reprise), as the cast reminds us what we really treasure cannot be procured from a shelf or a rack, it can only be found within our hearts.

Maryland Ensemble Theatre already gearing up for their annual re-telling of Dickens A Christmas Carol, is offering a less involved, but no less wonderful, Christmas love story in The Gifts of Magi. The magic in the air when the snow starts to fall might just have enough left to make your wish come true. Don’t deny yourself a thoroughly enjoyable experience this Christmas season! 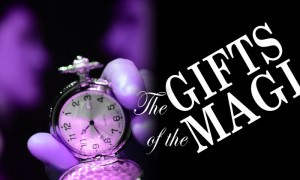