Queen of Rock Soul and American Idol winner, Fantasia brought the house down at An Elegant Evening of Giving benefit concert presented by Talking Hands Incorporated at the Music Center at Strathmore on Saturday evening, December 5, 2015. Gritty, funky, soulful and in-your-face, Fantasia Barrino is a force to be reckoned with and she whipped a blown-away crowd into a frenzy during a dazzling performance by one of the most dynamic female singers on the pop scene today. 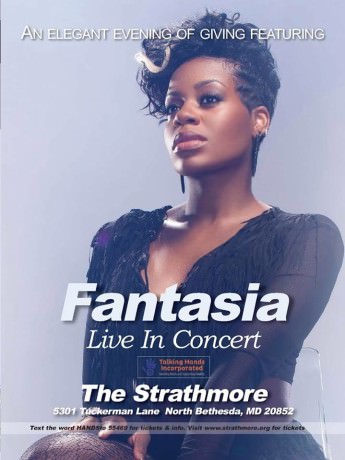 Strutting her stuff in a red lame` hot pants jumpsuit, Fantasia showed us what bootylicious really means, giving Miley a run for the money with her bump-and-grind dance moves. And that voice. Raw, raspy, visceral, sexy, and loud enough to wake the dead, Fantasia sings like shades of Otis, Sam, Billie, Ella, Mahalia, and Pattie channeling the greats from R&B, Gospel, Soul, Funk, Hip Hop and Go-Go to create a sound that is uniquely Fantasia’s. Her chops are powerful, and passionate. She seems to beg to connect soul to soul with an urgency that is not satisfied until she has almost obliterated you with the fervor she puts into every song.

An Evening of Giving was a feel-good party with a purpose helping Talking Hands Incorporated raise funds to educate and provide resources and support for families with special needs children. Emcee Tony Richards of WHUR introduced the organization’s President, Shee’ Newman, who presented community service leadership awards to Danita Brooks, Derrick Leon Davis, Cheri Dowling, Mary Ferguson and posthumously to Linda Kennedy during the first half.

Ken Ford, jazz/hip hop violinist, followed with an electrifying performance of Donny Hathaway’s “Christmas Spirit,” Mary J. Blige’s “Just Fine” and several other funk tunes warming up the crowd with shivering tremolos as he caressed his violin like a passionate lover. High energy, up tempo and with dancing feet to boot, Ken Ford is a master musician and first-rate showman with a unique kind of performance on the violin. 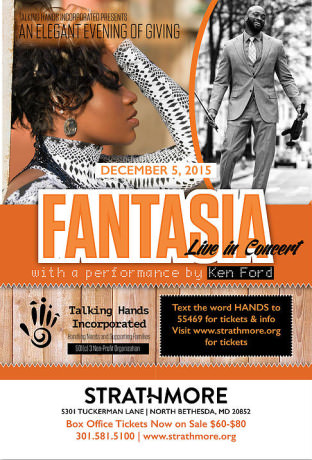 Grammy Award winner, Broadway stage star, film, and TV actress, Fantasia Barrino has risen from very humble beginnings in High Point, North Carolina to the accolades of being a recognized singer-songwriter and actress.  She even defied the odds to become a New York Times bestselling author with “Life Is Not a Fairy Tale”, her autobiography about being a semi-illiterate single mother.

Opening after the intermission with “So Much to Prove,” Fantasia had little to prove in terms of the electricity she brings to the stage. She sang her heart out in a full-out concert of older favorites from American Idol days, her first album, Broadway, Gospel, and more recent contemporary R&B.

“It’s All Good,” “Selfish,” “Man of the House,” and “Without Me” set us up for a good talking to as Fantasia laid it out about men and relationships. If the past informs the present, she lets you know that she is wiser and better and that “Free Yourself” is her mantra, as she told us, “I sing what I feel.” Fantasia lets you into her world through song and overcoming difficulty has made her who she is today. She’s been through a lot and she is not afraid to take you there. No matter the professional accolades or current life on top, Fantasia is keeping it real and her ardent, wild child authenticity is a big part of her popular appeal. The stage can’t contain Fantasia’s pent-up energy, however, and she literally flung herself off the stage at one point so she could walk through the aisles singing. The crowd went wild as she gave it her all.

True to her Gospel roots and with the full house as synchronized backup choir, Fantasia virtually turned the Strathmore into Rock Church with her spiritually moving “Trust Him/Change.” Bringing it even closer to home she belted out, “Collard Greens and Cornbread” an unlikely title for a love song about “love so good it reminds you of your Mama’s collard greens.” Her 80s medley included “Nasty Girl” by Vanity 6, “The Bird” by Morris Day, and Sheila E’s “Glam Life.”

“Lose to Win” was a great showcase for Fantasia’s splendiferous backup trio with their soulful solos of this award-winning Billboard chart topper. Fantasia closed the show with the unforgettable “Summertime” she sang as a contestant on American Idol that pushed her over the top to be 2004’s winner.

Every song was a blaring blast of high octane energy that could have blown the roof off the acoustically sound Strathmore by the soulful voice and mesmerizing presence of the fantastic Fantasia. Brassy, sassy, hot, and rambunctious, this concert was off the hook.

Fantasia: An Elegant Evening of Giving was performed on Saturday, December 5, 2015 at The Music Center at Strathmore – 5301 Tuckerman Lane, in North Bethesda, MD. For future events at Strathmore, check their calendar of events.