“We are all one. We are of the human race.” I hear and read this statement all the time, especially when we see and hear news reports of people being treated unfairly (discriminated against) or killed senselessly due not being of the norm. But how many of us who actually say “I don’t see color or gender, I see the person,” really believe and mean this?

As part of the celebration, the company performed, through stage readings, five stories. The ensemble included Monte J. Wolfe, Jared Shamberger, Josette Marina Murray, Thembi Duncan, and Kandace Foreman. The ensemble brought awareness to the countless situations and incidents that we as the “human race” face in today’s society. The stories ranged from transgendering and religion, internal conflict and relationships, to pain from losing a child to police killing. You could not sit through each of these stories and not feel the compassion, pain, and joy that each actor portrayed in their respective characters.

In “Bad Religion,” written by Stanley Z. Freeman, and directed by Monte J. Wolfe, we see a transgendered woman (Jared Shamberger), who is totally comfortable with herself when she is in an environment where she knows she will be accepted. The mere calling her a “ma’am” from others, solidifies who she really is. She encounters a bible-toting, shouting to the roof top, West Indian woman (Josette Marina Murray), and every anxiety and judgment belies her. Or so she thinks.The transgendered woman not only realizes that she too placed judgment on the religious West Indian woman, but has found an unlikely ally. Shamberger’s portrayal of the transgendered woman in “Bad Religion,” is remarkable. Marina-Murray’s delivery about love being the greatest acceptance,  is done with love and much compassion.

“Conditioned,” written by Stanley Z. Freeman, asks the question, “What are the real characteristics of a man?” Portrayed by Monte J. Wolfe, this story tells of a young man who had the personality of “effeminate,” and was teased all of his formative years. But he had the comfort and love from the women in his family, especially his beloved mother.  Fast forward to his young adult years. The teasing of his sexuality continued, but his hurt came from the people that he thought were his greatest supporters-“Black Women.”  He finally found love and happiness-with a woman. It is no doubt that Brave Soul Collective will be doing these plays again. You’ll have to catch the performance in the near future to find out about the woman  Wolfe’s delivery is full of passion and purpose. It is no doubt why he is a social advocate for change 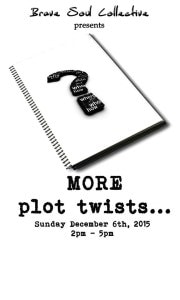 “Broken Crayons,” written and performed by Jared Shamberger, tells the story of a friend who helps another friend he has known since childhood. They use to color together. After not seeing his friend for many, many years, his friend resurfaces and needs his help. He could tell his friend was in trouble. He allows him to stay with him for a night, but they don’t have any conversation or “catching up.” When the friend leaves the next morning without saying goodbye, there is a mural drawn on the wall with crayons. The crayons were down to the “nubs.” He saw the anger, fear and passion in the mural  But what he mostly saw was, “Broken crayons still color.”

The next story, “My Sweet Black Babushka,” written by Josette Marina-Murray, and directed by Monte J. Wolfe, I admit I was very partial to.  It is the story of a black mother (Thembi Duncan) who is talking to her fourteen-year-old son about the life he had before he was killed “shot in the head and chest,” by a police officer. The village that surrounded him, to include a Russian co-worker of his mother, whom she did not like initially, but eventually became “sistah-friends.” Her Russian co-worker gave her a “Babushka doll,” when her son was born. After learning the meaning of the word and the dolls, the mother (Duncan) called her son, “My Sweet Black Babushka,” continued buying them. Duncan pulls at your heart strings of her portrayal of the grieving mother. She gives a “bone chilling” performance. I was doing my best to contain my emotions as this performance was going on. Largely due to the fact that the writer, Josette Marina-Murray, and I realize we are “kindred spirits,” as we wrote our plays regarding the senseless killings of our black men and women around the same time.

What was also amazingly captured in this performance was the emotions, and feelings of a black lesbian police officer who was at the scene during the shooting of the young teenager. She too has a teenage son. Is she allowed to grieve? Will this interfere with her job as a police officer? How can you separate your grief from your duties? Who does she go to for comfort?  Kandace Foreman who portrays the female officer, gives a performance that is too hard to describe in this article. To say that she delivered with passion is an understatement. You literally did not want to move when she was done.

Lastly, “A Matter of Fact,” written and directed by Alan Sharpe, talks about the imbalance of a relationship. One person loves, wants and desires more. The other person is not “ready for all of that,” or doesn’t have the courage to tell the other person, “I don’t want to be with you any longer,” for fear of hurting the person.

Portrayed brilliantly by Jared Shamberger and Monte J. Wolfe, it is a story that all of us in this “human race,” can attest to; gay, straight, indifferent. Then, let’s throw in having a serious and life-threatening disease such as HIV/AIDS, and surely that person will not want to be with you. But just when you think, you’re off the hook as, “A Matter of Fact,” you find out more than you want to. Then let’s complete this with drama and more drama, when all you have to do is be completely honest with each other. “A Matter of Fact,”  is funny, and Shamberger and Wolfe will keep you laughing.

Congratulations to the members of Brave Soul Collective, for your nine years of courage, educating and sharing. Cheers to you and keep “waking us up.”