As we enter, laser lights in lime green and fuchsia-purple flash across the darkened stage as yellow bubble icons float and bob in a rightward stream (lighting design: Eve Vawter), bounced against a medley of pop, soft rock, and light jazz (provided by music director Wendy Lanxner). No sooner have we settled into our seats than a variegated assembly of suit-wearing, mega-florally fedora-hatted small feminists, by costumers Wendy Eck and Dianne Dumais, improbably led by Ms. Jaques, played by Daniel West. In Shakespeare’s play (with the standard added “o”), the snooty shepherdess—a gray-haired and bespectacled Miss Jane Hathaway prototype (satisfyingly caricatured by a briskly brusque Maxine DeVeaux) offers up a breakneck patter potpourri from blank verse to U-verse.

We are, in short, not in Kansas anymore. We aren’t even in Arden. Where we are, is in a modern-day Court equivalent: a women’s competition-crazed fashion corporation whose worker bees (the youngest cast members, whose memorization and move-in-time-to-the-music skills should not go unmentioned; courtesy of choreographer Billy Griffis) become buzzless drones who, eternally (and intentionally) out of the loop, are doomed to remain there.  (They try, with a little kid’s trusting enthusiasm that’s as affecting as it is amusing, to figure out which play it is they’re supposed to be doing, illustrating their guesses with quotations as hilariously dubious as they are indubitably assured.)

We meet the characters in brief establishing scenes, expressing or suggesting sentiments that give the actors—be their colloquies and soliloquies crafted by Will, or craftily (i.e., scriptorially or directorially) willed—the chance to create personas with personhood: characters who, for all their supposed superficiality, readily, and even easily engage either our sympathy, or our enmity. (Occasionally, both.) And while it can be hard to keep them all straight without a scorecard—in addition to the swift delivery of lines both familiar and fanciful, plus era update and genre mix, there are 43 actors  playing 56 named characters—Minton (along with his seven assistant directors) has made sure that each of them knows who they are as a character, even when the character is doubtful about their own identity. And this—whether that “they” is singular or plural, the character cis, trans or binary—goes a long way toward making each one identifiable.  In both senses of the word.

As Charlene (Shakespeare’s Charles, the bone-breaking, bone-headed wrestler in the Court of Duke Frederick; here, Fredericka), Ella Savage is scathingly true to the actress’s surname—nasty, destructive, and supercilious. Making it super-delicious when the pigtailed Orlanda (Orlando) — modest, yet quietly assured, as sensitively rendered by Emily Fox; forgiving as well, despite having been greatly wronged by her elder sister, Olive (Oliver), yet capable of cutting up and flipping out hilariously — beats and bests her. As country bumpkin Audrey, wooed by the Duke’s jester Touchstone (Isabel Echavarria), Savage is Charlene’s sweetly dull-witted antithesis. (In an inspired bit, Fredericka—the masterful, and equally true to her last name, Lucy Savage—seizing the stage with a churning evil, commands her gargoyle-faced, stereophonically enhanced Wizard of Oz-voiced mirror (video and sound engineer Ron Murphy) to tell her “who’s the fairest in the land.”  Responding to her explosion of rage when he says it’s Orlanda and her demand that he say it’s anyone else, he counters, in a rubbing-salt-in-the-wound sort of way, with a demand . . . for more memory. Savage also does a boffo rendition of “Send In the Clowns,” a loud, exaggerated tremolo manifesting her seething fury—causing, with lovely incongruity, a gracefully saucy, balletically limber clown to enter and dance.)

But evidence of versatility, in a play like As You Like It, is not just limited to actors who play dual roles.There are also characters who do it as part of the plot.  And the actors who play them do not disappoint.

Rosalind (Claudia Gryder), daughter of Duchess Senior, in quasi-romantic, quasi punk-grunge mode, her red and black gingham peasant dress accessorized by a leopard-print wrap, ripped black stockings and knee-high black boots, is much like her attire. Independent-minded and creative, Rosalind will turn her unjust banishment by the evil Fredericka—who’s used her niece’s affection for the hopeful suitor Orlanda as an excuse to get rid of a reminder of the much-resented sister whose duchy she usurped—into an opportunity to creatively stitch together cast-off (and ripped-away) pieces of a life.

Disguised as the boy Ganymede, Rosalind flees to idyllic Arden, home of her banished father, with her loyal friend, Fredericka’s daughter Celia (Maya Griffith), and Touchstone. Gryder strikingly and skillfully negotiates the transformation, switching from feminine but valiant maid to boombox-toting, hip-hop blasting, exuberantly get DOWN male, while Griffith’s Celia is infused with warmth, reason, and kindness; as with Fox’s Orlanda, her decency and selflessness are almost palpable.

Echevarria’s excellent Touchstone, alternately antic, pensive, and incisive, offers a contemporary evocation—a touchstone, if you will—of the historically conflicting critical reactions to the character, his Greek chorus-like commentary coming at times like welcome pearls of wisdom, then falling at others like the self-important utterances of a fool.

But now: Ah, Arden! As darkness falls and dawn breaks, we find the sharply psychedelic hues of the opening light show replaced by soft sea shades of peacock blue and aqua, the vertical sheet of bright yellow icons by a carpet of twinking pink and yellow stars; the music, now serene, is gracefully classical.

Yet paradise, at least in its classic sense, eludes us. 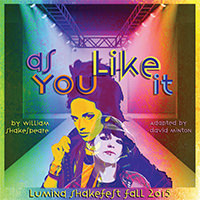 Er—Arden? ’Tis a rickety, Our Gang-style deserted theater plastered with angry and assertive signs, where a raucous feminist cohort holds sway.  MCPs: Watch your you-know-whats.  These “womyn” are gunning for equal rights for all genders, and have as little mercy for misguided females (Lena Ruther’s pale, demure Mandy, demeaned by two painted and beglittered bitches, unpins her tightly wound hair, shakes its silky blond tresses to her waist, and belts out, in almost-there, Broadway-here-I-come style, a rousing rendition of “I Am Woman!”) as they do for the unlucky men who dare to objectify them with insulting new lyrics to a Cabaret favorite.

There’s a lot of that here; and while attempts at relevance occasionally fall flat, or feel forced, most of it works—some of it surprisingly well—if one is willing to grant Lumina license to take license, not just with time and place, as estimable companies from London’s RSC to DC’s STC make a habit of, and take pride and pleasure in doing; but with verse and verbiage, sense and sentiment, sometimes in the most cherished utterances of canonical characters.

If there is one character known best from this play, even to those who do not know the play—or even his name—it is the cynical Jaques, philosopher to Duke (Duchess) Senior, whose “All the world’s a stage” may be the most popular Shake-speech outside of “To be, or not to be.” Here, Daniel West gives us a circumspect Jaques (Minton calls him a “sourpuss,” which may partially explain his dryness) whose observations are wittily supplemented or snippily undercut by pithy comments coming from a mini-chorus.

There is certainly much to relish here; so much, that you may want to see it again to catch all the things that barely caught hold in your consciousness, competing with half a dozen others bidding for your attention. It may not be classic Shakespeare; but it takes Shakespeare out of the class, and into the theater in a way that may resonate with those who never “got” him, and will decide to give him another try. In that sense as well, it can be said—to borrow a phrase—All’s well that ends well.

As You Like It ends its run this weekend at Lumina Studio Theatre performing at The Black Box Theatre – 8641 Colesville Road, in Silver Spring, MD, with performances at 2:00 pm and evenings at 7:00 pm on Saturday and Sunday, December 12 and 13, 2015. For tickets, purchase them online.