In 1955, Johnny Mercer published these opening lines to a hit song of his: “When an irresistible force such as you meets an immovable object like me,  something’s gotta give.” These words kept flashing through my mind as I watched Al Pacino plow his way through David Mamet’s play China Doll. What “had to give” was the play. What was left was a two hour virtual monologue in which Mr. Pacino’s “Mickey Ross” spent about 90 minutes on the phone talking to his attorney, his girl friend, the Governor of New York and others.

Yes, there was an assistant named Carson who shared his spacious apartment, and with whom he conversed now and then, but I submit that a ninety minute series of one-sided phone calls does not make a play. Poor Mr. Pacino had to play both parts during these phone calls; Mickey Ross as well as the other party on the phone. As we couldn’t hear them, he kindly managed to fill us in on what they were saying to him: I’m paraphrasing, but there were lots of lines like “How do I feel about that?” and “What do you mean I’m crazy?” and “Are you sure you never left the room?”.

Mind you, Mr. Mamet has supplied Mickey Ross with a goodly supply of qualities and Mr. Pacino has absorbed and inhabited them all. He has found a walk that is Mickey’s; his expensive but wrinkled navy suit is Mickey’s; his accent and voice could only belong to this self-made billionaire. His is a memorable creation with an astonishing range that roams from  bellowing highs of rage to mumbles that suggest exhaustion. He’s funny, he’s commanding, he’s lovable and frightening, often at the same time. He listens, he responds, he moves like a caged animal, sometimes enjoying himself almost as much as we do.

An actor named Christopher Denham has the hapless task of playing the assistant Carson, and he contributes enormously to the proceedings, never leaving the stage, reacting to everything his adversary does. When the two actors take their calls at evening’s end, Mr. Denham’s applause is topped only by the roar of approval that the star receives for his virtuoso performance.

When I wrote above that what had to “give” was the play, I meant only that Mr. Mamet’s work reminded me of the comment occasionally made referring to an actor: “He could be interesting if he just read the telephone book.” Because  all the supporting characters are offstage on various unseen telephones, I had the feeling that the playwright took an afternoon off one day to dash off this outline for a play in which, in a later draft,  at least three of those characters would show up and play themselves. But there was no later draft. So we were left to fill in the blanks, making what sense we could out of Mickey’s monologues and his reports on what came back into his ear phone. Very late in the evening, a plot began to form, and there were a couple of surprises one has every right to expect in a dark comedy such as this one.

Pam MacKinnon and Derek McLane as director and designer have provided the actors with a grand and glorious apartment with lots of room for Mr. Pacino to pace and sit and lie down and never once bump into the furniture. The “story” such as it is, involves Ross’ missing mistress, the impounding of his multimillion dollar plane in Toronto, and the trick is for him to find her, and to retrieve the plane without having to pay some $5,000.000 in sales taxes to the government. As it’s difficult for most of us to give much care to such a predicament, it’s not the play that holds us. It is strictly the virtuoso work of its star, with the able support of its one supporting player, that gave me a memorable evening in the theatre.

If you’re looking for star quality get thee to the Schoenfeld Theatre on Broadway for a  living shining example of it. 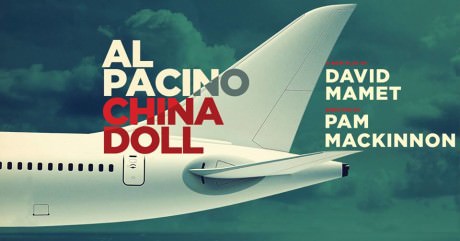