Castaways Youth Theatre presents It’s A Wonderful Life, Doug Rand’s fast-paced stage adaptation of the holiday classic. Julie Little directs a large cast of local youths in this production, and while the performances are by young actors, they are supported by a solid and promising foundation.

Technical Director and Set Designer/Builder Scott Keller uses a silhouetted outline of a small city as a backdrop, with two entrances framing the stage; one, an imposing, grand marble-columned Bank of Bedford Falls, the other, the comparably shabby storefront of Bailey Building and Loans. As this contrast is important in understanding the plot, the staging for this idea is clever and succinct. The remainder of the setting is simple– as the cast is pretty large, there must be space onstage to fit them all. To enhance individual scenes, small set pieces are brought on and offstage throughout the production, such as a fireplace and Christmas tree. Sound effects by Greg Little (whistling winds, shattering glass, and a wedding march, among others) pair nicely with musical orchestration and direction by Sharon Hale.

Joseph Limber uses nice effects with the light board, the most noticeable being a brighter atmosphere during flashbacks to help clarify the interchanging timeline. The mid-1940’s are best represented in the costumes by Jill Beare and the dated hairstyles by Missie Gautsch and Lisa McClinton.

A defeated and downtrodden George Bailey (Robert Mourad) is about to a desperate choice – that is, unless his guardian angel Clarence (Ellen Limber) is able to change his mind and his fate. Bailey’s journey is separated into two acts; the first reflecting on his life in flashbacks, and the second, observing the world around him in the scenario that he had never been born, revealing his personal impact on the lives of those around him. The two acts are connected through various moments in time. For instance, we are shown a younger George Bailey (Paul Limber) saving the life of his younger brother Harry (Logan Croker) when he fell into a frozen lake. Harry grew up to be a celebrated war hero who saved dozens of lives…until he didn’t, because without George around to save him, Harry did not live on to save several others. Young George also saves his former boss Mr. Gower (Jack Mourad) from making a dire mistake, a mistake that, gone unchecked, went on to destroy Gower’s life. As it turns out, the world is a much better place having George Bailey in it.

And then there’s Mary, George’s wife, played by Kaleigh Webb. Their romance evolves when an older George Bailey (Josh Gautsch) sets his eyes on her as a teenager. George is ambitious and eager to see the world, and is on the track to do just that– until life intervenes, and he finds himself begrudgingly taking over his late father’s building and loan business. Though his life is simpler than he wished, Mary helps him find joy in helping his community, and the two form a strong bond and make a happy family. However, powerful businessman Mr. Potter (Nathan Brown) sets his efforts on bringing down Bailey, his who has become his one main competition. Treachery, scheming, and deceit on Potter’s part lead Bailey to his desperate night on Christmas Eve, when a choice must be made.

The overall performances could be more polished, it’s true, but the evening is still an enjoyable one. I particularly enjoyed Josh Gautsch and Robert Mourad in their turns as George Bailey, matching their performances with quick dialogue and mannerisms. My favorite scene involved an upset George finally snapping in front of his family, losing his patience with his children and yelling at his daughter’s teacher on the telephone. This production is mainly dialogue-driven, so this emotional scene was a welcome one, and it was well-done. Andrew Stump got a lot of laughs from the audience as flustered, bumbling Uncle Billy, and Jack Mourad shows brewing talent as the staunch Mr. Gower. On the whole, it’s obvious that the ensemble is having  blast working together while perusing their shared passion, and that is always fun to watch.

I enjoyed Castaways Youth Theatre’s production of It’s A Wonderful Life. This classic story takes us back to a simpler time, and never fails to bring out the joy of the season. I would recommend it for a nice date night! 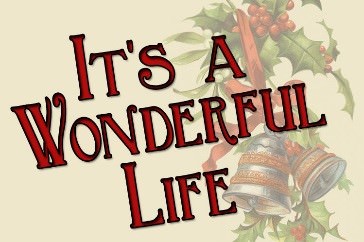 It’s A Wonderful Life plays through December 19, 2015 at the Castaways Youth Theatre performing at The Dr. A.J.Ferlazzo Building- 15941 Donald Curtis Drive, in Woodbridge, VA. For tickets, purchase them at the door (cash only), or online.