For Pig Iron Theatre Company’s 20th Anniversary, the troupe is returning to a show it first presented in 1998 and which they have gone on to perform around the world. It’s Gentlemen Volunteers, a stark, absorbing piece about four young people transformed by World War I. Using a few props and some unusual theatrical techniques, four actors make the horrors of war surprisingly vivid.

Gentlemen Volunteers follows poet Vincent (Scott Sheppard) and football star Rich (Bryant Martin), Yale students who sign up as ambulance workers – and, later, as soldiers – on the front lines in France. Their rosy conception of war as a gentleman’s adventure is quickly shattered –by the trenches, by mustard gas, by blood, by heartbreak. Also serving are two nurses: apple-cheeked Mary (Lauren Ashley Carter), an English rose who will lose her innocence in more ways than one, and Frenchwoman Francoise (Melissa Krodman), hardened by the early death of her husband.

The plot of Gentlemen Volunteers doesn’t have many surprises. We know how the war will turn out, we know how these lives will turn out, and we know how the two sets of romances (Rich/Mary, Vincent/Francoise) will turn out. What makes the story interesting is the way it’s presented. Instead of props, the actors use mime-style movements – for instance, to dramatize a strong breeze suddenly blowing in through an open window, the actors use hand gestures to simulate papers being scattered across the room, while a musician/foley artist (Michael Castillejos) riffles papers to provide the sound effects. When Rich and Vincent have to recover casualties from No Man’s Land, they drive to the battlefield then use shovels to push aside the debris and pull out bodies – but it’s all accomplished through movement. It’s stagecraft at its simplest and most elemental, and it lets the audience focus on the expressive actors and see how the war affects them.

The theater where Gentlemen Volunteers is performed is a converted gym, outfitted here with incandescent bulbs hang from the ceiling, turned on and off via pull chains, to provide the barest possible illumination. The actors move from zone to zone across the vast room, from imagined setting to imagined setting, and the audience moves with them: starting on benches in the middle of the room, the crowd is directed to walk to another section of the room, then back to the benches (now up against a wall), back to standing, then to bleachers.

There were some problems: even though the audience is restricted to a few dozen people, there were not enough seats to hold everybody, so some people were forced to stand for most of the show. At times I was more concerned with getting a better view than with whether Rich and Mary would find true love. Having to move frequently was tiresome and unnecessary. Also, due to the diminished lighting, the mime movements become harder to see the further away the actors are from the audience. And those movements are sometimes confusing: I understood that fingers moving down cheeks represent tears, but even after repeatedly watching actors trace boxes in the air around their co-stars, I couldn’t figure out what it was supposed to mean. But these occasional arty indulgences don’t get in the way of the overall effect.

Director Dan Rothenberg and his cast, working from a script by Suli Holum (developed with Pig Iron’s company of actors), turn a straightforward story into something that’s constantly surprising and emotionally resonant. Seventeen years after its premiere, and a century after the war that inspired it, Gentlemen Volunteers is, sadly, timeless. 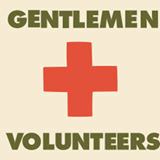