Audiences were invited to take a break from the season’s hustle-bustle, and join W.I.G. for jingly-jangly improv fun for all ages. And did they ever, resulting in a sold-out, howling-with-laughter house on the unseasonably warm December evening, celebrating all things holiday-related and seasonal.

The 2015-2016 cast features eleven actors who bring creative and distinct, character-driven talents to the fore, with well-timed, smart, finely drawn details including dance, movement, song, impressions, and pantomime. Kramer and Johnston’s line-up moved at a jolly pace and included extra opportunities for audience participation. An impromptu Holiday Newscast with actors Noah Bird and Daniel Johnston included a spot-on, too-funny impression of Gary Busey (Noah Bird) and on the field reports from Doug Goodin (Weather) within the confines of a mall on Black Friday, and Sierra Young (Sports) with a laser-focused play-by-play on the annual Reindeer Games (yes, the actors performed the competing reindeer to perfection).

Shannon Willing and Autumn Kramer started a scene with a simple activity suggested by the audience: “Choosing a Christmas Tree,” which evolved into a hilarious day-in-the-life of a husband (Shannon Willing) and wife (Autumn Kramer), their “catty” feline companion (Daniel Johnston) and their almost-too-real Christmas tree formed by Thomas Matera, Diego Esmolo, and Sierra Young. Children, such as seven-year old Isabella Horvath joined in the holiday improv fun as a special guest artists several times throughout the show; Isabella was featured in a scene with Diego Esmolo and Apryl Motley about a holiday dance contest and especially as Mrs. Claus, who had a line out the door of grown-ups with requests (and she delighted the audience by granting actor Scott Lichtor’s wish that the Ravens win “at least a couple games”!) One show-stopping highlight featured Douglas Beatty and a little boy, with Beatty as a first-day-on-the-job mall cop, receiving orders from the boy.

Grandparents were invited to the stage and more than held their own, teaching the W.I.G. cast several kinds of holiday “how-to’s,” with hilarious results.

No matter the season: The community is flocking to W.I.G., which, with its well-deserved reputation for excellence, delivers consistently engaging and original storytelling with warmth and a sense of improvised magic.

It’s a Wonderful W.I.G played for one-night-only on Friday, December 11, 2015 at Arts Collective@HCC. For future events, check their website. 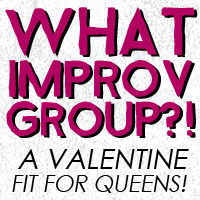 W.I.G. – A Valentine Fit for Queens 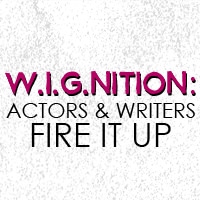 W.I.G.NITION: Actors and Writers Fire It Up