On December 18, 2015, GMU Center for the Arts hosted the Vienna Boys Choir and their concert Christmas in Vienna. Acclaimed Conductor Bomi Kim leads twenty-three young boys; all between the ages of 10 and 14 and from 30 different nations. 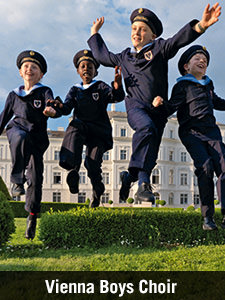 This highly-celebrated choir has been banded since the 15th century, and has worked with countless revered musicians and composers. Such was their esteem that until 1918, the choir only sang exclusively for the imperial court and private state functions. Dressed in simple sailor suits (their uniform of choice since the early 1900s), it is obvious that these young boys are a part of something majestic. The boys are regimented (and, I’ll say it– a bit intimidating) as they take the stage– they are identical down to their stoic stance, expressionless faces, and formal bows. Respect is silently demanded, and given, before their very first song.

As their song list is comprised of songs that span centuries, cultures, and countries, the program included the lyrics and background information on every number, including English translations for the German and Latin songs, which was very helpful and interesting. They began the night with “Gloria– Domine Deus– Quoniam tu solus santus” by Antonio Vivaldi. As impressive as promised, the boys’ voices are marvelous; the vocals are perfectly sculpted and honed, and together create ethereal harmonies. Different boys were highlighted throughout the show, whether given solo lines or, in some cases, entire songs or hymns to themselves, such as “He Shall Feed His Flock, ” an aria from 1741.

The first half of the concert was full of songs that were, for the most part, unfamiliar with the modern American audience. Examples of these are Franz Schubert’s Ständchen and excerpts from Henry Purcell’s Come Ye Sons of Art. While not really relatable, the songs were beautiful to listen to all the same.

A dramatic moment came when one of the choir boys apparently fainted during John Rutter’s Tomorrow Shall Be My Dancing Day. I was amazed that in the following moments the boys remained unfazed and continued singing as if nothing had happened, while the audience gasped and murmured with worry. After a few seconds, the boy still did not stir, and Kim halted the concert to attend to him and help him offstage. Moments later she came back onstage and announced that they would be starting the song from the beginning.

After intermission, Kim assured the audience that he was alright, though he remained absent for the remainder of the concert. In light of this, I am very impressed with their upmost professionalism.

Kim had a different choir boy introduce each set of songs, and in this it was nice to see them talking normally instead of singing. The austere, almost solemn presence that they exude is commendable, but it did restrict the audience from seeing the boys’ individuality. The one thing I would have loved from this show is seeing more of the boys’ personalities.

The songs became more and more recognizable as the evening wore on, and more upbeat as well. Adolphe Adam’s O Holy Night was a crowd favorite, as well Jule Styne’s Let It Snow! Songs from popular movies were sung as well, my favorite being Hugh Martin and Ralph Blane’s Have Yourself a Merry Little Christmas. The boys seemed most expressive with James Lord Pierpont’s Jingle Bells— many smiled as they sang. The choir ended by encouraging the audience to sing along with them, both in English and in German! The audience obliged, and began to clap along to the beat as well.

The Vienna Boys Choir’s Christmas in Vienna was a unique experience. These young boys are immensely talented and their voices are really something to behold. However, I did find myself wishing for a bit more Christmas spirit, though they did become more lively towards the end of the night. Overall, seeing such impressive young talent was both encouraging and awe-inspiring.

Vienna Boys Choir: Christmas in Vienna was performed on December 18, 2015 at GMU Center for the Arts – 4373 Mason Pond Drive, in Fairfax, VA. For future events, check their calendar.