Photos In The Fire/Fotos En El Fuego is the first complete one-act play the Paso Nuevo has created together, a milestone for the GALA Hispanic Theatre‘s community-based performing arts group.

By sitting down in a workshop setting, trading ideas, sharing real life experiences, integrating individual voices and working hard for several months, these kids, ages 14-19, proved something to themselves and an audience of friends and parents. They understand that by setting a goal and working together, they get results.

On Friday evening, December 18, 2015, the completed play, entitled Photos In The Fire/Fotos En El Fuego, subtitled Blood Makes You Related, was presented on the main stage of the GALA Hispanic Theatre in Tivoli Square.
Here are three of the life-changing traumas confronted, in what I saw last Friday night:

1. Two guys who were close friends in high school confront what it means to serve prison time.

2. Two close girl friends discover they are homosexual and confront their parents about it. The father tells the girls that he is going to accept them for what they are, even if one mother will not.

3. A young woman has to give up a dream to care for a baby when she had ambitions to go to college. Nothing else matters except life. A baby has to be cared for.

Actions often have unintended consequences. And actions can have life-long impact. The message is clear: Think before you act or make a decision.

What was impressive was that the Paso Nuevo participants didn’t stop there. In the final Holiday Christmas party scene, the main theme of the play is looked at head-on, without flinching. The characters in three main episodes reveal the truth about themselves in front of the party goers. The character James, for example, confesses how he took the rap for his best friend, Malcolm, and did prison time, but angrily describes the difficulties of post-prison reintegration into society. But there’s a surprise twist. While James was in prison, Malcolm, who was a law student, took care of James’ child. Then when Chela reveals that she has terminal ovarian cancer; her boyfriend sticks with her and proposes marriage anyway. How far should friendship go? What makes a true friendship last? The message seemed to be: Life above all.

Paso Nuevo Artistic Director, Alina Collins Maldonado, explains the motivation behind the project this way: “The Paso Nuevo ensemble decided to do something different this fall. Instead of individually writing separate scenes and monologues, they wanted to challenge themselves to create one play together.”

Now in its 23rd year, Paso Nuevo, the after-school theater arts program won a 2012 National Arts award After-School Program from the President’s Committee on the Arts and Humanities. At that time, the group dealt with adjustment problems that outsiders, specifically young adults from immigrant families, face when integrating into American society. Also, the conflicts between generations. Parents who still feel the language barrier and remember another way of life. In contrast, their children are assimilating in the U.S. Since then, the Paso Nuevo’s focus has shifted. The Paso Nuevo participants are Americans now, sharing everyone’s problems in growing up.

Most certainly, Photos In the Fire demonstrated that these teens and older (some are graduates who are in college now) have produced a challenging one-act play with rising suspense, a climactic scene, and falling action. The resulting play succeeded in raising important questions about making life-changing decisions.

In the post-show talk back, the kids revealed that the workshops started with individual personal experiences. But when a team got together, they discovered there were common experiences. What’s impressive is how these kids were able to combine their individual voices into characters and scenes with dialogue. Together they were able to write a mature, hard-hitting one-act. The ending may have been unresolved for some; but important questions were raised:

“Look around you. Are the people around you really your friends? Blood makes you related, but Loyalty makes you family,” one Paso Nuevo ensemble member said.

“The workshops are held throughout the year, providing a safe environment for youth to explore identity issues and cultural differences, articulate their values, increase self-esteem, and gain bilingual skills that will enhance their academic performance and future career opportunities.”

Running Time: About 90 minutes, including an introductory video made by Paso Nuevo members. 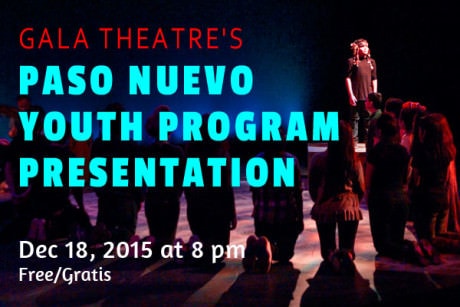