Rorschach Theatre has produced another one-night-only show in its adventurous and eclectic Klecksography series, and Saturday night I went to report on what I saw. If I had to encapsulate the evening for folks who weren’t there or who are unfamiliar with Rorschach’s esthetic, I’d have to say it was silliness noir—with an irreverent spin on Christmas cheer worthy of a slightly sinister Santa Claws. 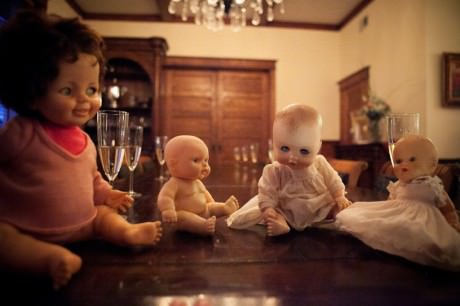 The word klecksography comes by way of the company’s namesake, Hermann Rorschach, he of ink blot test renown. Klecks is German for blot, and klecksography was the name Herr Rorschach gave a children’s game. Now it’s the name Rorschach Theatre gives its idiosyncratic theater game for  folks who’ve not outgrown childhood: First a provocative theme is picked. Next a bunch of local playwrights, directors, and actors are enlisted. (You’ve likely seen their names featured on playbills around town; this is their chance for some freewheeling playtime all their own.) Each writer is assigned a director and a cast of four or five and given 24 hours to deliver a script on the designated theme. Within a week the several playlets are rehearsed, designed, and teched, then performed on stage as an antic anthology—at which point the audience joins in the fun (as was amply evident at the show I saw).

The evening was conceived, curated, and produced by Rorschach Artistic Directors Jenny McConnell Frederick and Randy Baker. The theme they came up with promised to be not only fun and dark but personally relatable:

On an iceberg near the North Pole Charlie stands sentry over the Island of the Misfit Toys—a place where slightly flawed toys go to be forgotten. On this quiet winter night, The Abominable Snowman attacks—but before he can eat him, Charlie asks if he would rather hear a story. The snowman agrees and Charlie begins to distract him with story after story of misfit toys and their adventures. In a story that is equal parts Arabian Nights, Rankin and Bass and Goonies, KLECKSOGRAPHY: ISLAND OF THE MISFIT TOYS tells seven unexpected tales about what it means to be an outsider.

The “iceberg near the North Pole” was suggested by peaks of white bed linen suspended across the cyclorama. Benches and platforms about the stage were also covered with white sheets, which were removed when each set piece came into play.

The evening’s emcee and continuity wrangler was Charlie (James Finley), who wore a cardboard box around his waist hung from suspenders. As he was Charlie in the Box, not Jack, no one wanted to play with him, making him a misfit toy. Charlie’s nemesis was a menacing amplified voice (James Rogers III). Charlie tried to mollify the monster by telling tale after tale, each of which he introduced by opening a gift-wrapped box and pulling out a prop pertinent to the plot of each playlet.

And so the evening went. Seven playlets in all—each a little screwball, each a little pointed or poignant. There was much, much clowning. It was like watching 30 accomplished actors cut loose on stage and act out with the energy of jumpy school kids at recess. In the casts of characters created by the writers were a lot of jokey pokes at famous toys (see credits below), and the actors’ makeshift costumes and makeup were comically in keeping.

The evening ended on a musical note. The entire cast gathered on stage and led the audience in a sing-along. The lyrics (by Jack Novak), hastily distributed throughout the house, began: “Have a lonely, sad existence.” The fact that that cheeky sentiment seemed to crack everybody up captured perfectly the satyric spirit that seemed for the expanse of this ephemeral show a counter-seasonal uplift.

Klecksography: Island of the Misfit Toys played one night only December 19, 2015 at Rorschach Theatre performing on the Lang stage at Atlas Performing Arts Center – 1333 H Street NE, in Washington, D.C.