The anticipation before the start of a show is always palpable to friends, family, and performers alike. I sat in the Music Center at the Strathmore, waiting for Moscow Ballet’s Great Russian Nutcracker to begin and could feel the buzz of excitement as the audience trickled in. Watching the reflections of dancers beneath the curtain, I saw shadows of feet flitting about as they warmed up and practiced their lifts.

This time of year, The Nutcracker is a holiday tradition for many families across the globe. The Moscow Ballet’s Great Russian Nutcracker, though, takes the experience a step further by working with Host studios in tour cities to allow talented youth to join the professional company through a program called “Dance with us.” 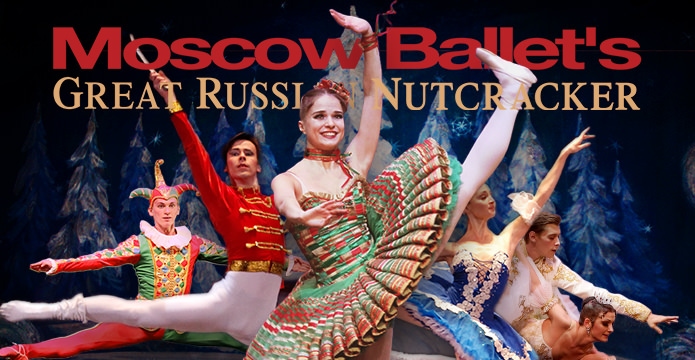 The “Dance with us” program gives young local dancers the opportunity to audition, rehearse, and perform in the touring show, alongside acclaimed dancers on a professional stage. Moscow Ballet’s site states that “50,000+ student dancers, in US and Canadian cities from coast to coast, have performed side-by-side with the Russian company of 40 in the program over the past 2 decades.”

But even before the main performance begins, the Moscow Ballet’s “Musical Wunderkind” program presents a local Symphony Orchestra Concerto Competition winner to accompany one of their principle ballerinas, Ekaterina Bortiakova, in Saint Saen’s “Dying Swan.” Bethesda’s local prodigy, who was awarded this honor Monday night, was cellist Ian Champney.  The piece was short but exquisite with the string player and ballerina duo on the apron on the stage. Champney expertly conveyed all of the complexities in the beauty of life and death that the piece illustrates, while Bortiakova danced in sync with fluid perfection to each note.

At last, though, the show begins. The local youth onstage with professional dancers, in the story of an incredible Christmas adventure, where a creative uncle gives his niece a magnificent present and a magical night that she will remember forever.

The stars of the show are Ekaterina Bortiakova, who plays Masha, known as Clara in most US versions on the story, and Akzhol Mussakhanov performs the Nutcracker Prince. Bortiakova portrays Masha with an infectious joy that immediately engaged and carried me through the performance. The skill of the two is magnificent, though it is not until towards the end of the show that you truly get to witness the extent of their talents.

Another lovable, well-known pair is Harlequinn and Kissy Doll, performed by Mykola Vorivodin and Ganna Tyutyunnik respectively. They did not disappoint as they are the first seen of the magical life-like dolls who dance for everyone’s delight.

The first thing to truly catch the eye though is the incredible set design, by Academy Award winner, Carl Sprague, with gorgeously illustrated backdrops of flowing curtains. Valentin Fedorov designs the amazing 10ft tall puppets and backdrops, while John Creech created the magical clock, with an incredible sculpted owl whose wings open up to a 5ft span when the clock strikes.

The costume design, Arthur Oliver, was also fantastic. Some of the pieces were divinely imaginative, as in the Dove of Peace, which made for a beautiful pas de duex, with Elena Petrichenko and Sergey Chumakov. Each dancer wore one of the wings of the dove on their arm so the true picture of the bird only appeared when their bodies entangled with lifts and spins to form breathtaking pictures.

The whole of the show was beautiful danced and Mary Giannone Talmi’s choreography for the children worked well to blend the local dancers in with the principles seamlessly. Credit to Lorraine Audeoud Spiegler, Elizabeth Terschurr, and Maryam Najafzada for their direction of the children and youth roles in the production.

I cannot end without mentioning the awe-inspiring performances of Elena Petrichenko and Sergey Chumakov, as the Moor Dolls and the Arabian Variation couple. It’s hard to explain the beautiful poses and fluid lifts that these two were able to make with their bodies. They were a single powerful unit at times, then at others broke away to dance with individual precision. They were stunning and controlled and seemingly perfect.

The Moscow Ballet’s Great Russian Nutcracker is a wonderful experience for anyone with a love of dance, music, or adventure. The Moscow Ballet’s mission is to “provide art enrichment for the local communities in which it performs” and they succeed in that mission. The Company does a truly amazing thing by reaching out to local studios and allowing the local talent to have a once in a life-time opportunity to perform for their families, in this international Christmas classic.

Running Time: 2 hours with one intermission.

The Moscow Ballet’s Great Russian Nutcracker plays through December 22, 2015 at The Music Center at Strathmore – 5301 Tuckerman Lane, in North Bethesda, MD. Purchase your tickets online. For more information and performances at the Strathmore, visit their website.