The Three Maries – A Philadelphia Phable is a Philadelphia musical that wears its civic pride on its sleeve. It’s a celebration of some of the things that make this city like no other, such as the Mummers, class warfare, and political corruption. This world premiere, with book, music and lyrics by Michael Ogborn, manages to be an enjoyable little musical – and even though it’s rather slight, it has so much down-home Philly charm that it ends up being a whole lot of fun.

The Three Maries tells the story of a mother and daughter known as Big Marie and Little Marie. They’re part of a blue collar Kensington family – Big Marie is a housewife and her husband, Banjo Eddie, is a Mummers string band member. Little Marie is a 23-year-old secretary (“I graduated second in my class from Katie Gibbs”) who has just landed a job as assistant to a mid-level City Hall bureaucrat. That position leads to both Maries meeting a third Marie – Queen Marie of Romania – during the Queen’s real-life state visit of 1926.

There’s not much to the plot; plucky Little Marie organizes a ball at the Bellevue-Stratford Hotel where she crashes high society, impresses the Queen, and enchants a visiting Count. Along the way she learns that the way to move into the upper crust is to lose her Philly accent – which leads to the funniest part of the show. Ogborn may love his city, but he loves teasing it too, and he sends it up beautifully in the song “The Diction Lesson,” a parody of My Fair Lady in which Little Marie learns how to lose a Philly accent: “When you say any word with O’s / Take the sound out of your nose.” (The song gets a reprise in act two that puts a delightful twist on the situation.) 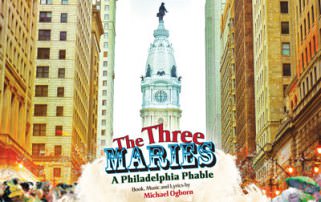 There are also some pretty, plaintive ballads for Little Marie, while Charlie Gilbert’s small onstage band, with its combination of reeds, strings, and even a glockenspiel, gives a nice Two Street bounce to upbeat numbers like “Jingle Dem Jewels.” And there’s some swell barbershop-style harmony on the Mummers’ ode to their uniforms, “Every Little Sequin.” (Ogborn and Ryan Touhey did the arrangements.) Ogborn’s stylistic range is pretty wide – other songs have hints of Jerry Herman and Kander & Ebb. There’s even a Romanian-style hora.

Yet Ogborn’s lyrics aren’t nearly as smart as his melodies. One song rhymes “bull” with “fall” and “see it” with “believe it.” When the Count sang a love song, I was waiting for him to rhyme “life” with “wife,” and sure enough, he did. And while the book has its share of funny lines, the jokes about accents eventually grow tiresome, and every plot development (along with nearly every supporting character) takes a predictable turn. (A running gag about Little Marie’s seemingly intelligent boss never being able to remember her name – he calls her Maureen, Mimi, and about a dozen other names – is groan-inducing.)

In addition, Director Peter John Rios’ production could use some tightening up. There were odd moments of silence at random moments throughout the show. And while there were references at the beginning to the Queen’s 1926 visit, it took me about ten minutes to realize that the show was actually set at that time, because the production has almost no 1920s flavor. For instance, the backdrop of Thom Weaver’s set is a 21st century Philadelphia skyline filled with skyscrapers; City Hall is the shortest building shown, even though it was the tallest building in town until the 1980s. In addition, most of Janus Stefanowicz’s costumes look contemporary – only two flapper dresses and a couple of hats look like they would have been around in the twenties. And trying to set the scene by twice showing a poster for a 1940s Gary Cooper movie on a video projection screen was ineffective.

The show also has a few moments where it works too hard to get an audience reaction. In the opening scene, Banjo Eddie (John Monforto) introduces his Mummer bandmates and tells the audience to “give ‘em all a big round of applause.” Later, during the closing number, actors stream into the crowd to goad people into dancing and waving their arms. The Three Maries is good enough that it doesn’t need to resort to tricks like this.

It also has a talented and dynamic cast. Rachel Brennan has pluck and nerve as the heroine Little Marie, and Mary Martello’s Queen Marie is imperious but unafraid to mix with the common folk. Best of all is Kathy Deitch, who’s a riot as Big Marie, dominating the stage with a brassy belt that refuses to be silenced. There’s also a strong supporting cast, notably Paul L. Nolan as the boss and Jeff Coon as the Count. (Coon doubles as a Mummer – who knew he was such a good accordion player?)

Will anyone outside Philadelphia understand those lyrics? Who cares? The crowd at the Prince Theater ate it up, and so did I.

The Three Maries – A Philadelphia Phable plays through January 10, 2016 and is presented by No Attytude Productions, LLC, performing at the Prince Theater – 1412 Chestnut Street, in Philadelphia, PA. For tickets, call the box office at (215) 422-4580, or purchase them online.