Stars of David: Story to Song—a rapturously beautiful concert musical now in a limited engagement at Theater J—is a unique blend of thrilling singing and insightful biography. Illuminating incidents from the lives of actual people—all boldface names and Jewish by birth—have been crystalized and lyricized into 14 songs sung simply and shimmeringly by a cast of four accompanied solely by a grand piano. 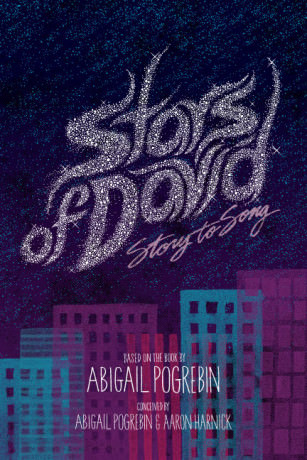 Stars of David: Story to Song is adapted from a book of the same name, a compilation of probing personal interviews conducted by journalist Abigail Pogrebin with an eclectic list of notables. Those whose lives are touched on in song in the show include many who are linked to the performing arts—Mike Nichols, Andy Cohen, Tony Kushner, Gwyneth Paltrow, Aaron Sorkin, Leonard Nimoy, Fran Drescher, Michael Feinstein, Norman Lear—and some public figures who are not—Ruth Bader Ginsburg, Gloria Steinem, Kenneth Cole, Edgar Bronfman Sr.

Pogrebin, who with Aaron Harnick conceived Stars of David for the stage, recruited a who’s who of songwriters to tell each celeb’s story. Among those who signed on are musical-theater marquee names Marvin Hamlisch (A Chorus Line), Jeanine Tesori (Fun Home), Sheldon Harnick (Fiddler on the Roof), Duncan Sheik and Steven Sater (Spring Awakening), and Tom Kitt (Next to Normal). The book—the show’s smart sequencing of songs and clever connective patter—is coauthored by Pogrebin and Gordon Greenberg. There are plenty of witty laugh lines throughout. (Barbra Streisand is referred to as “the patron saint of Jewish girls”).

Though on paper Stars of David sounds as if it could be a grab bag of tunes by dissimilar songwriters with disparate styles who just happen to have been given the same assignment, in performance the show plays completely of a piece—and more movingly than I could have imagined.

The company opens Stars of David with humor and sass, a song that riffs on Jewish stereotypes even as it owns a few. Then begins a cycle of songs, each about a revealing or surprising incident or experience in the life of each celeb.

We learn of Leonard Nimoy, for instance, how as a child he loved to perform magic—but an antisemitic trick caused him to quit.

We learn of Joan Rivers, queen of outrageous comedy and bling, that the high holy days were her respite.

We learn of Ruth Bader Ginsberg that she could not grieve her mother’s death because she was forbidden in the all-men minyan.

We learn of Tony Kushner he told his father that dealing with prejudice for being Jewish was good preparation for being gay.

We learn of Gloria Steinem that she identifies with the women who since biblical times have cooked the religious meals and set the ritual tables and served the presumptively privileged men.

We learn of Gwyneth Paltrow that the matzoh she eats is gluten-free.

And so the show goes, one startling or touching glimpse after another into lives we think of as lived dissimilarly in public yet all connected by the same inner question of identity.

The timing of Theater J’s programming of this show could not be more apt. While mainstream culture is awash in a secularized sectarian celebration that prompts no particular critical self-examination about what it means to be Christian in America, Stars of David shines a bright light on the meaning of Jewish identity that to this particular non-Jew felt awesomely universal.

True, Stars of David is descriptively a concert musical. But it is far more than meets the ear. It is meaning that meets the heart.

Running Time: One hour 15 minutes with no intermission.