William Shakespeare’s delightful comedy Twelfth Night rings in the New Year at Laurel Mill Playhouse. The run of the show cleverly opens on the actual twelfth night, which was the original intention of its playwright. Twelfth Night was written to be performed for the close of the Christmas season.

According to the calendar, the twelfth day of Christmas ends on January 5th with the counting of the twelve days of Christmas beginning on Christmas day itself. Twelfth Night is a reference to the twelfth night after Christmas Day, called the Eve of the Feast of Epiphany. It was originally a Catholic holiday, but prior to Shakespeare’s play, had become a day of revelry. What better way to celebrate a day of revelry than to go see a fun and hilarious comedy performed by a talented troupe of actors.

The play centers on the twins Viola and Sebastian, who are separated in a shipwreck. Viola (who is disguised as a boy) falls in love with Duke Orsino, who in turn is in love with the Countess Olivia. Upon meeting Viola, Countess Olivia falls in love with her thinking she is a man. The play expands on musical interludes and riotous disorder expected of the occasion, with plot elements drawn from the short story “Apollonius and Silla” by Barnabe Rich, based on a story by Matteo Bandello.

The mood is instantly set as beautiful Renaissance music plays in the house before the show. We are transported to another time and place both with the music and the simple, but lovely set. Kudos go out to Penny Martin for composing the music (she also plays the harp). The glorious set was built by Gretchen Hylton, Kurt Tesnau, Stevan Holmes, John Sorenson, Lori Brunn, Carol Sorenson, and Director Joshua McKerrow. The highlight of the set was a beautiful painted backdrop of a lovely Italian town and coast line. Tiny white Christmas lights strung along the ceiling from the stage to the front of the house added just the right touch to this charming set. A white lattice covered in ivy doubled as a wonderful sight gage later in the show as Sir Andrew, Sir Toby, and Fabian watch Malvolio make a fool of himself during his well-known monologue.

Costumer Katherine Beem did a wonderful job fitting the perfect costume to each of Shakespeare’s characters. From the clothing to the jewelry, not one detail was spared.

Director Joshua McKerrow clearly had an inspired vision in mind when he took on this classically funny piece of Shakespeare. His casting was spot-on, as well as the comic physicality of his direction. The comic timing of his actors and sight gags had the audience roaring with laughter, which totally befits this piece of theater.

Feste, played by Jenn Robinson, was the perfect Jester/Fool with her high energy performance. I reveled in her sense of mischievousness and her musical interludes. Lorrie Smith Saito (Maria) played Olivia’s lady-in-waiting with a devious twinkle in her eye as she toyed with Malvolio’s feelings over Olivia.

The cast is exceptional, with Kyle Kelley as Sir Andrew: the wonderfully dim-witted fop, Zack Pajak as Sebastian – Viola’s exuberant twin brother, and Kurt Tesnau as Malvolio: male confidant/servant of the lovely Olivia. All three of these actors have incredible high energy and the most amazing facial expressions that I have seen on the stage. It was a treat and a pleasure watching them perform their craft.

Whether you are a fan of Shakespeare or looking for a fun night of comedy, Laurel Mill Playhouse’s production of Twelfth Night should not be missed. 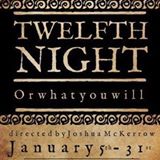