Because of technology, our lives move much more quickly than in the past. We can find out information faster, travel places faster, and even have packages arrive at our home faster than we ever could have imagined even 20 years ago. But at the same time, with these technological advancements, we now find ourselves glued to the screens of our smartphones instead of truly taking in the world around us. While watching The Vagabond Players’ spectacular production of Our Town, however, you are able to slow down and truly appreciate the intricacies of life that, as the character Emily asserts, would otherwise “go so fast.”

Thornton Wilder’s classic play Our Town tells the story of the town of Grovers Corners, New Hampshire. Broken up into three acts, the play primarily follows the stories of two families: the Gibbs family and the Webb family. Throughout the play, we watch and become incredibly attached to these wholesome characters, feeling their joy at life’s happy events and sadness as tragedy befalls the families.

In the character of the Stage Manager, who narrates the show, Josh Shoemaker is superb. He tells the tale of this small town in a smooth and comforting nature, and I could have listened to his stories for days.

Ryan Gunning is absolutely amazing as Emily Webb. Her portrayal of the innocent yet willful girl brought tears to my eyes, as she powerfully commanded the stage while discovering some hard truths about life in the third act.

William Meister is charming as the wide-eyed and kind-hearted George Gibbs. One of my favorite scenes in the play involves a man-to-man talk between him and his father Doc Gibbs, who is played by Meister’s real-life father, the fantastic Chip Meister. Having an actual father and son play these roles makes the affection between George and Doc Gibbs feel even more genuine.

Mark Scharf returns to the Vagabonds stage once again as Emily’s father, Mr. Webb. His quick timing and remarkable stage presence make him a joy to watch.

Playing Mrs. Gibbs and Mrs. Webb, respectively, are Kathy Foit Sewell and Carol DeLisle, who exude maternal warmth, making the audience feel as though they are wrapped in a giant, protective hug.

Our Town can be a challenging feat for a director, as it is meant to have little scenery and almost no props. Eric C. Stein’s direction of this cast, however, is nothing less than brilliant, instructing the actors to move about the stage in such a way that I could easily imagine them passing through doorways, stringing beans, and drinking strawberry phosphates. He also was a part of the team building the minimal – yet effective – set, along with Jay DeMarco, Stuart Kazanow, Angela Stein, Dennis Stein, Everett Christopher, and Roy Steinmen.

A.T. Jones, Mary Bova, and Ann Mainolfi provided the perfect period costume pieces for the innocent times of the early 1900’s, and Lighting Designer Joel Selzer tracked the travels of the sun through Grovers Corners with his soft and soothing lights.

Celebrating 100 years of continuous productions, The Vagabond Players have once again put together an incredible production of Our Town. It is one of the best productions I have seen in a long time, and if you do not have tickets yet, buy them now! 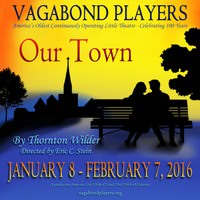 Running Time: Approximately two and a half  hours, including two 10-minute intermissions.