What starts as a delightfully wacky lark of well-told tales perfectly suited for theater buffs of a certain age or for those who know Broadway’s eccentricities through television shows such as Glee or Smash, turns on a dime into a deeply profound accounting of a man’s descent into a less glamorous secret life leading to his murder.

Simply put, Georgie, My Adventures with George Rose written by and starring Ed Dixon chronicles the exuberant life and times of Tony Award-winning actor George Rose, as represented by his real-life friend and mentee, Ed Dixon. For the comic majority of the production, Dixon is an eye-twinkling, hand-fluttering, drop-dead perfectly-timed presence as he dishes stories and memories.

In the production, Dixon plays not only himself over a twenty-year period starting when he was “young and pretty,” but also a variety of individuals who held Rose’s sharp as well as the impresario himself, George Rose.

In Georgie, Dixon describes his first meetings and working with Rose in an early 1970s. It was with a touring company production of Coco. At that time Dixon was “young and pretty” and in his early 20’s. Rose was about three decades his senior. Dixon makes clear throughout the production the value he placed upon George Rose’s approval.

For much of the show’s 90 intermission-free minutes, Dixon provides hypnotizing flash-and-dash of theatrical back-biting, fingernails-out clawing as he dispenses wonderful gossip and marvelously delivered punch lines.  Beyond Rose, Dixon plays many other characters, including Katherine Hepburn, Noel Coward, Richard Burton, and Laurence Olivier, among others. And let’s not forget poor old Ray Walston. Without props and always attired in one unchanging costume of black sweater and dark slacks (by Frederick P. Deeben), Dixon gives each character the tics and accents many should recall as he recounts inside stories for My Fair Lady, Pirates of Penzance, The Mystery of Edwin Drood, My Fat Friend, and Coco, to name just a few of the shows mentioned.

I can’t imagine that anyone who heads off to Signature for Georgie will ever think of mountain lions in quite the same way or “an alligator in a bar” story without thinking of the mischievous comic skills Dixon displays as George Rose. OK, now permit this as only one of the myriad of pin-prick sharp bon-mots that Dixon gives the audience. Rose is observing two men; one older and one younger, walking quite close together on a Greenwich Village sidewalk. It is in the days not long after Stonewall. He waits a beat, then says this: “When a woman gets older she has to open her purse.” The ARK audience the night I attended had a momentary gasp and then silence. Dixon as Rose just looked out into the audience with eyes bright and a chipper presence. The slightness nod to give permission to laugh. Priceless!

But, in the last 20 minutes or so of Georgie, the show turns dark. Dixon begins to provide shards and snippets about Rose as Rose ages into his later 60’s.

Dixon slowly unfolds the tale of his real life friend’s descent into a life that’s not comprehensible – a life that Dixon found repugnant. There are also descriptions of sex tourism and human trafficking by outside visitors to a small Dominican Republic community. It is far from the world of Nabokov’s Lolita, and as he speaks, Dixon’s feelings of disgust and revulsion are clear.  Darkness and shock descends. Looking directly at the audience Dixon asks himself and the audience, “How would you behave when told, ‘Oh my dear boy, that it is part of the culture. ”

Georgie, My Adventures with George Rose is directed with a light-hand by Eric Schaeffer. Schaeffer gives space for Dixon to perform what is his own very personal reminiscence.

“Georgie is the show that’s nearest and dearest to my heart, concerning, as it does, the amazing life and shocking death of my lifelong friend and mentor,” Dixon is quoted in Signature Theatre marketing material. Schaeffer also designed the backstage set design with rope riggings and a number of “ghost lights” at the wings. Chris Lee is credited with the lighting design that follows or spotlights Dixon as he dances about the stage or sits in a comfortable wing back chair at center stage.

Georgia: My Adventures with George Rose is exceptionally fascinating for the account of one human beings jumble of brightness and darkness. Ed Dixon has written and performed a play that is rare; a very personal account of a flawed friend and mentor who dies horribly, and is now buried in an unmarked grave in the Dominion Republic.

Georgie: My Adventures with George Rose is recommended for those who knew of George Rose and those who do not. It is a mostly delightful story about a great actor and a flawed human being. It will linger with you after the lights go up and you hit the winter chill. I will never forget it! 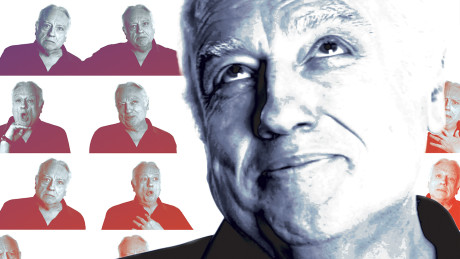 Note: A developmental workshop of Georgie: The Life and Death of George Rose was presented at The TriArts Sharon Playhouse in Connecticut in May 2015.

Learn more about the incredible career of Ed Dixon: