The cranes are up and building is moving afoot in the “new” Tysons in Fairfax County, Virginia. So, what will Tysons residents do for their near-by cultural arts fix and live performing arts entertainment addictions?

These questions led me to this ‘In the Moment’ column. This is one of my occasional articles about the business side of the performing arts in Northern Virginia; this time for 1st Stage. 1st Stage is closing in on its 10th year as the lone producing professional theater company in the Tyson/McLean area and member of theatreWashington. Its producing history is here.

Since its opening 2008-2009 season productions, 1st Stage has had a rapid rise with its growing subscriber base and audiences, has received a number of Helen Hayes Awards, and funding from the likes of the American Theatre Wing.

A major coup occurred when Wall Street Journal critic Terry Teachout visited 1st Stage and gave a rave review to its 2012 production of Side Man then also listed it in his year-end column.

And, notably not only is there abundant free parking at the 1st Stage venue, but now there is the nearby Spring Hill stop on Metro’s Silver Line. The Spring Hill Metro stop is just a few minute walk to the 1st Stage Theatre venue.

The specific jumping-off for this article came when I learned that 1st Stage was expanding in its current location. And, forever being a Cassandra, I, for one, of course, have wondered what development might have in store for 1st Stage at its current venue – so I asked Producing Artistic Director Alex Levy to tell us about the good news.

David Siegel: 1st Stage has recently added new space to its venue. Tell us about the new space.

Alex Levy: The new space is the storefront directly next door. It is roughly 4,000 square feet. It will be used in a variety of ways. Initially as a rehearsal room, shop and storage space. Eventually we hope to combine the spaces and move and expand our dressing rooms and green room and add additional bathrooms for the public. 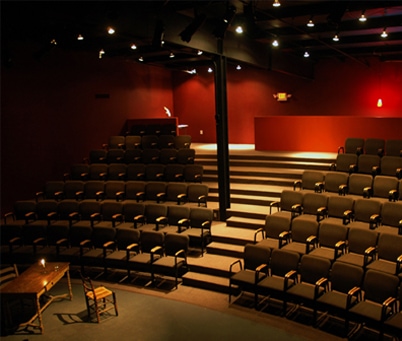 The current 1st Stage performance space has about 6,500 square feet and 110 seats.

What will the new space allow 1st Stage to do that it could not do previously?

When I got to 1st Stage, we only had one space to rehearse, perform and build our sets. This meant that we were constantly closing shows and keeping the space dark so we could build and rehearse the next one. The addition of the new space will allow us to keep shows running longer and to increase our programming with offerings in addition to our subscription series.

What kind of alternative programming do you have in mind once the new space is ready?

Last year we piloted a music series with the Virginia Chamber Orchestra and a teen program. Both were really successful and will expand this season. Additionally, we are looking to allow for experimental works from readings, cabarets, music performance and spoken word. Our hope is to continue to reach new audiences by providing a broad range of programming on our stage.

How is the building of the Tysons affecting 1st stage in audience growth and that may even affect your future programming given new residents moving to the area, and Metro’s Silver Line accessibility/walkability?

Tysons is changing and diversifying. Young families are living next to seniors and single young professionals. We are committed to being a cultural center for this changing community and thus are committed to providing a range of programming that will speak to the diversity of our community.

In 3-5 years, what are your plans for 1st Stage as a performing arts venue in the Tysons?

The honest answer is we don’t know for sure. There will eventually need to be a new home for 1st Stage.We are committed to Tysons and believe that there are potential partnerships that could make 1st Stage a cultural and business anchor in the new Tysons.

What would you like to share with us about your time as the 1st Stage Managing Artistic Director?

It has been such an exciting year for the company. It has been such an incredible joy to spend the year getting to know the 1st Stage family. Our patrons, board, staff and artists come with a sense of warmth and kindness. It is a spirit that Mark Kristan, founding Artistic Director of 1st Stage, built and I am very careful to protect. There’s really not another place like 1st Stage anywhere.

At the same time, it’s been a time of growth and expansion. We’ve been recognized with a series of honors that have inspired all of us to keep building for the future. There are exciting things ahead for 1st Stage and I’m honored to be a part of that.

Anything further you would like to provide about 1st Stage and Tysons?

Simply that as Tysons becomes “America’s next great city” the understanding that the arts will need to be a center of that city. We take very seriously the commitment to provide our community with a place where neighbors can come together and have a meaningful experience together. Where they can examine the world together and reconnect. Roads and trains are important for infrastructure but artistic institutions like 1st Stage nurture the soul and spirit of a community.

1st Stage’s next production is When the Rain Stops Falling, written by Andrew Bovell and directed by Michael Dove. The show opens on February 4, 2016.

Estimates are that by 2050 there will be a major population increase in the new Tysons – “America’s Next Great City.” The current population is about 20,000 residents today. Currently, Fairfax County, as a single political unit, has the largest population of any jurisdiction and one of the high median income levels of jurisdictions in the DC metro area.

Every production that 1st Stage produced in 2015 was honored by the staff of DCMetroTheaterArts in their Best of 2015 Honors: The Good Counselor, Doubt, Harvey, Old Wicked Songs, and Now Comes the Night.