As originally conceived by Edwin Abbot in the late 19th century, the novella Flatland is a biting satire about Victorian social hierarchies, played out in a two-dimensional world where women are simple line segments and men, polygons who strive mightily to move their families closer and closer to the perceived perfection of circlehood. Annex Theater’s current adaptation of Abbot’s work by Evan Moritz maintains the snark and social commentary, while moving the role of women more center stage – so to speak. As co-directed by Moritz and Isa Leal, Flatland is a visual delight with solid performances across multiple dimensions.

The cast is universally strong and necessarily versatile: all of them, with the exception of Caroline Preziosi, play multiple roles, sometimes with onstage costume and character changes. Where Abbot’s protagonist was a square named…A Square, Moritz focuses on a circle named Chromatistes (Preziosi) who, not satisfied to remain an unquestioning member of the elite priesthood class, is in the process of organizing a rebellion among the shapes by teaching those in the lower classes to paint their sides, thus obscuring what shape they actually are. 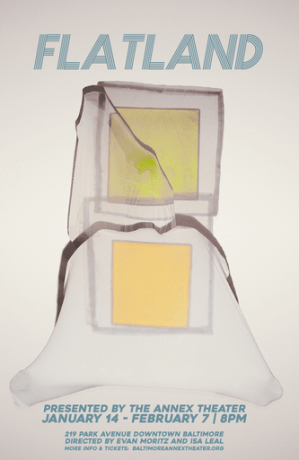 As the show opens, she has been captured and imprisoned by the Council, which consists of three truly terrifying yet hilarious circles played by Jess Rivera, Carly Bales, and Lee Conderacci. Her cellmates are Trignokratore (an isosceles triangle — the lowest of the lower-class shapes – played by Jonathan Jacobs) and the aforementioned A Square (Dave Iden), who has been arrested and taken away from his hexagonal grandchild (also Jess Rivera) for reasons he does not understand. Trignokratore serves as narrator, providing backstory that establishes the realities of the lives of the Flatlanders.

Just as Chromatistes is about to be executed, the action stops and the focus shifts to characters we have not yet met, G and G2, who are watching the goings-on and shifting events back and forth through time as though they were playing a video game. It turns out the pair (Ren Pepitone and Eric Park) are from the fifth dimension, and are observing events in Flatland from Timeland in the fourth dimension. They have become intrigued with Chromatistes and want to save her from her fate, but when numerous manipulations seem to result in the same deadly outcome, they send a droid Sphere (Trustina Fafa Sabah) into Flatland to rescue Chromatistes and explain to her that beings exist in dimensions other than hers.

If all of this sounds hard to keep track of, it is. In fact, much of the play is narratively incoherent, so if you are looking for a linear story. My advice: Don’t. There is so much to see and enjoy in Flatland if you just sit back and let it wash over you, without worrying too much about where you’re going.

Let’s start with the set. Annex’s new digs in the Psychic Readings building at 219 Park Avenue is thankfully larger than the old Chicken Box, but still small enough to be intimate. So how does one get across the idea of multi-dimensionality in such a space?

Set Designer Douglas Johnson has dealt with this by constructing what is essentially theater in the round in a long, narrow performance space.  The stage runs down the middle of the space with audience chairs on either side, sort of reminiscent of a runway at Fashion Week. Suspended on either side of the stage and capable of being raised or lowered to desired angles or even stowed away entirely, are two enormous projection screens on which Projection Artist Kevin Blackistone’s mesmerizing animations are displayed. In addition to being visually arresting, the projections give the audience cues as to in which dimension the characters currently are, and from whose perspective we are observing events. There is a particularly poignant moment where Chromatistes looks down and realizes what the denizens of Flatland look like from “Up”, a dimension she was not even aware existed.

Then there are the costumes. As designed by Susan MacCorkle, what could have been a monochromatic sea of white muslin gives form and dimensionality to the characters without the use of high tech. People in Flatland wear simple tunics shaped like squares, triangles hexagons and dodecahedrons (yes, there is one of those). Only the Council members seem to flow and change shape through the use of hoops under their costumes that let them remain generally circular while their constant shifting conveys that they are menacing and not to be trusted. The costumes become more and more complex and embellished as we move up through dimensions, and even more simplistic (but no less interesting to look at) we move down. At one point, Chromatistes encounters a trio of one-dimensional creatures in Lineland, whose costumes are lit by varying numbers of glowing “points” across the chest. It’s a delightful conceit. And watch for Fenir (also Dave Iden) in the ninth dimension; you won’t be able to take your eyes off him.

Finally and arguably most importantly, there is the way the actors move. Flatlanders move statically in one plane, Sphere rolls through space, the G’s move forward and backward and up and down and upside down and lift one another. But the most amazing aspect of the movement for me was how consistent they and the hierarchies between them remained as the characters moved through different dimensions. The G’s still move in their usual way in 3-D; they’re just restricted by not being able to jump through time and demonstrate that through their bodies. Chromatistes in the eighth dimension is still a two-dimensional creature and therefore moves with less freedom and fluidity than Sphere does.

In short, Flatland brings together a strong, multi-talented cast of performers and gives them a wonderland of sights and sounds in which to play. Go and see it and enjoy the spectacle, and don’t over-think it.

Flatland plays through February 7, 2016 at The Annex Theater performing at Psychic/Annex – 219 North Park Avenue, in Baltimore, MD. For tickets, purchase them at the door or online.