Alexandria locals have been eagerly anticipating the opening of Lena’s, the splashy new Neapolitan-style restaurant recently opened in the Del Ray neighborhood. All eyes have been trained on its build out, with area reports cheering the addition of large outdoor gas heaters, pretty landscaping and blazing fire pit for extended season dining. Situated near the Braddock Metro Station this spiffy spot is already abuzz with biz. A recent visit revealed its successful formula – reasonably priced chef-driven Italian dishes, handmade pasta, and a 4,800-pound wood-fired pizza oven in a large, yet smartly cozy, space. Featuring high ceilings and large windows facing the street, the main dining space and bar still manages to be cozy, even though it can easily accommodate 100 guests. For seasonal dining add another 68 to the spacious patio garden fronting the corner of Braddock Road and Mount Vernon Avenue.

Proud of their Italian heritage, the Yates, a well-known Alexandria family who are behind this effort, have named the restaurant after their late grandmother, Lena, a talented home cook whose ancestors hailed from Avellino and immigrated to our shores at the beginning of the 20th century. Early photographs of the matriarch and the De Gruttola and Forte families line the brick walls, bringing an air of intimacy to the space.

On board as Executive Chef is Mauro Molino, a 22-year veteran of the restaurant and hospitality industry. Molino is an energetic ball of fire with an infectious smile and an eagerness to inform customers of the nuances of this southern Italian cuisine. Molino, who spent the early part of his culinary career in Torino and later at the historic Hilton Cincinnati Netherland Plaza in Ohio, is a veteran of Washington’s better known restaurants including Rustico Restaurant & Bar, The Hamilton, T.J Stones, and Lia’s under Chef/Owner Geoff Tracy.

But it’s Lena’s time-tested recipes that prove the greatest tribute to her family’s Campania heritage – a legacy that is revealed in the restaurant’s menu – from gourmet pizzas, polenta fries, an impressive charcuterie board, sweet and spicy mussels, five types of paninis, and an array of fresh salads. Kale Salad with gorgonzola, poached pears, toasted almonds and buttermilk dressing is my favorite, as is a vegetable antipasto (who knew wood-grilled mushrooms were so irresistible?), grilled calamari and meltingly tender, fist-sized meatballs. Basic tomato “gravy”, as the cooked sauce is called, uses the sweet, lemony type of Roma tomatoes sourced exclusively from Lena’s region of San Marzano.

Desserts are totally unnecessary, but all in the name of research, don’t you know. Try the luscious Piedmontese chocolate terrine, called Bunt, and a Nutella pizza topped with white and dark chocolate chips and extra hazelnuts.

That Robert Wiedmaier likes to party like a rock star, is no surprise to fans of Villain & Saint where the chef/owner of the popular rhythm-and-blues venue can hang with his like-minded music lovers and fellow biker mates. Lately he’s taken the party to the rooftop of Urban Heights, his other Bethesda hot spot, where a lively scene plays out under a pavilion-tented bar whose moniker is ‘The Lotus Lounge.’ Heated for winter comfort, it offers a bird’s eye view of downtown Bethesda. The new restaurant features delectable Philippine-Southeast Asian influenced cuisine.

Island-influenced craft cocktails fired up the festivities while local musician Phil Kominski entertained the crowd with his fierce vocals and hot guitar licks.

It’s been a few years since we profiled Ype Von Hengst and his 180-degree lurch from the American style gut-busting dishes of his chain of Silver Diners to the lightened, seasonal, farm-to-table dishes he instituted at all his restaurants. Along with partner Robert Giaimo, the duo has since revolutionized what we think of as diner food to reflect a forward-thinking sensibility more in line with today’s calorie-conscious clientele. In addition to tweaking all aspects of American classic dishes – reducing the amount of salt and sugar and using healthier fats – they present a wealth of vegan, vegetarian and gluten-free choices.

Breakfast here starts at 7 am and extends till midnight with an all-day brunch to cover the in-between times. The flexitarian menu depends on local farms and suppliers – names familiar to those that shop at farmers’ markets and specialty gourmet stores. The passionate conceptualists are proud of their relationships with Firefly Farms for goat cheese, Parker Farms for produce and Richardson Farms for kale – all based in Maryland. Oysters come from the Chesapeake Bay, Black Angus steaks from nearby ranches. In Pennsylvania eggs come from Amish farmers at Martin’s Eggs, organic chicken from Bell & Evans Farms, blue cheese from Buck’s County and mushrooms from Basciani Farms. Edwards Virginia Smokehouse, maker of Surryano ham, a dry-cured, hickory-smoked, heritage breed pork that mimics prosciutto, provides the ham.

It’s well nigh impossible to relate even a fraction of the dishes listed on the five distinct menus. I will, however, make mention of the fact that all sodas, fresh-pressed juices and cocktails are made from scratch, teas are organic, and coffee is fair trade certified. www.EatatSilver.com

NatGeo Live! Series Taps into “The Science of Delicious” 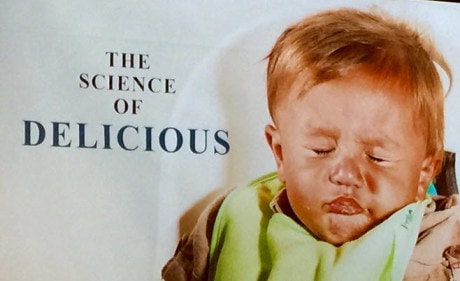 Do your brain or your taste buds interpret what you’re eating? Maybe it’s your DNA. This and other nerdy questions were explained and debated at a lively dinner last month at the organization’s dining space on 17th Street where guests sipped heavenly cocktails paired with hors d’oeuvres – ‘Walking on Water’, a mix of pear and basil tea with Calvados brandy, Walnut bitters and pear eau de vie; and the ‘Dorian Grey’ jasmine mate tea with Irish whiskey, peach eau de vie, salty foam banana cream and mace dust. Todd James, Senior Photo Editor at National Geographic Magazine, moderated the presentation along with Dr. Julie Mennella, Biopsychologist at the Monnell Chemical Senses Center in Philadelphia where she conducts research on taste, smell and chemosensory irritation.

Together they guided us on a virtual tour to explain recent scientific developments in the biological mechanics of how we taste, why we taste things differently from one another, and how some scientists are trying to make insect larvae taste palatable. Hilarious photos of babies responding to new flavors accompanied some of the photographs. Dr. Mennella explained, “The foods you are eating when pregnant are probably what you are going to feed your child.”

Particularly intriguing was our virtual visit to NOMA, in Denmark. Known as “The World’s Finest Restaurant,” Chef/Owner Rene Redzepi has taken the foraging of Nordic plant life into the realm of haute cuisine. N. B. This should not be confused with your grandma’s dandelion salad. NOMA has three kitchens. The first is what they call the ‘Science Bunker’ where experiments are conducted to determine food’s reaction to an array of scientific applications. Then there’s a development kitchen for conceptualization, and future implementation if all goes well. Lastly, there’s the restaurant kitchen where food is prepared by highly regimented cooks for elegantly plated service in the dining room.

Another fascinating virtual visit was to British celebrity chef Heston Blumenthal’s The Fat Duck restaurant to experience a fish course aptly named “Song of the Sea” which is served alongside a large Nautilus shell housing ear buds for listening to the sea.

Our two presenters were joined by Pam Caragol, Executive Producer of “EAT: The Story of Food” for National Geographic Studios/National Geographic Channel; Chef Myo Htun, Co-owner and Chef of Chaplin’s Restaurant, and Micah Wilder and his partner and brother Ari Wilder, Restaurateur and Co-owner of Chaplin’s who catered the event with an Asian inspired menu.

The carefully orchestrated dinner celebrated the Society’s December magazine’s feature story written by David Owen. The story is part of NatGeo’s Future of Food initiative, a special five-year project that seems to show how what we eat makes us who we are.

Zengo Maps Out an Asian Adventure

World-renowned chef, Richard Sandoval, is celebrating his Latin-Asian restaurant Zengo’s 10th anniversary in Penn Quarter by rolling out a new menu based on his recent culinary exploration of Hong Kong, Tokyo, and Thailand. Along with Chef de Cuisine Jason Streiff, they have seized on unique and delicious combinations of Asian-Latin flavors to dazzle the intrepid diner with bold, flavor-forward creations. Forewarned: Menu items marked with the Chinese character for new, are available now till the end of January and only available at dinner service after 5 pm.

I lost track of how many plates were set in front of us, but there were easily over a dozen. Especially memorable from the Sushi & Crudo Bar was the Thai seafood ceviche and grouper ceviche with uni, leche de tigre, cilantro and sea beans, that crunchy, lemony seaweed that I adore. All of Sandoval’s restaurants make one version or another of ceviche and they are all outstanding.

The appetizer and dim sum portion of the menu lists 16 different selections from bulgogi ribeye tacos and pork and foie gras shumai dumplings to Thai chicken empanadas and duck confit-daikon tacos. Slow-cooked pork ribs with roast garlic chipotle glaze and spicy cucumber pickle are sweet and sticky, exactly as it should be.

For a main dish, especially fun for a group, you may want to try the tempura whole fish. Ask what the chef is preparing as it changes daily.