Is a man, especially a black man’s ego and position diminished when he, his wife and son, live in cramped quarters with his mother and sister? Castaways Repertory Theatre explores this as well as other societal issues in its adaptation of Lorraine Hansberry’s A Raisin In The Sun.

Directed by Chaz Pando, the play is set in Chicago in the 1950s, where we find the Younger family, living on meager wages with big dreams.

Walter Lee Younger (Mack Leamon), wants better for himself and his family. Despite the obstacles of being black and poor, he knows there’s a better life out in this big, vast world. Because of this, his frustration is elevated when as he sees it, his family doesn’t support his dreams.

There is a line where Walter Lee says to his wife Ruth, played by Boneza Hanchock: “That is what’s wrong with the colored woman, they don’t build their men up!” This, after his continual rant about their miserable life.  To which Ruth attempts to deflect the conversation, and diffuse his mood, by telling him to “eat his eggs.”  Ruth wants better too. But Walter Lee can’t or refuses to see it because of his own misery. As I watched the interaction unfold between the two of them, I couldn’t help but wonder how many men today have the same frustration as Walter Lee.

Lena “Mama” Younger’s (Robin Dorsey), position in the family is clearly obvious -that of matriarch. She understands and feels the pain her son has. She wants him to take his rightful stance in their home. Her husband worked as a laborer and she saw the results that the tolling years did to him. There may be a way to help the whole family thanks to the hard work of her late husband. Dorsey pulls at your heartstrings as she tries to show her motherly sympathy.

Brittany Caldwell gives an outstanding performance as Beneatha (“Bennie”) Younger, the younger sister of Walter Lee. Everyone knows someone who, once education is given to them, their mind expands to the point of slight arrogance, and/or social consciousness. She does not hold back her opinions of the state of the family or the lack of knowledge her brother Walter Lee (Leamon) has. It was as if she channeled the late actress Diana Sands, who originated that role on Broadway and the movie with Sidney Poitier. Caldwell had the audience laughing when in one scene she says, “How do I manage to get on everyone’s bad side when I enter the room?” It is clear that her book and social conscious knowledge confuses her family and gets on their nerves.

One scene I thoroughly enjoyed was the scene in which Bennie (Caldwell) and Walter Lee (Leamon) do an African dance, after Bennie is gifted with an African wrap by her Nigerian college friend, Joseph Asagai, played by Doward Hicks. At that moment, you see Bennie and Walter Lee in harmonious sync, if only briefly.

Speaking of Doward Hicks – he gave an outstanding performance as Joseph Asagai. His African dialect was on point, and his wisdom, shared with Bennie during a moment of disappointment, was most poetic. 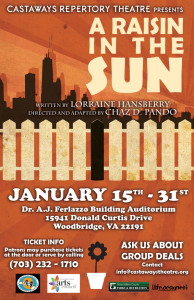 Bennie’s other suitor, George Murchison, a preppy, arrogant, and rich college boy, was convincingly portrayed by the accomplished (and Director) Chaz Pando. He is definitely seen as the “Uppity Negro.”

Eric Trumbull, who plays Karl Lindner, the “Welcoming Committee,” sent to meet and “welcome his potential new neighbors, was superb. His portrayal was true to form of a racist, that is not covert.

Rounding out the cast is the adorable Joshua Black who plays Travis Younger, son of Walter and Ruth Lee; Michael Patterson as Bobo (friend of Walter Lee’s) and Angela Moore, who plays nosey neighbor Mrs. Johnson. Moore engaged the audience with her humorous attempts to find out what’s going on with the Younger family. I especially enjoyed how she did her best to say she wasn’t getting in their business while snooping around their home, as she talked with Ruth and Lens.

There was a very tender moment between Walter Lee and Ruth, even though throughout the play they had been at odds with each other. I also enjoyed how the family synchronically dealt with Mr. Lindner on his initial visit.

Unfortunately, during my performance last night there were sound problems. The microphones muffled the actors, at times, and it was hard to hear them. And I strongly urge Director Pando to rethink using a real cigarette during the first scene when Walter Lee is smoking. An electronic cigarette may fair just as well, and as it will not leave a lingering scent as it did last night. I am confident that the sounds issues will be resolved before tonight’s next performance. And I know that the performances will get stronger as the run continues.

Castaways Repertory Theatre’s moving production of the classic is still very relevant. A Raisin in the Sun should be seen by every generation. It has lessons that still need to be learned and taught.

Running Time:  Two hours and 30 minutes, with a 15-minute intermission.

A Raisin In The Sun plays through January 31, 2016 at Castaways Repertory Theatre performing at the Ferlazzo Building – 15941 Donald Curtis Drive, in Woodbridge, VA. For tickets, purchase them at the door, or online.