“Opera is officially dead.”  So read the headline for Christopher Ingraham’s Washington Post Wonkblog. And in “one chart” yet. Ah, yes big data says it all neatly and with great certitude. Maybe.

Then I decided to do my own investigation. First I read and re-read page 332 of Stephen Sondheim’s Finishing the Hat for his learned opinions about opera, at least in reference to his own The Ballad of Sweeney Todd as a “dark operetta.”

And there is this from Mr. Sondheim:

For me, an opera is something that is performed in an opera house in front of an opera audience. The ambience, along with the audience’s expectation, is what flavors the evening.

Doesn’t sound like opera is dead in that quote.

So, from there I went to folk at the respected, four decades old Virginia Opera. The Company is a major organization with a working budget of $5.3 million with over 28 mainstage performances in locations such as Fairfax, Richmond, and Norfolk while reaching nearly 50,000 attendees. The Virginia Opera is “The Official Opera Company of the Commonwealth of Virginia” in recognition of the organization’s contributions to the Commonwealth and to the world of opera.

Over the past months through many interviews, I came to understand that opera is far from dead, especially as Virginia Opera is reaching out to new audiences with the goal set to become the American opera company with the youngest audience. Now that is quite a goal. This column is a look at Virginia Opera’s work to bring opera to younger and diverse audiences.

David Siegel: Virginia Opera has a goal to become the opera company with the youngest audience in America? How do you expect to accomplish this?

Howard Bender, Vice President Central/Northern Virginia Operations: We feel that this is our responsibility as the Official Opera Company of the Commonwealth of Virginia to our students and our increasing millennial audience. These individuals will one day become our future audience and stakeholders when we inspire them with life-changing performances, in a welcoming, inclusive atmosphere.

How will Virginia Opera reach that goal? 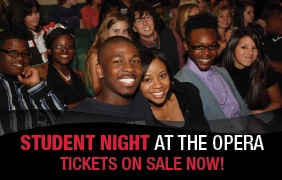 (2) The Next Generation @ the Opera Free Ticket Program, which pays for students to attend the Mainstage performances free of charge. Both programs were initially funded by Opera Board members, who have inspired Foundations and Corporations to match their support, to serve more and more students.

How is Virginia Opera reaching out to Northern Virginia schools?

Robert Cinnante, Statewide Director of Education & Outreach: Virginia Opera’s In-School Touring Program has become increasingly active in Northern Virginia schools. This activity has been furthered by a growing initiative called Adopt-A-School that began this past spring, with a collective sponsorship from residents living at the Woodlands Retirement Community in Fairfax. The initiative is in response to reductions in public arts education funding, offering individuals and groups an opportunity to fund free in-school performances in their respective communities. A generous contribution made by the Niles Trust earlier this season will offer free programs to 25 schools in Arlington and Alexandria over the next two years. Two schools have benefited from four free programs to date in Fairfax, and we are working to significantly expand that, and to bring the initiative to surrounding areas, such as Loudon County.

I understand that Virginia Opera’s “Dr. Opera” has been writing operas to be performed before younger audiences? What has he written? Where have they been performed in Northern Virginia? What has been the reactions of the school students to operas in their schools?

Robert: Glenn Winters, is affectionately called “Dr. Opera”, a term of endearment that I believe characterizes his multifaceted background as a composer, singer, pianist, and lecturer. Dr. Winters writes children’s operas that are not only age appropriate, but that offer relevant ties to the Virginia Standards of Learning (SOL’s).

Since joining the staff of the Virginia Opera in 2004 he has written seven operas, including two new premieres this season, A Trickster Trilogy and Deep River: The Marian Anderson Story.

A Trickster Trilogy was performed this past fall at several elementary schools throughout Arlington, Alexandria, and Fairfax, as well as a free community performance held at the Stacy C. Sherwood Center. 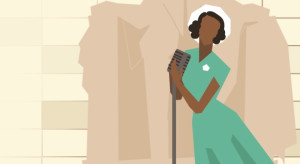 Deep River: The Marian Anderson Story will make its Northern Virginia debut later this month on Sunday, January 31, 2016 at 4 pm, as part of Music & Arts at Providence, at Providence Presbyterian Church.

The reaction from students has been overwhelmingly positive. Each performance is filled with a mix of laughter and awe, and often prompts engaging, and sometimes entertaining questions from the kids. Educators have also shared their enthusiasm for these programs. Pam Farrell, Arlington Public Schools Arts Education Supervisor, said the following: Arlington Public Schools is grateful to the Virginia Opera and their work in bringing opera into the schools. Their programs are a wonderful complement to our music education and bring learning to life. Exposing students to these kinds of rich opportunities is an important part of a child’s education and we are appreciative of the high quality programs Virginia Opera provides.

Howard Bender:  The Woodlands Retirement Community in Fairfax was the founding entity of the Adopt-a-School initiative, led by a Northern Virginia Board member (Mr. Sean Foohey) who is a resident there. The Woodlands “adopted” elementary schools right in their own neighborhood. Then, the Niles Trust stepped forward to fund 25 elementary schools throughout Arlington and Alexandria.”

Given all of the arts and entertainment options they have, why should younger audiences attend an opera performance?

Adam Turner Principal Conductor and Artistic Advisor:  Live performance, and especially opera, gives folks the opportunity to unplug. To disconnect from their devices and smartphones for a couple hours. To sit back, relax, and be mesmerized by this unique art form and the power of these voices. There’s nothing quite like experiencing the sheer power of the unamplified human voice, singing over a 50-piece orchestra in a 1,400-seat theater. It’s an Olympic feat, and these artists are true athletes, capable of vocal acrobatics unparalleled in any other art form. And the raw emotion and broad palette of expression offered by opera singers – it’s simply divine.

Russell P. Allen, President & CEO: The art form of opera is not a static art form. Within each production of any opera, opera shows itself as an art form that twists and turns in both story-telling and musical expression that moves in ways that are totally recognizable yet unique, and that expresses characterizations and emotions that are part of the human condition – still today, no matter what the operatic setting. Virginia Opera strives to ensure each of its productions is full of motion and does not get bogged down – in keeping with a 21st Century lifestyle. Millennials, once given the opportunity to attend, would find a totally relatable experience that speaks to their personal lives. Opera is an art form for everyone.

Anything additional you would like to tell DCMetroTheaterArts’ readers?

Russell P. Allen: Virginia Opera has been through some challenging times over its 40 year history, but one constant throughout its many years of producing almost every style of opera has been its commitment to excellence – from the quality of singer to the artistry of designers, from the spirited direction to the beauty of the orchestra, and from the accessibility of its productions to the sublime musical experience. Virginia Opera today continues to enhance its artistic commitment to excellence – a commitment that never wavered even in the Opera’s times of most difficult financial challenge. Virginia Opera is now cited by many as a ‘better than ever’ opera-going experience. Hopefully Virginia Opera audiences will be saying the same thing ten, twenty and fifty years from now. 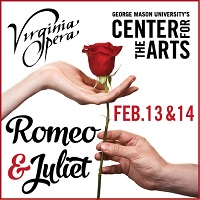 Note: Next up for Virginia Opera is Romeo and Juliet. It will be performed at the George Mason University Center for the Arts on February 13-14, 2016.

LINK:
If you are interested in opera, got to Opera America for oodles of information.