Though the week started on a tragic note for rock fans with the loss of David Bowie, a sliver of light has emerged for local audiences in the person of Greg Bowen, currently playing the title role in Chronoshred The Adventures of Stardust Lazerdong at Baltimore Rock Opera Society. Bowen is not only a born rockstar, he would almost seem to conjure the physicality, artistry, energy, and hypnotic baritone of the young Starman himself. 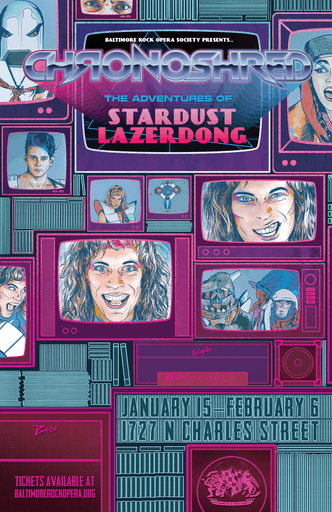 Fans of BROS will not be disappointed with this latest addition to their original rock musical canon, which is perhaps their silliest installment to date (and that is really saying something). Part video game, part Adult Swim cartoon, Chronoshred is a compilation of four musical episodes about time-traveling space rocker Lazerdong (Bowen), who, along with his band members – Ampdroid (Griffin Stanbro), Squiddrummer (Kathy Carson and Julia Pickens Sine), Rocky (C-mo Molloy), and Novalux (Elias Mays Schutzman) – does battle with the evil Nebulous (the always hysterical Eric Poch) and the soul-sucking corporate overlords at Biznizcorp.

Sound confusing? Well, it kinda is. And as the title suggests, it boldly goes on to explore strange new phallic worlds. But at the heart of the chaos, co-director/lead writer Phil Doccolo and his team have crafted a story that smartly addresses an inner-conflict shared by nearly every artist in the Universe: retain creative freedom or sell out for profit?

Doccolo and Co-Director Danielle Robinette shepherd the BROS all-volunteer army of musician-composers and designers who dazzle the senses with pounding rock, lazers, life-sized puppets, and all manner of light-up electronics. Special mention must be made of Multimedia Director Bob Rose and his video team for contributing top-notch video and animation installments throughout the show, suggesting that Stardust Lazerdong may enjoy an extended life on youtube.

The standouts in the excellent cast are Bowen as the swaggering space rocker, and Melissa LaMartina as Agent Mercury, a femme fatale who shifts from enemy to ally and back again. Bowen’s charisma and commanding stage presence carries the show to glory, and he displays an impressive vocal range from crooning baritone to wailing head voice. LaMartina creates an amusingly quirky villain, and delivers the most thrilling metal vocals of the night in “Agent of Vengeance.”

In a cameo highlight of the show, Harrison Ford gives the evening’s most natural performance as Actual Dog.

Chronoshred is a blast, make no mistake, though its Kryptonite might be “too much of a good thing.” The show clocks in at an epic 3 hours (including intermission), and didn’t necessarily leave me wanting more. You have to respect BROS’ commitment to epic ensemble storytelling and DIY spectacle, but must also wonder what a single shrewd playwright or director might do to streamline this script and eliminate pace-shattering scene changes.

Case in point: Chronoshred closes with ten minutes of transcendentally kickass rock… followed by an interminably long set change and anti-climactic epilogue scene. Would that only it had gone out with a bang like the legendary Mr. Bowie did in his own final act!