In Part  4 of  a series of interviews with the Director and cast of Kensington Arts Theatre’s The Laramie Project, meet Clancey Yovanovich.

Joel: Please introduce yourself and tell our readers where they may have seen you perform before on local stages? 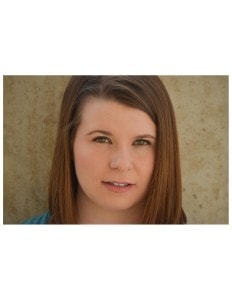 Why did you want to be part of the cast of KAT’s The Laramie Project?

Being in The Laramie Project is unlike any other production. It is bigger than all of us. Those lucky enough to be a part of such a special theatrical work join a family with a critical understanding of the power of theatre. Unlike more traditional works, The Laramie Project focuses on the influence one individual can have on a community, without giving that individual a voice in the play. A hopeful and change-provoking piece that captures the magnitude of death through the people affected… who wouldn’t want to join such an important work?

Who do you play in the show and how do you relate to your characters?

We each get to play a couple characters, but I definitely relate most to Romaine Patterson. A close friend of Matthew’s, Romaine went on to be a radio personality, and a strong activist for LGBTQ rights. She attibutes the start of her career to Matthew’s guiding light. Like Dennis and Judy Shepard, Romaine saw the loss of her friend as an opputnity to spark change in this country. I share her optimism, her sense of humor, and her ability to make light out of any situation.

How much did you know about Matthew Shepard and what took place on October 6, 1998, and what has been the most interesting thing you have learned about him and that event since you started working on this production?

I learned a lot about Matt as a freshman at AU. Between my Women and Gender Studies classes and Theatre classes, The Laramie Project served as a critical source throughout my college career.  That being said, Matt was more of an idea before I started working on this show. Now, thanks to reesearch, character study, and the brilliant documentary Matt Shepard is a Friend of Mine, he is a fully-fleshed out human being.

What have been some of the challenges you have had during rehearsals and how did Director John Nunemaker help you to resolve them and to mold your performance?

What has impressed you most about your fellow cast members?

Oh my gosh… where do I begin? Their passion, their dedication, the massive amount of homework they’ve all done on their characters, on the trial, and on Matthew himself. This cast is living and breathing Laramie, and it feels great to work with such passionate people.

What do you want audiences to take with them after seeing you perform in The Laramie Project?

For me, it all goes back to Matthew’s mother, who says, “Go home, give your kids a hug, and don’t let a day go by without telling them that you love them.” Life is fleeting and unpredictable, and we all spend too much time wrapped up in ourselves. The Laramie Project is an example of how many people are affected by the loss of one human. It is a plea to value the living; a plea for honesty, for kindness, and for understanding.

The Laramie Project plays from February 5-20, 2016 at Kensington Arts Theatre – performing at The Kensington Town Hall –  3710 Mitchell Street in Kensington, MD. For tickets call the box office at (206) 888-6642, or purchase them online.

Interviews With the Cast and Director of Kensington Arts Theatre’s ‘The Laramie Project’: Part 2: Zoe Bulitt.

Interviews With the Cast and Director of Kensington Arts Theatre’s ‘The Laramie Project’: Part 3: Natalie McManus.

Interviews With the Cast and Director of Kensington Arts Theatre’s ‘The Laramie Project’: Part 4: Clancey Yovanovich.