When I first saw Love in Time of HIV in May 2012, I was deeply impressed. Giving voice to a young generation’s encounter with the health crisis left them by their elders, the play by Kieyontaye D. Johnson-Carter seemed to me to evidence extraordinary courage and originality.

Love in Time of HIV was performed one night only, in a shoestring production starring young people from DC’s SMYAL (which then meant Sexual Minority Youth Assistance League and now stands for Supporting and Mentoring Youth Advocates and Leaders).

After greatly admiring Love in Time of HIV at the time, I wrote this blog entry about it:

The set was three rundown sofas. The lighting could not be drearier: on-off church-basement fluorescents. The uncomfortable seating: metal folding chairs.

But once the powerful storytelling took off, I was as emotionally hooked as I have ever been in the theater.

The center sofa is home to Dre, a brother who has sex with men, and Lily, his unsuspecting and very pregnant wife.

The sofa stage right is the apartment in which Dre has set up Brandon, his 17-year-old lover, who is HIV-positive and devil-may-care about using protection.

The sofa stage left is where Jason, Lily’s brother, lives with his lover, Liam, who is HIV positive and desperately afraid of infecting Jason.

The central unbilled character in this drama is, of course, the HIV virus. By the end of this giftedly written two-act passion play, we have witnessed—as if attending a Greek tragedy—the preventable pathos of that protagonist’s rampage.

Author and director Johnson-Carter has crafted a funny, sad, street-smart, and cinematically succinct parable that the audience connected to as if it was the saga of their lives….

This play must go on. It is a hauntingly honest cautionary tale. It is a tribal anthem for a generation.

Thankfully the play has gone on. Love in Time of HIV will receive a full production at Anacostia Arts Center This Thursday through Sunday-January 28 to 31, 2016. In anticipation of that run, I invited the playwright to join me in a written Q&A for DCMetroTheaterArts.

John: Love in Time of HIV obviously comes from a deep place. Would you talk about that—why you had to write it?

Kieyontaye: Love in Time of HIV came from a very deep and oftentimes dark place. When I started writing this project it was totally just for cathartic release. There was not a finite outline, no format that I had intended to follow. I just simply wanted to get my thoughts and emotions out of my head. I didn’t care where they went, just as long as they weren’t clouding my vision and thoughts. I had to write this show not only to tell the story of a young person living in an area where HIV has run rampant but also to tell the story of the human spirit; the resiliency that we, as humans, possess is quite remarkable. I felt that the African American experience dealing with HIV, homelessness, and homosexuality in general wasn’t being adequately portrayed in art, film, and television. As a community we like to keep those things that aren’t as beautiful swept under the rug. I am the one that wants to uncover that ugly inconvenient truth and make it known.

What has been happening with the play since that first production I saw? And how has it changed?

Evolution. With the first production, being that it was a youth production, it had to be very PG; PG-13 is the most I could push it. I couldn’t go into depth with conversations, or expose too much skin. The characters couldn’t be perceived older than let’s say 24. And it was very hard; I felt stifled artistically, because those things that I wanted to say I couldn’t say due to the nature of my audience. Now with this 2016 show I have pushed the envelope to a degree of uncomfortability, vulnerability, so that my characters are exposed and naked to the point that you don’t have to desire to know more about them in the moment that you are watching. Their motives are clear, their history is palpable, and they’re honest with each other now. So that when you leave the theater you may draw your own conclusion about what happened to them. Issues of dealing not only with love but life in general are there, from adoption, to marriage, divorce, regret, reconciliation, murder, and ultimately forgiveness. The band of characters has changed as well, it went from a cast of ten to a cast of four, focusing more on the male and female interaction. Especially on a condition that is widely perceived as something that still is a major problem for homosexual males.

Would you talk a bit about the creative team you’re working with now for the production at Anacostia Arts Center—who they are, and what you like about them?

In the past I went through other production companies. I wasn’t really satisfied with the interpretation of the script. It seemed to be suffocated with superfluous “glamour” and trickery. So that is how Bellavision Studios came about. I with the help of my cast members and a few of my friends are the production team. I didn’t know how ambitious I was being. I often sit back and ask myself what am I doing. But Bellavision Studios isn’t just a production company; it is like a master class for theater. I am using this opportunity (Love in Time of HIV) as a learning tool for those that want to learn how to light a stage, and who want to learn how to act, write, and play all the roles that make a successful production. For some of my cast this is their first time on a stage in a theater, doing what they love, and that is performing. I am overjoyed to give them the platform to pursue what they love to do.

Your title, Love in Time of HIV, beautifully echoes that of Gabriel García Márquez’s novel Love in a Time of Cholera (El amor en los tiempos del cólera). Was there significance for you in that parallel?

Outright there was no significance in the parallel for me. I didn’t read the novel or see the movie when I first started writing this show. Not until later when someone brought it to my attention did I seek it out. My title Love in Time of HIV came about as more so wanting to capture the essence of what the show was about, love, and what its characters were dealing with, HIV. The themes of seduction, deconstruction, passion, aging and death, life vs. existing, and lastly faithfulness vs. infidelity, are all present, just in a different magnitude and form.

I remember that the audience seemed really engaged with the first production of Love in Time of HIV I saw, and very affected by it. There have been some other productions since, right? What have you learned from these audiences about what the play means to them, how it touches them?

There have been some other productions since. In the Chicagoland area, and in my hometown of Grand Rapids, MI. Based on the reception I learned that this is a story that people not only want to hear, but need to hear. All of these players in the cast speak individually to a member of the audience regardless of race or gender or sexual orientation. We all seek what this ensemble of vibrant people are seeking, which is genuine love, affection, and understanding from another person that we are emotionally bound to. The impact at the end has really got me overjoyed; people are talking about HIV and prevention again, testing and protection, even leaving with a sense of urgency to have conversations about sex and sexual activities with the youth in their families, which was my mission. It’s taught me that this story instantly makes an audience cling to the characters and they become attached to them and begin rooting for them for their happy ending. They experience those ups, they wallow in the lows, and they cheer them on with passion, which is what I wanted to accomplish in writing this show. The show that many are going to see this go-around is very different. It has a smaller cast, it has more informational-fueled scenes than the show had before. The show has evolved with me as a writer/performer, and what I feel should be said. Each and every time this show is presented to the public I want it to be a unique experience. You may never see the same show twice. 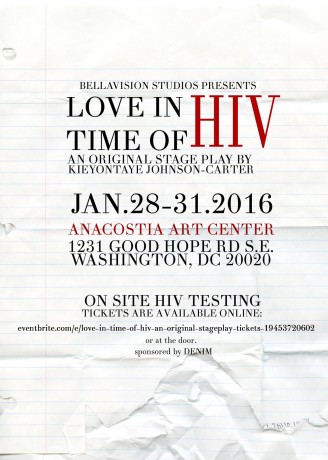 Love in Time of HIV plays January 28 to 31, 2016, at Bellavision Studios performing at the Anacostia Arts Center – 1231 Good Hope Road, SE, in Washington, DC. (Performances start at 8 pm; beginning at 7 pm there will be organization tabling). For tickets, purchase them online.