Grab your hoverboard and blast over to Greenbelt Arts Center to see its latest show, Zombie Prom. It’s totally nuclear, a tongue in chic fusion of Happy Days, Grease, and The Walking Dead.

Zombie Prom with a compact cast of ten, some playing multiple roles, is deftly directed by Jeffery Lesniak. It’s the oft told tale of how things can get toxic if you decide to go steady with someone you met during an air raid “duck and cover” drill.

And, no matter the era, the show crystalizes the classic teenage behaviors of insensitivity, indifference, self-centeredness, insecurity and, on the turn of a dime, understanding and open-heartedness. Totally.

The Greenbelt Arts Center is a high-ceilinged, black box three-quarter thrust theater seating about 105. The set was minimal: a row of lockers were suggested by a line drawing painted on the rear wall. The logo of Enrico Fermi High School, an atom, was painted on the floor.

Fermi was the “beloved father of the atomic bomb.”

A vintage bomb shelter sign was suspended on one of the room’s two support pillars. Each pillar sported a semi-circular covered bench at its base. The cast stashed small props underneath.

A rolling cart doubled as a reporter’s desk and a school podium.

That paucity of props put the burden of recreating an era on the cast – and they did it winningly.

And, yes, the audience was the biggest prop. They laughed, chortled and clapped throughout – just like one imagines a 1950’s audience would behave during a filming of an early I Love Lucy episode.

The costumes, including flouncy circle skirts and leather jackets, by Jeaneo Binney helped the audience do the Time Warp effortlessly.

The best part of the show was the cast’s voices. Gorgeous, clear and un-miked.

Jonny, the lonely orphan, is played by David Colton, in real life a Navy enlistee from Sheboygan, WI, stationed at Ft. Meade. He has a set of golden pipes and projects a hauntingly winsome persona.

Another gorgeous voice belongs to the amazingly talented high school junior Emily Small, who portrays the heroine Toffee. (She might also have a second career as a future Muppetmaster.)

It takes a few minutes to realize two members of the cast are siblings: Melanie Pino-Elliott as Candy, and Rachel Pino-Elliott, who portrays Ginger. 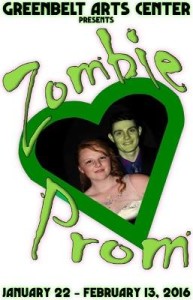 The girls have sweet treat names like Coco (Kaela Monsanto), Candy (Melanie) and Ginger (Rachel). Their voices are Supreme.

Add one more J: Jonny Warner (David Colton) is the new kid at school, an orphan who transferred from another school. Sporting a leather jacket with “Jonny” emblazoned across the back, he struts a bit like Danny Zuko from Grease or Jim Stark – James Dean’s Rebel. His voice is a Thriller.

During an air raid “duck and cover” drill, Jonny meets and instantly and passionately falls in love with exuberant, bubbly Toffee. She returns his affection. Jonny states she is “the only person who ever loved me.” He presents her with his beloved leather jacket.

Jonny’s also caught the eye of Miss Strict, who takes an instant dislike to him. She is incensed that he’s ruined a “biblical” name by removing the “h” from the word “Johnny” embroidered on his jacket. Miss Strict decides he’s a bad boy. She, along with Toffee’s parents, ostracizes him. Ganging up on Toffee, they forbid Toffee from seeing him.

The two almost-lovers express their anguish in “The C Word.”

Miss Strict demands adherence to her increasingly harsh, ridiculous rules. She is a mean bully – and she possesses a bully good voice to belt out her threats in “Rules, Regulations and Respect.”

When Toffee returns the leather jacket to Jonny and breaks up with him, he is devastated. Tearfully, Jonny runs to the nuclear power plant and hurls himself to his death in its nuclear waste treatment facility.

A reporter for Exposé, Eddie Flagrante (smarmily portrayed by R. Brett Rohrer) gets a tip from Josh about the suicide. He’s busy fielding phone calls with tips he considers nonsense.

“Nixon? Vice President Nixon,” Eddie yells in disbelief at one caller. “That man’s character is unimpeachable.”

To another – his own mother – he roars: “Joan Crawford beats her kids? That woman’s a SAINT!”

By the time Eddie begins sniffing out the sad story, Jonny has been buried far out at sea in a lead-lined coffin.

Toffee however, is spooked. She keeps hearing Jonny’s voice. She reveals she loves him.

But, you can’t keep a musical’s male lead down: Jonny’s ba-a-a-ack before Act I ends.

Albeit sporting glowing green skin and a stiff, jerky walk.

He presents himself first to Toffee in their duet, “The Voice in the Ocean.” Jonny tells Toffee he decided to return from the dead when he heard her voice.

Not only is Jonny alive – he’s lively and wants to return to high school to graduate and take Toffee to the prom.

No surprise, Miss Strict goes nuclear. “If this freak wants his diploma, that’s what Catholic schools are for!” And … (Gawd this sounds so familiar …”This is NOT a democracy. This IS a high school!”)

Eddie’s advice to Jonny? “No more being kicked around just because you kicked the bucket!”

And, that’s just the beginning.

Will he get to go to the prom? Will he go with Toffee? Will the principal have a melt-down? Will there be a prom?

Promenade over to Greenbelt Arts Center and find out.

(But, bring your own wrist corsage!)