There is a moment when Director and performer  John Moletress and Jocelyn Kuritsky are dancing on stage left. Caridad Svich is singing her original song “Low Valley” on stage right. As the dancers circle around each other, Kuritsky would weave one arm around Moletress, and as she moved left, Moletress would weave right, around her into the space she created. The result is an illusion of continuous movement in which one cannot tell whose limbs belong to whom. If a space opened from one’s body, the other would fill it. However, as connected as they were through movement, Moletress and Kuritsky never physically touched. As they continued to move in perfect time, there was always that disconnect.

Written by Caridad Svich and featuring the collaboration of Director/Performer John Moltress and New York based performer Jocelyn Kuritsky, Sanctuary (An American Psalm) is a work-in-progress presentation produced by Svich and NoPassport theatre alliance, in collaboration with Missing Bolts Productions, and currently playing as apart of Arena Stage’s Kogod Cradle Series. This is an epic poem transformed into a performance piece that explores how we come to terms with different “sanctuaries” in our lives, and investigates our relationships with places, friends, and strangers within those moments.

‘Sanctuary (An American Psalm) focused specifically on Texas, and sprinkled throughout the piece were songs with gospel and religious undertones, with lyrics by Svich and music for four of the five by Broken Chord.

The dance played well to the overall concept of the piece. Towards the beginning, Svich asked the question, “What comes to mind when you think of Texas?” The three performers on stage shouted different ideas, ranging from temperature and politics, such as thoughts about border control and the “Bush dynasty.” While a group of people can feel a connection through a common state, there is still that disconnect. Everyone has his/her own image that comes to mind, and that idea will influence their interactions.

The dance also played well to the concept of the Kogod Cradle Series, which is meant to help support the development of new and emerging work. The Series inspires risk-taking, and aims to explore and interrogate a diverse range of work from both visiting and local artists by providing them with a space to continue to build and test their performances in front of audiences.  The dance showcases two performers supporting each other in trying to find that connection. The Series offers an opportunity for artists to work together to find the right feel for their works, as it did for Svich.

Moletress even played to that concept through his staging. Throughout the piece, he and Kuritsky would wonder about the Cradle, as if they were finding the right place for that given scene. Moletress even experimented with sharing his lines from different locations in the room, thus emphasizing a feeling of being surrounded by the “sanctuaries” he was describing.

The staging resembled that of a rehearsal process, with trial and error. Some spaces worked for a given scene, and when movement felt necessary, the performer would take the impulse. This worked, particularly in light of the aims of the Kogod Cradle Series. In a space meant for risk-taking, I appreciated feeling involved in the creating process.

One aspect I would have liked to see more of was clarification or specificity in characters. For example, usually the performers would each play a specific character in a given scene. This helped carry the story along, but sometimes a character would transition from one performer to another, which resulted in a little confusion. I am sure that in the future, once the play is further on its feet, the staging could provide aid.

Arena provides an exciting opportunity for artists to create in a performance setting, which adds a useful element to the rehearsal process. I know I personally am curious to see what future new pieces evolve out of this program.

Sanctuary (An American Psalm) closed on Sunday, January 31, 2016 at Arena Stage at The Mead Center for American Theater-1101 6th Street, SW, in Washington, DC. For information on future events with the Kogod Cradle Series, see their website. 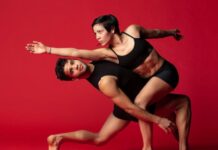 Havana-based Malpaso Dance Company steps out at The Clarice 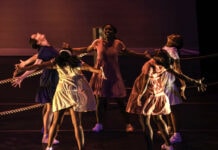 ‘The Other Side’ at KenCen turns a kids’ book into uplift