Opera Lafayette’s second offering of the season, Emmanuel Chabrier’s Une Education Manquée, is a far cry from the massive spectacle many people assume is synonymous with opera. This little known 19th-century opéra-comique is refreshingly simple in its concept and presentation and all the more charming for it. A desk, two chairs, several books, and a single pianist (an excellent Jeffery Watson) are all this production needs to tell its lively story. I do wish, however, that the story had a bit more meat to it.

Une Education Manquée, or An Incomplete Education follows young lovers Gontran de Boismassif and Hélène de la Cerisaie who, despite rigorous schooling, are finally left alone on their wedding night feeling woefully unprepared. Conductor and Opera Lafayette Artistic Director Ryan Brown has chosen to precede the one-act opera with an introduction of four rarely heard animal songs by Chabrier. These songs play like lovely nursery rhymes thanks to a valiant effort by Brown and Director Bernard Deletré to connect this prologue to the much richer operette by contextualizing them as stories told to the two protagonists throughout their childhoods.

The two grow up side by side and eventually marry, and then their problems begin! The two immediately realize they don’t know what to do on their wedding night. Both suspect there is something more to marriage than just being called husband and wife and frantically seek advice from their elders.

Gontran, played by the exceptional soprano Amel Brahim-Djelloul, receives a letter from his grandfather which he reads in song, desperately hunting for any kernel of advice. The letter concludes that his grandfather has nothing left to teach the young boy, but Gontran disagrees! He furiously writes for his tutor Pausanias (sprightly baritone Dominique Côté) to return and instruct him in these finer details of married life.

Upon Pausanias’s return, he is flabbergasted to be accused of miseducation. The two share a delightful comic duet listing every single subject the boy has covered with his tutor, with one thing conspicuously missing. Alas the poor tutor knows nothing of it himself and runs off to consult with his colleagues.

Meanwhile, Hélène, sung by playful soprano Sophie Junker, is terrified of the thunderous storm that has begun. The only thing that helps is moving close to Gontran, touching, hugging, kissing….ah ha! As the lights fade down, the couple is finally on to something!

The evening is full of excellent vocal performances from all the performers, Brahim-Djelloul and Junker in particular. Their clucking and cotting in “Cocodette et Cocorico” is hysterical and and the charming naïveté of “Faisons-nous petits” is a joy to watch.

These strong performances are supported by very uncomplicated costuming by Patricia Forelle and lighting by Colin K. Bills. Poor syncing of English supertitles during several scenes occasionally obscured meaning, though the plot was simple enough to follow in despite of this glitch.

An Incomplete Education is a light and charming evening, filled with strong performances, coupled with Chabrier’s playful compositions.

Running Time: 60 minutes, without an intermission. 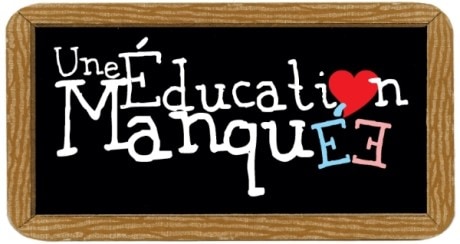