The Fairfax Academy for Communications and the Arts’ Academies of Musical Theatre and Dance made one of history’s darkest and most beloved musicals a vehicle to showcase the talents of their student performers with their production of Cabaret, directed by Michael Replogle, with music direction by Luke Frels and choreography from Andrea Heininge.

Cabaret, with book by Joe Masteroff and music by the celebrated composing duo of John Kander and Fred Ebb, opened on Broadway in 1966 and garnered eight Tony Awards, including Best Musical and Best Score. It was further popularized by the 1972 film adaptation (which won 8 Academy Awards), directed by Bob Fosse and starring Joel Grey as the Emcee and Liza Minelli as Sally Bowles. The story examines the microcosm of a seedy Berlin nightclub (the “Kit Kat Club”) in the early 1930s as it is affected by Weimar Germany’s descent into Nazism.

The set, designed by Michael Replogle and Cindy Jacobs and constructed by Bob Cahoon, approached the show traditionally, with the orchestra far upstage on an elevated platform underneath a lit marquee sign for the Kit Kat Club. The anchoring acting space was comprised of an earthy-toned back wall with contrasting glittery ribbon curtains covering two center-flanking doorways. Vintage bar sets were nestled in either side of the stage, and miniature café tables with accenting red bottle lamps filled the pit in front of the stage. The lighting was designed by Dylan Adams, and the sound was designed by Dwaine McMillan.

The costume design by Andrea Heininge and Hailey Parker-Combes was more concerned with utility than period detail, with Kit Kat Girls in a uniform of short black bodysuits with cut-out backs and mesh paneling. The characters operating outside of the Kit Kat sphere were dressed with simple pieces in a neutral tan, cream, and forest green palette, with occasional appearances of fitted, modern-looking dark suits breaking the pattern.

Hank Von Kolnitz carried the show as the ghoulish, omnipresent Emcee. He crafted a strong character arc from a campy, hypersexual clown, as in the delightfully raunchy act one number “Two Ladies,” to a brooding, mournful figure, bare-skinned with smearing stage makeup, in the haunting “I Don’t Care Much,” which suited his swooping and smoothly drawn vocals perfectly.

Madyson Hanton’s portrayal of Sally Bowles was rather demure, with a tone of speech bringing to mind black and white screen sirens of the 1930’s. Her vocals, however, were bombastic; her masterful mix made the final notes of the show’s titular song shine. Hanton’s slinky crooning and the Kit Kat Girls’ skillful chair-top balancing acts in the ensemble dance number “Mein Herr”  provided much-needed tension and energy that was often missing from the first act.

The peak performance of the dance ensemble was found in the polished Kickline opener of act two. Dance sequences incorporated into “Maybe This Time” and “Married,” (usually solo and trio songs, respectively) had fluid and precise technical execution from the featured performers, but often felt like distractions rather than expressive manifestations of the songs’ themes.

Sam Cornbrooks, in the role of American novelist Cliff Bradshaw, was earnest and natural, serving as a strong foil to the show’s more colorful characters.

As innkeeper Fräulein Schneider, Phoebe Davidson hit her stride in the second act, shedding her casual manner to reveal tumultuous rumination in “What Would You Do.”

The Fairfax Academies of Musical Theatre and Dance made the Kit Kat Club their own with their production of Cabaret. 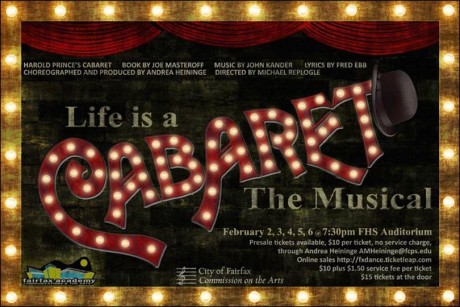 Remaining performances for Cabaret are on Friday, February 5th and Saturday, February 6, 2016 th at 7:30 PM at Fairfax High School – 3501 Rebel Run, in Fairfax, VA,  just off of Old Lee Highway. For tickets, purchase them at the door or online.Tickets can be purchased online.