Dismal, drab, and grimy, the site-specific setting of Iron Age Theatre’s Philadelphia premiere of Dogfall in the subterranean space of The Power Plant, sparsely furnished with two metal cots, piles of sandbags, stacks of footlockers, and crates of canned peas, immediately plunges the audience into the bleak life of soldiers holding post in an underground bunker. Realistic military uniforms and weapons, and the sounds of explosions, gunfire, sirens, and screams create the terrifying aura of raging combat, from which there is no escape. Ever.

An intensely disturbing deconstruction of war by Australian playwright Caleb Lewis, the metaphorical title refers to a fall in which competing wrestlers in a match touch the ground simultaneously. There is no winner, because no one remains standing; both sides go down together. But in Lewis’s increasingly absurd and nightmarish sequence of 23 vignettes in two acts, filled with dense and complex imagery, dogs and other species of animals fall like rain from the sky, landing dead and injured on the ground, and symbolizing all the nationalities of human casualties whose identities are inscribed on their dog-tags.

Powerfully directed and designed by John Doyle, with costumes by Rory Zummo, sound by Ben Levan, lighting by Doyle and Levan, and fight choreography by AJ Gagliardi, the passionate antiwar production is performed by a riveting cast of three, who enact a series of short horrific scenes from the endless conflicts that have plagued our modern world. Beginning in 1916, with the bloody Somme Offensive of WWI, through 9/11 and its ongoing aftermath, black-and-white projections on the back wall identify locales and battles of the past 100 years. And though the sites and conflicts change, the three characters fight in all of them, assuming different ethnicities and religions in each, but retaining the same names and roles, as their emotional and psychological states shift, develop, and deteriorate with the unrelenting horrors of war.

Adam Altman plays the brutal soldier Will with ferocious zeal, gleaming eyes, and sardonic humor, as he recounts the atrocities he’s witnessed and the acts he’s committed, until he grows weary of war and longs for the peace that will never come.

Luke Moyer is Jack, a shell-shocked medic who is there on the front lines to help, but has come to question the honor and virtues of war–until he doesn’t. And Jenna Kuerzi portrays the enemy Alousha, a frightened and fragile boy soldier and the perennial outsider who inspires both the compassion and the hatred of Will and Jack. All three turn in affecting performances that convey the violent desperation, unbearable loneliness, apocalyptic devastation, and full-blown insanity of war, in contrast with the upbeat tempo and optimistic lyrics of Irving Berlin’s 1926 hit song “Blue Skies” that repeatedly plays in the background.

Employing the creativity of the theater to decry to the destructiveness of battle, Dogfall is a potent reminder of Bertrand Russell’s insightful observation: “War doesn’t determine who is right–only who is left.”

Running Time: One hour and 50 minutes, including one 10-minute intermission. 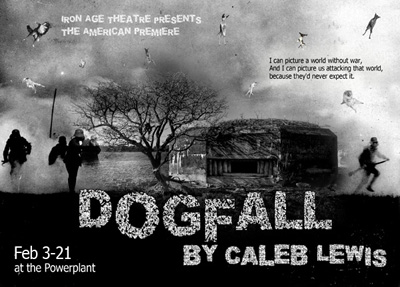 Dogfall plays through Sunday, February 21, 2016, at Iron Age Theatre Company, performing at The Power Plant – 233 North Bread Street, in Philadelphia, PA. For tickets, purchase at the door or online.