It’s not every day you see a musical with an all-female cast and a female-led creative team, but Bucks County Playhouse has given us one with their latest offering. A Taste of Things to Come depicts American life in the 1950s and 1960s from a female point of view. It’s the story of four young women who belong to a cooking club, and how things change for them – and for the country – when they come to realize that there’s more to life than cooking the perfect casserole.

Act One is set in 1957 in Winnetka, Illinois, in the kitchen of Joan, a bubbly housewife who leads a cooking club called “The Wednesday Winnetka Women.” One by one we’re introduced to the rest of the club. There’s Connie, an expectant mother whose sweet smile is hiding a big secret. There’s Dottie, a frantic mother of four who’s the joker in this deck. And there’s Agnes, who has dreams of going into show business, even though the others think she should focus her energies elsewhere: as Dottie tells her, “You’re 23 years old – you’re practically an old maid!”

On this particular Wednesday, the women have gathered to devise recipes for a Betty Crocker cooking contest, and they dream about what they would do with the prize money; “I could build my dream bomb shelter,” says Dottie. A Taste of Things to Come is filled with topical jokes like that – there are references to Jack Paar, Rock Hudson, and the Kinsey Report throughout Act One.

At the end of the first act, the cooking club breaks up (for the flimsiest of reasons), and Act Two picks up the action in 1967, when Joan, now a successful journalist, decides to reunite the old gang. We see how the four characters have changed over the course of the decade – “we went from Betty Crocker to Betty Friedan,” says Joan – and how they have dealt with the changing role of women in society. (The play’s structure has some similarities to Jack Heifner’s play Vanities, which tracks a group of young women across a slightly later timespan.)

Debra Barsha and Hollye Levin wrote the book, music, and lyrics for A Taste of Things to Come, and they’ve created a quartet of characters who represent different elements of the then-burgeoning women’s movement. Yet while it’s a mostly enjoyable show, it’s too lighthearted for its own good; it would be more satisfying if the characters and their conflicts had more depth. Some of the show’s more troubling elements – like Dottie’s racism and her addiction to diet pills – are only addressed briefly before the show moves on to something happier.

For instance, during Act Two, the characters get into a heated argument about the Vietnam War; they’re furious at each other for about a minute, and then they suddenly, with no explanation, switch back to being carefree best friends again. A Taste of Things to Come is an entertaining show, but it would be work better if its characters acted more like real people do.

Barsha and Levin’s music does a good job of evoking the musical styles of the fifties and sixties, and adds greatly to the show’s appeal. The opening number, “Cookin’!” sounds like it could have been performed by Little Richard. “Dear Abby,” a salute to the ladies’ favorite columnist, is a doo-wop ballad. “Didja Hear?,” about suburban gossips, borrows the bass line from Peggy Lee’s hit “Fever.” “In Limbo” is, you guessed it, a Caribbean limbo number. When we move on to the sixties in Act Two, we get “The Whomp,” which puts a feminist spin on Barry Mann’s “Who Put the Bomp,” and a raunchy blues number called “Food.” Most of the songs aren’t especially distinctive in their own right, but they’re pleasant pastiches that will keep audience members tapping their feet.

The best song in the show is “Blessing in Disguise,” a power ballad with a lovely melody. While it’s a song about female empowerment, the generic lyrics – “Looking back, it all makes sense… I can do anything I want to do… Now I see/It was my destiny” – could really be about almost anything. That’s a big problem with A Taste of Things to Come: most of the songs have nonspecific lyrics that don’t advance the plot. Yet Barsha and Levin have also provided a book that’s filled with funny, memorable lines.

They’re helped by a winning cast. Allison Guinn is a comic sparkplug as Dottie; the scene where she loses a battle with a bean bag chair lets her show off a great talent for physical comedy. Erin Mackey is adorable as Connie, with a tart delivery that gives her one-liners some bite. Ariana Shore, a late addition to the cast, brings lots of warmth and sass to Joan. Gina Naomi Baez is saddled with playing the underwritten and overbearing Agnes, the show’s least appealing character. (She’s also burdened with the show’s weakest song, “I’m Outta Here,” a number about how much Agnes hates her home town and everyone in it.) All four performers are wonderful singers, especially Baez and Mackey, who do some powerful belting on “Blessing in Disguise.”

Lorin Latarro directs and choreographs, and she’s provided a swift, elegant production that is entertaining from start to finish. Her choreography is consistently creative, revisiting vintage dance styles and making them seem fresh.

Steven C. Kemp’s kitchen set is a shiny marvel in the populuxe style, blending turquoise cabinets with space age wallpaper. During Act Two, the back wall flies away to reveal the show’s tight, four-piece, all-female band, led by Lena Gabrielle.

And Dana Burkart’s costumes are authentic for both eras – Donna Reed dresses for the fifties, psychedelic caftans and love beads for the sixties. (Dottie’s style doesn’t change for the sixties, a telling indication that she’s stuck in the past.) 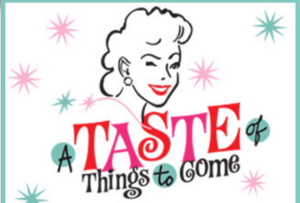