First performed in 1836, The Government Inspector–playwright Nikolai Gogol’s unrelenting farce on socio-political corruption in Imperial Russia–has long been considered an important precursor to Theater of the Absurd of the mid-20th century. Idiopathic Ridiculopathy Consortium, Philadelphia’s only company devoted exclusively to the absurdist genre, captures all the pandemonium of Gogol’s influential work in a madcap production with a serious message about the effects of government misconduct and the foolishness of human behavior.

Based on a true anecdote that renowned Russian writer Alexander Pushkin recounted to Gogol, the play is set in a provincial town anticipating the visit of an incognito inspector from the central government. When Ivan Khlestakov, a stranger from St. Petersburg, arrives in the village, the unsophisticated citizens and unscrupulous local officials mistake him for the high-ranking bureaucrat, and a chaotic comedy of errors ensues.

In her signature style of fast-paced high-decibel absurdity, Director Tina Brock brings hilarity to the mayhem, but also cogently exposes the folly and greed of the self-serving characters, as the panicked townsfolk ingratiate themselves to the presumed inspector–played with gusto by the irrepressible Andrew Carroll–in an attempt to convince him to overlook their misdeeds, incompetence, and mismanagement, while he delights in their flattery, encourages their bribes, and derides their stupidity (“What a bunch of cabbage heads!”).

Brock’s energetic ensemble, several of whom play multiple roles, keep the ridiculousness building and the laughs coming with their rapid-fire delivery, quick changes, over-the-top emotions, and the sprinkling of their speech with a pretentious use of French words, phrases, and (mis)pronunciations (by which Gogol lampooned the contemporary Russian taste for elevated French culture). Bob Schmidt and Tomas Dura, as local landowners Bobchinsky and Dobchinsky, execute side-splitting bits of physical comedy, walking into doors and bumping into each other, with Schmidt, in his role as the postmaster Shpyokin, running nonsensical laps around the audience and across the stage. The terrific Paul McElwee, Jennifer MacMillan, and IRC newcomers Francesca Piccioni, Christina May, and Jack Tamburri, round out the zany cast of desperate sycophants, who finally realize that they’ve been duped when a gendarme (Brett Mapp) announces the imminent arrival of the real government inspector.

A colorful scenic design by Lisi Stoessel comprises an upstage wall decorated with illustrations from antique Russian playing cards and punctuated by hidden doors and windows through which the actors appear. Period-style costumes by Janus Stefanowicz define the characters’ locale, classes, and professions, and Brock’s sound design employs a background score from Wes Anderson’s 2014 film The Grand Budapest Hotel, composed by Alexandre Desplat, to evoke an Eastern European tone.

If you think, because of its historical context, that The Government Inspector’s theme of rampant graft and corruption is no longer relevant today, you haven’t been paying attention to local city politics or the current presidential campaign. 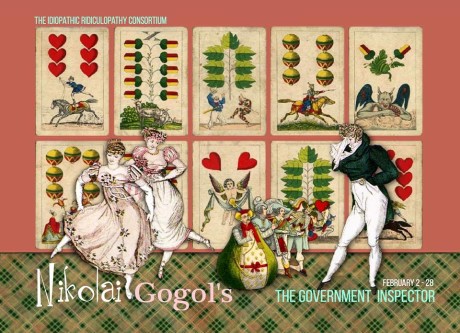