In the Venn Diagram of your brain on burlesque and your brain on standup, Barenaked Comedy is the intersection. It made for an interesting energy flow at BNC’s first show in their new home, the Bier Baron, as both the burlesquers and the comedians addressed pretty much the same life issues we all deal with – you know,  self-acceptance, relationships, demonic possession.

Opening the show, co-producer and co-host Mindi Mimosa did a number to Lady Gaga’s “Hair.” Aptly named as she’s truly bubbly, Mimosa gleefully revealed the less clothes she had on the hairier things got, all the while with a hundred watt smile.

Mimosa’s partner in Barenaked crime, Co-Producer/Co-Host comedian David Coulter had the unenviable task of following, but brought it home reminiscing about conversations with his mother about his own conception, not at all awkward, with a great payoff citing Mom’s cautionary proverbs about the effects of alcohol. “Remember Dear, Vodka made you” is now forever hashtagged into my brain.

Back to the burly q, Diva Darling entered, a vision in red satin robe and gloves and Monroe tresses. But poor Darling had a “Fever,” the Michael Bublé version, and under the red satin robe was a hospital gown. As her act, um, feverishly, progressed Diva chugged cold meds until she finally passed out.

Thank goodness BNC is now at a venue that provides a doorman as their doorman from their previous venue, Dee Ahmed, turns out to be a really funny comedian! Not to knock his doorman skills, I’m sure they’re amazing, but he definitely belongs onstage. Comfortable and charismatic, he gave us a crash course in being a sommelier when you’re maybe not so sure about wine and reminded us how Adele makes us all feel inadequate.

Keeping the energy up, Dainty Dandridge did a fan dance to the Post Modern Jukebox swing cover of Sisqo’s “Thong Song.” Dandridge has some great physical comedy skills and true to the song Baby did indeed make her booty go da na da na.

After a quick booze break, or intermission as I’ve heard it called, Valarie Morgalis killed it, performing to a medley of Ella Fitzgerald’s “I’m Gonna Wash That Man Right Outa My Hair” that, pun intended, bled into the Weather Girls “It’s Raining Men” as if to say “Relationship problems? There’s a simple fix.”

Perhaps it’s her background as a journalist, but Natalie McGill has a gift for observing major WTF situations and reporting them with a descriptive deadpan that’s a thing of beauty. Beware late night farmers’ markets and prayer circles masquerading as city council meetings!

Dainty Dandridge follows in the footsteps of blueswomen like Bessie Smith or Lucille Bogan. For her second number she sang a song about her dear, old grandmother called “Grandma’s Coochie” and I’ll just leave that at that.

Diva Darling closed the night with an awesome Evil Dead act to Pink’s “U + Ur Hand” where, after reading The Necronomicon (honestly when will these kids learn?), her hand becomes possessed. It’s a great premise for a burlesque act and like Evil Dead’s hero, Ash, she results to desperate measures when her hand, well, gets out of hand and equips herself with the right tool for the job. Unlike Ash it’s not a chainsaw … 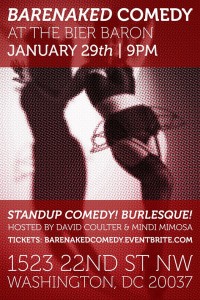 Barenaked Comedy played for one-night-only on January 29, 2016 from 7:00 PM to 11:00 PM at The Bier Baron Tavern – 1523 22nd Street, NW, in Washington, DC. Barenaked Comedy is a really fun night of comedy and burlesque, although be prepared to do some gear switching between burlesque brain and standup brain. For more information and to stay abreast of upcoming shows visit their website