The annual Maryland Opera Studio New Works Reading has a twofold mission – to give young artists the opportunity to collaborate with living composers and to give the composers an opportunity to have their works debuted before an audience. This year’s New Works Reading is especially unique – MOS Director Craig Kier commissioned the work specifically for the nine singers in the first-year class, asking for a piece that would address contemporary world issues.

Michael Oberhauser, who received his Doctorate of Musical Arts from the University of Maryland in 2015, teamed with librettist Shannon Berry to create Another Country, a critique on American culture that explores the difficulties American veterans face upon returning home from war. Directed by Justina Lee and Nick Olcott, this production, although still a work in progress, highlighted the talents of the MOS students.

Set in a bar in a non-descript American town, the opera centers around two couples whose relationships are strained by the horrors of war. Hugh (James Smidt) doesn’t want to tell his therapist Michelle (Esther Maureen Kelly) about the fateful day his Humvee blew up. His wife Silvia (Alexis Aimé) has begun “to understand she could not understand” what her husband went through. Duncan (Mark Wanich) turns to alcohol to cope, frustrating his wife Izzy (Sarah Best). They share their feelings with bartender Becca (Jenny Anne Flory) to cope, but Becca has some problems of her own. She’s just broken up with her boyfriend Jordan (Miles Herr), who turns to harassing other women like Missy (Amanda Baker).

The opera also takes a critical look at American consumer culture. Jordan produces commercials featuring actor Peter (Tshegofatso Moeng) praising the “power, possibility, and freedom” that come with a bank card. These traits, emblematic of the American dream, are not so accessible after all, especially for the men scarred by war.

One of the most compelling scenes was a conversation between military wives Izzy and Silvia. Tired of putting on a strong façade for others and for the media, they are able to find affirmation in each other. Their relationship felt genuine and real. Aimé has an agile, strong coloratura voice and articulates text effortlessly, and Best’s mezzo-soprano voice is mature and warm.

Inspired by American modernist composer Charles Ives, Oberhauser weaves patriotic tunes in and out of the music, often giving them a minor or contemplative twist. The libretto juxtaposed “all-American” images – “the splash of a swimming pool, fireworks” with the horrors of war. Oberhauser and Berry used nursery rhymes, such as “Little Miss Muffet” and “All the King’s Horses” to add commentary and transitions between scenes, and Oberhauser’s plaintive, chant-like settings of the familiar rhymes were at times haunting.

The opera certainly tackled difficult contemporary issues, but I felt that 75-minute opera packed in too many issues – veterans struggling with post-traumatic stress disorder, the state of women in society, American consumer culture – into a short period of time. I would be interested in seeing what a longer opera could do to delve deeper into these issues; or perhaps just concentrating on one issue, like PTSD, in a more in-depth manner. 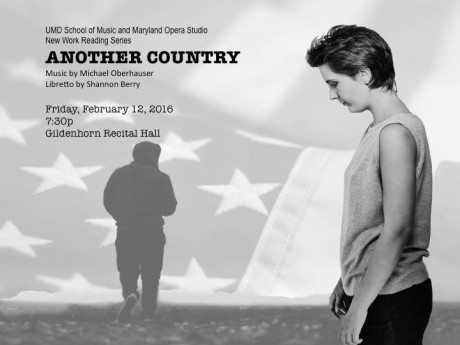 Another Country played one night only on Friday, February 12, 2016 at The Clarice Smith Performing Arts Center’s Gildenhorn Recital Hall – at the intersection of Stadium Drive and Route 193 (University Boulevard), in College Park, MD. For tickets to future Clarice events, go to their

LINK:
A Report on ‘A Fire in Water’ at Silver Finch Arts Collective’ by Terry Byrne.