One of the American theatrical classics, Our Town, written by Thornton Wilder, and well-directed by Amanda Hartman, comes to life in a charmingly simplistic and emotionally resonant production at the Apollo Civic Theatre.

Written by Thornton Wilder, Our Town is a slice of small town life from 1901- 1913 in Grover’s Corners. The town citizens reveal every day problems and pleasures, led by the character the Stage Manager. The story focuses on the lives of two families, the Webbs and Gibbs, as they join together as George Gibbs and Emily Webb fall in love and eventually marry.

Noah Gross makes an incredibly wholesome and earnest George Gibbs. He clearly shows the transformation as the character matures and had a very emotional and harrowing final scene.

Delaney Herold is very sweet and demure as Emily Webb and she performed a fantastic monologue near the end of the show. Gross and Herold had a lovely scene together in Act II in a flashback when the characters first realize they love each other and display their exceptional chemistry.

Richard Harner is a kind and quirky father figure as the town doctor, Dr. Gibbs. Sandra DeRocha is charmingly gentle and kind as his wife, Mrs. Gibbs. Harner and DeRocha have a wonderfully poignant scene near the top of Act II as they discuss their wedding and their son getting married.

Todd Robertson displays an excellent stage presence as newspaper editor, Mr. Webb, with his excellent timing. Lauren R. Hugg is delightful as his wife, Mrs. Webb. Her no-nonsense demeanor and practical, sharp delivery was perfect for the maternal character.

Amelia Marino is perfectly precocious as George’s little sister, Rebecca and Gentry Jackson is adorable as Emily’s younger brother Wally. Sarah Celec is outstanding as the Stage Manager. She has a natural command onstage and an exceptional warmth and charisma while delivering her many monologues with information about life in Grover’s Corners, the characters and life in general. Celec was entirely comfortable in the most difficult role in the show as a constant balancing act between interacting with the audience as a narrator and participating as a character in the story.

Larry Marcille is a very macabre and sarcastic church organist, who is (more importantly) the town drunk and casts a dark shadow on bright and cheery Grover’s Corners. Kathy Bost is thoroughly enjoyable in an amusing character role as opinionated neighbor Mrs. Soames.

The staging for the production was very well-executed and made great use of the large theater space. Actors use the main aisles, which go through the audience in the theater, for many entrances and exits to make the audience feel as if they are part of the town. A very unique choice was having the actors continually cross the stage during the pre-show and intermission, to make it seem as though daily activity was still occurring in the town, even when the performance was not occurring. The scripted portion in Act I involving actors throughout the audience was especially well done in the large space, though the pacing of the show considerably slows during the “information segment” about Grover’s Corners, while trying to keep the audience engaged.

Perhaps the most famous aspect from Our Town is the use of mimed props and minimal scenery, and the actors and minimalist technical elements do not disappoint. The actors very realistically mimed all of the historical props and set pieces they needed to interact with.

The set, constructed by Henry Becker, Bob Fuegi, and Larry Mayou, is charmingly simplistic, with the back brick wall of the theater exposed and only some wooden tables, chairs and two ladders onstage. Lighting, designed by Michael Noll, is also fairly simplistic, with noticeable shifts for scenes featuring the Stage Manager addressing the audience and scenes in the graveyard in Act III. Costume design by Barbie Gross and Kathy Bost, are all period appropriate dresses and suits, with subtle hints of color and changes to the style as the characters grow older. 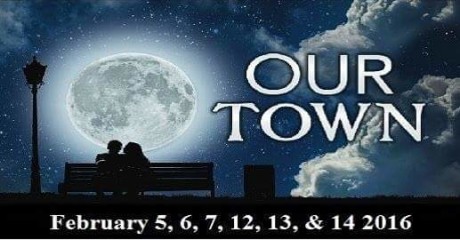