The Columbia Festival of the Arts under Executive Director, Todd Olson, continues to bring the Howard County Area some of the greatest performers of our time. Since the Festival started 30 years ago in Columbia, Maryland, they have showcased some very recognizable names. They still do but now instead of one month a year, it is four times a year.

This is their first Winter Festival, Winter Beyond the Blues. Sunday night for Valentine’s Day their gift was The Monterey Jazz Festival on Tour. This is collection of some the greatest jazz artists presently performing. This year the group consists of Raul Midón (vocals and guitar), Ravi Coltrane (tenor and soprano sax), Nicholas Payton (trumpet), Music Director Gerald Clayton (piano), and Joe Sanders-Bass and Gregory Hutchinson (drums). These artists bring with them the influence and teachings of some the most revered names in jazz, including Ravi Coltrane’s late father John Coltrane, Hancock, Marsalis, Ray Charles, Brubeck, Santana, and others.

The sextet’s program consisted of some traditional popular music, like “What is this Thing Called Love?” by Cole Porter  and “Bye, Bye Blackbird” by Ray Henderson and Mort Dixon and the jazz classic “‘Round Midnight” by Theolonious Monk, reharmonized by Herbie Hancock.” Original pieces included two original pieces by Midón, “All that I Am” and “If Only.” Midón, who is blind since birth, simultaneously played the guitar and bongos as well as using his unusual vocal ability to create trumpet-like music when he was not singing or scatting.

The sounds from the group were virtuosic and fine examples of the iconic jazz festival. The blends between the sax and the trumpet and the piano and bass were probably some of the best in progressive jazz. The drum solos were dramatic. Midón’s solo stint included his triple talent and was the highlight of the evening.

Thanks again to the Columbia Festival of the Arts for bringing the group to town and in the sub-zero wind chills of the weekend, brought us a little California sunshine.

If you missed the Monterey Jazz Festival on Tour, be sure to catch the programs for next weekend, including the film Fruitvale Station, the collection of plays, Black Lives, Black Words and the dramatic reading, Columbia Voices, and looking forward to April, the Spring Festival-“Viva la Vida.” 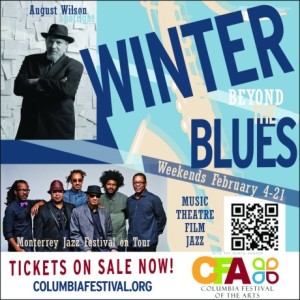 Here is schedule and ticket information. Tickets can be purchased online or by phone from Tickets.com, or by calling (800) 955-5566.

LINK:
The Columbia Festival of the Arts Presents ‘Winter Beyond the Blues’ From February 4-21, 2016 by Susan Brall.