Most of Shakespeare’s plays can be classified as comedies or tragedies, where everyone gets married or everybody dies, but Troilus and Cressida toes the line. It has its moments of levity, but it also has its moments of defeat. Featuring 22 actors in 33 roles, it’s a huge undertaking and thus is one of Shakespeare’s least-performed plays. The University of Maryland School of Theatre, Dance, and Performance Studies tackled this diamond-in-the-rough, giving it a contemporary twist by incorporating elements of modern sports and pop culture.

Directed by Matthew R. Wilson, the play is set in 13th century B.C.E. in the middle of the Trojan War, although this interpretation gives it a modern setting. Prince Paris (Andrew Saundry) has won Queen Helen (Jocelyn Brocato) away from the Greeks, and the Greeks have rallied an army to win her back. Pandarus (Yari Jamali) tries to set up his niece Cressida (Ashley Pugmire) with Troilus (Noah Israel), son of the leader of Troy.  But the war ravages on, and when beloved Trojan Antenor (played by both Trehana Riley and Samarra Coakley) is captured, Cressida is at stake.

The production’s costumes, designed by Alexa Duimstra, creatively blended classic and contemporary. The male characters, dubbed “soldier-jocks” by Wilson, wore costumes that mixed armor with football pads, complete with their names written on the back (which was quite helpful in keeping track of the characters). Antenor wore a mascot costume, many of the female characters dressed as cheerleaders, and Helen dressed as a homecoming queen.

Captivating sound design by Patrick Calhoun blended sounds of combat with the cheering of a football stadium. The use of contemporary music helped transition between and set the mood for different scenes. The set, designed by April Joy Vester, seated the audience on either side of the stage, which made us feel like we were at a sporting event (even more so when Antenor tried to pump up the quiet matinee crowd).

In Shakespeare, it’s easy for actors to get caught up in the grand poetry and struggle to convey meaning. As Troilus, Noah Israel conveyed the humanity of his character through nuanced gestures, like his careful and comical attempt to sneak out of bed with Cressida without her noticing. Likewise, Ashley Pugmire’s performance of Cressida accompanied the modern setting well and was engaging, subtle, and surprisingly human. Montana Monardes, as Aeneas, was another standout who also gave a strong, natural performance.

While the first act lagged at times and some actors’ dialogue was difficult to comprehend, the play picked up with a memorable “school dance” scene and dynamic fight scenes later on. And while the ending isn’t exactly satisfying, it’s a fitting conclusion to this true hybrid of a play. 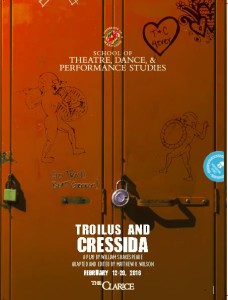 Troilus and Cressida plays through February 20, 2016 at The Clarice Smith Performing Arts Center’s Kogod Theatre at at the intersection of Stadium Drive and Route 193 (University Boulevard), in College Park, MD. For tickets, purchase them online.