The world of Roald Dahl is a fantastical place that stretches the boundaries of imagination. One of his best known works, next to Charlie and Chocolate Factory, is James and the Giant Peach. Adventure Theatre MTC has taken on a musical adaptation (with Lyrics and Music by Benj Pasek and Justin Paul, and Book by Timothy Allen McDonald) of Dahl’s famous tale of an enormous peach, talking bugs the size of people, and a voyage over sea and air.

Directed by Michael Baron, James and the Giant Peach is a wonderfully fun and imaginative production. Baron has created a truly touching version of this incredible tale of finding the real meaning of family.

Costume Designer Jeffrey Meek has created beautiful and intricate costumes for the over-sized bugs. And along with the incredibly creative use of umbrellas, puppets, and projections, by Props and Puppetry Designer Andrea Moore, Scenic Designer Katie Sullivan, and Lighting Designer Rob Siler, the magical adventure of James comes to life.

After losing his parents, James (Henry Niepoetter) is left in the care of his only living relatives, two greedy, heartless Aunts, Spiker (Karen Vincent) and Sponge (Valerie Adams Rigsbee in for Awa Sal Secka), who only agree to take James on for the money and free labor they think they can get out of him. The duo introduces themselves with the song, “Property of Spiker and Sponge,” and the Aunts immediately endear themselves as the amusingly despicable villains.

Niepoetter tenderly conveys James’ sadness and vulnerability over the death of his parents, and the sisters do a marvelous job at reveling in their own wickedness and belittling their nephew, which only makes James’ character all the more lovable.

Benj Pasek and Justin Paul’s score for this production, guided with musical direction by Aaron Michael Broderick, is gorgeous. And even the simple “On Your Way Home,” sung by James, carries with it the magnificent simplicity of the love of family.

The charming Keith Richards plays Ladahlord, who gives James the magic to change the course of his life and also serves as a guide throughout the story.  The ensemble sings the lively “Shake It Up” as James and Ladahlord gather all of the special ingredients they need for the spell. But when James trips and spills the magic potion onto the ground, at the base of an old peach tree, he fears that he has lost his chance for a better life.

Soon after, though, we learn that the magic was simply absorbed by the tree, which then produces an enormous peach. Discovering a door on the peach, James ventures inside where he meets Spider (Suzanne Lane), Green Grasshopper (Jimmy Mavrikes), Centipede (Joshua Simon), Ladybug (Emily Zickler), and Earthworm (Tobias Young). These common bugs have transformed into human sized, intelligent insects. 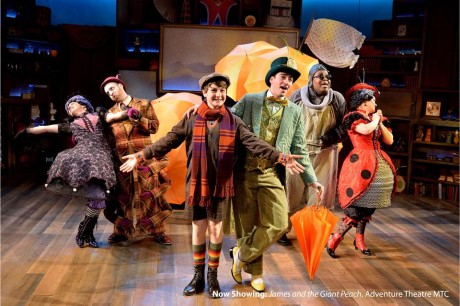 From there the journey has begun and the magic proves to have done its job in giving James a second chance at creating a happy life.

Lane as Spider, Zickler as Ladybug, and Mavrikes as Grasshopper are poignantly kind to James and exude on Niepoetter the doting attention that the hurting James needs. They sing the moving song, “Everywhere That You Are,” to remind James that his parents will always be with him and the harmonies are heartbreakingly beautiful.

Simon, as the adorably ill-tempered Centipede, and Young as the hilariously spastic Earthworm, complete the insect quintet and each bring their own dash of attitude and flavor to the show. Young finds his Earthworm groove with the showstopping “Plump and Juicy.” And Simon proves that no one is immune to the strong, uniting feel of family.

Adventure Theatre MTC’s James and the Giant Peach is a show the whole family should see. It’s moving and hilarious and extremely entertaining. Bug your parents to take you now before the run sells out!