Mount Vernon Community Children’s Theatre presents Tim Kelly’s Ghostchasers. Directed by Kaitlin Kemp, this play is full of surprises– the first and biggest being that despite popular belief, this play holds no relation to the popular film Ghost Busters, an assumption that the director herself admitted to when she chose it.

Written in 1940, its topsy-turvy plot, slapstick humor, and quick dialogue make this play a quintessential work of farce. Farcical theatre relies on misunderstandings (mistaken identities, misheard information, and improbable timing, to name a few) that pile atop each other at whirlwind speed, leaving a wacky chain of events in its wake. This type of theatre is not the easiest to pull off, making it an ambitious choice for the players of MVCCT. While there is definitely room for improvements in their production, the fact that a group of young actors pulled together to produce it at all is admirable in itself, and the ensemble shows a good amount of brewing talent.

Set Designer Suzanne Parrish did a lovely job turning the stage into the “Hangtown Asylum for Extremely Tense People.” With a full set of furniture, pleasant green walls covered in artwork, and a few built-in surprises (keep your eye on the fireplace!), the space was detailed and creative.

Lighting Designers Paul and Rachel Callahan, Board Operator Hannah Roddy, and Sound Operator Emily Roddy complete the atmosphere with plenty of eerie effects, including heavy thunder and rain and flickering lights during an electrical storm.

Costumer Pan Peckar really brought out the character’s personalities with their outfits; for example, the wacky and unpredictable Madam Mysteria wears bright patterns and a feathered headpiece, while the Ghostchasers’ wildly accessorized jumpsuits (safari hats, aviator goggles, and a hair dryer tucked into a belt, to name a few), suggest their lack of professionalism and credibility.

When Holly Hollycock’s (Cameron Long) plane is forced to land in Hangtown due to a storm, she decides to pay a visit to her nearby cousin Dr. Roy (Andrew Herrup, who really hams it up with his role) at an asylum that he operates. However, what Holly doesn’t know is that her eccentric cousin practices a special kind of therapy that allows his patients to play out their personal fantasies, filling the place with extreme characters; including a sergeant in the middle of battle, a bride panicking over her wedding, and a lumbering “zombie” (Emma Fugate).

To cap it all, a recent earthquake seems to have shaken loose a poltergeist who keeps them all on tenterhooks. A overwhelmed Harriet calls in reinforcements– the Ghostchasers, a rag-tag team of oddballs led by the ridiculous Honcho (Jacques Worth). The Ghostchasers are here to the rescue…if they don’t  end up making the problem even worse, that is.

As with all farces, the plot is jam-packed and fast-paced, and characters usually end up not being who you think they are. All the interweaving sub-plots and characters can get confusing and jumbled, so this show needs your focused attention. That being said, I’m impressed that such young actors took it upon themselves to tackle this project. Many of the actors juggled more than one role as well, which is impressive.

This ensemble is only beginning to hone their acting craft, so perfectly polished performances should not be expected. However, some standout performances included Emma Pikul, who showed great comedic timing as an Orderly (or is she?), Lily Webb as the put-upon Detective Pepperday, and Isabella Danyluk as Sergeant Ruff/ Cleaning Woman. Danyluk’s “Cleaning Woman” proved to be a small part made memorable with her exaggerated accent and cackle, proving that the part is what you put into it. Caitlyn Magro also got a lot of laughs with her melodramatic performance as Madame Mysteria.

I always encourage families to take their children to see their peers perform; seeing kids their own age onstage is inspiring. Mount Vernon Community Children’s Theatre’s production of Ghostchasers is a good bet for a night of family fun. 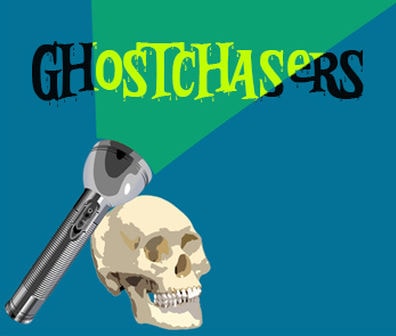 Note: One thing I immediately wished for was some adverts– performed at the Heritage Presbyterian Church, I saw no signs about the production near or around the building. Also, the church has multiple entrances, and with there being no signs about the play, I walked right into the middle of a solemn church service before finding the right door.

I also wished that the audience was asked to turn off their cell phones and other appliances. Of course this seems implied, but every time cell phones are not addressed before the show, someone’s goes off right in the middle of an important scene, as was the case with my performance.