Laurel Mill Playhouse proves the dream is possible in their powerful production of Man of La Mancha. This 1964 musical with its book by Dale Wasserman and music and lyrics by Mitch Leigh and Joe Darion stands the test of time. It tells the story of a “mad” knight, Don Quixote, as a play-within-a-play, performed by Miguel de Cervantes and his fellow prisoners as he awaits a hearing with the Spanish Inquisition. This iconic musical boasts such musical favorites as “The Impossible Dream” and “Dulcinea.”

The original Broadway production won five Tony Awards, including Best Musical. The musical has been revived four times on Broadway, becoming one of the most enduring works of musical theatre.

Set Designer Brian Douglas does a phenomenal job creating the dark and dank holding cell of the Spanish Inquisition with amazing artistry. The stone walls highlighted with levels of deftly lit prison bars and fire pit create the texture of the set. It is clear that Douglas worked in tandem with Lighting Designer Michael Hartsfield and Director Daniel Douek to give his set the perfect amount of light and shadow. This completely adds to the realism of the set design. Bravo to all of these men for an outstanding job.

Kudos go out to Costumers Sasha Nelson, Cynthia Anderson, Lisa Oberg, and Kat McKerrow for their authentic looking costumes of 16th century Spain. The darkness and despair of the time was evident in every prisoner’s piece of clothing, as well as the contrast of the aristocracy. Don Quixote /Alonzo Quijana’s niece Antonia and her fiancé Dr. Sanson Carrasco are wonderful examples of this contrast.

Ruta Douglas Smith did a wonderful job staging the fight choreography for some very intricate moments in the show.

Musical Director Mimi McGinniss did an exemplary job with every aspect of Man of La Mancha’s beautiful score. It was clear that the actor’s spent countless hours perfecting the complex melodies and harmonies to get just the right blend of voices for each piece in the show. The blend of voices in “The Impossible Dream” reprise brought tears to my eyes in the finale of the show.

The Pit Orchestra, led by Ms. McGinniss, did a good job keeping up with the actors on stage, especially since they were housed behind the set.

A powerful force in this production was clearly Director Daniel Douek. His footprint was evident in every aspect of this production from his casting to his staging. He moved his large cast around the small Laurel Mill stage with ease and grace, creating some lovely visual nuances. He used every aspect of the theatre and the stage making some truly powerful moments. The scene where Don Quixote/Alonzo Quijana was on his death bed was particularly moving and well-staged.

Fred Nelson as Miguel de Cervantes/Alonzo Quijana/Don Quixote gives a moving and commanding performance as the dreamer tilting at windmills. His expressions were captivating and his narrative of the show compelling. He was definitely a force to be reckoned with as he moved from one character to the next. His rendition of ‘The Impossible Dream’ was stirring.

Quixote’s manservant Sancho is charmingly played by Alan Barnett. He is the perfect sidekick to Nelson’s larger presence on the stage, and is particularly delightful in his rendition of “I Like Him” as he tries to explain to Aldonza why he follows Quixote’s misadventures.

Mary Wakefield delivers an exceedingly strong performance as Aldonza/Quixote’s Dulcinea. Her portrayal of a scullery wench, who is transformed by Quixote’s high ideals and courtly behavior, is captivating in every sense of the word. Her singing voice is powerful and perfect for the vocal range of her character. She gave a particularly moving version of “What Does He Want of Me?”

Tracy Davidson, John Brown, Christine Thomas, and Joe Mariano are marvelous as the quartet of Quijana’s niece Antonia, her fiancé Dr. Carrasco, the Housekeeper and Padre in the musical number “I’m Only Thinking of Him.” The harmonies were spot on with a marvelous blend of voices.  The transformation of Joe Mariano’s Crazy Prisoner to his Padre character was something short of amazing.

Richard Greenslit also contributes a solid performance as the Governor and the Innkeeper. His transitions were seamless and charismatic.

This production also boasts of a great group of ensemble actors who all played several roles throughout the show. They are Ronald Araujo, Penni Barnett, Kristina Brooks, Cathy Holmes Clark, Gary Eurice, Kel McClanahan, Trent Murphy, and Rocky Nunzio. Their commitment and dedication to the production was obvious in each of their performances.

Make it your quest to see this engaging production of Man of La Mancha at Laurel Mill Playhouse before it’s impossible to snag some tickets. 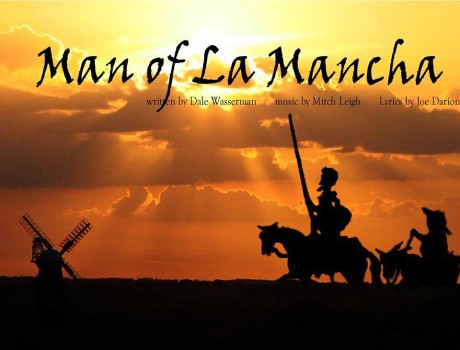