Creative Cauldron presents The Dancing Princesses, a Learning Theater  production adapted by Ellen Selby and Laura Connors Hull, with music by Matt Conner and lyrics by Matt Conner and Stephen Gregory Smith. There are many variations of this tale, spanning across different eras and cultures worldwide. Directed by Laura Connors Hull and Ellen Selby, the Learning Theater’s version mixes the classic Greek tale of Persephone with modern values and customs (and humor!), and the result is a fantastic night of live theater. 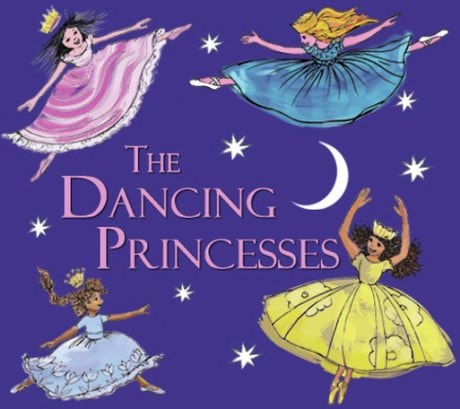 One recurring theme I love seeing the Creative Cauldron is that the sets usually transcend the stage. For this production, Scenic and Costume Designer Margie Jervis and Stage Carpenter/artist Bill Abel place “marble” columns, golden sconces, and luxurious velvet drapes throughout the entire space, creating a royal atmosphere fit for (twelve!) princesses.

Because the cast is so large and their venue is an intimate setting, the space needs a lot of consideration so that it utilizes its fullest potential. Though simple, the layout is refined and very cleverly thought-out. As for costumes, Chris Riherd and a team of volunteers do a fine job dressing the young cast– with twelve princesses onstage at once, it s a whirlwind of colorful taffeta!

Jim Lynch gives a great performance as a widowed king overrun with a veritable soccer-team of daughters. The king is frustrated because every morning, his daughter’s new slippers are worn through, as if they had danced the night away! Before turning his fortune over to the royal cobbler (who has been kept very busy!), he is determined to discover where the princesses go every night, and enlists the help of young noble men far and wide. Much to the dismay of his daughters, the king promises the man who brings answers a marriage with the princess of his choice. However, it seems that his daughters are more clever than he realizes; when they’re not manipulating their father with distractions, topic-changes, and “group hugs,” they’re ensuring that these unseemly princes vanish and never return. As more and more princes (and shoes!) disappear, the king grows melodramatic, much to the young audience’s delight. Where do the princesses go every night, and what magical secrets are they keeping?

The plot unfolds between two worlds, and the distinction between them comes mainly from Lighting Designer John Sami, who uses blue hues  and a slow-revolving disco ball to help create the Underworld. Accompanied by rhythmic, twinkling music, the hypnotic tone lures in the audience right alongside the princesses. Dancing as if in a peaceful trance, they are beckoned by a Mystical Figure. Ellen Selby is haunting and beautiful in this role– while she never says a word, she is easily the most expressive character on the stage. Her movements and body language exude longing, love, and a protective shield. The plot is an entertaining one when taken at face value, but there is also a lot of emotional leeway built into it, particularly concerning love and loss. These poignant topics set the stage for some great conversations to be had afterwards.

While the overall tone of this production is somewhat solemn (the music, though beautiful, is slow and heady), there is also a ton of humor. James Durham, Owen Thiebert, and Nicholas Riehm get a ton of laughs as the Silly Servants, and Nora Hill is very funny as Prince Egbert, an energetic and easily distracted annoyance. This production is not afraid to throw in some political humor for the adults as well, referencing topics such as Obamacare and displaying striking similarities between the bombastic Prince Donald (Maya Wrona, who shows real talent) and a current presidential candidate.

As the majority of the cast is very young and still building their technique, perfect performances should not be expected. However, there is a lot of great potential here, and with solid direction and support, the performances  were overall very impressive. It was also obvious that the young cast was having the time of their lives, and the energy was infectious.

After the show there was a brief Q&A between the cast and audience, and the kids practically jumped over each other with excitement to get the chance to answer the audience’s questions. The Learning Theater seems like an incredibly enriching and joyful experience for a young thespian…where was this when I was a kid?

I really enjoyed Creative Cauldron’s production of The Dancing Princesses and I highly recommend it for an evening of family fun!