I saw the whole of Baltimore

From May until December

Of all the things that happened there

That’s all that I remember.

It’s interesting how one negative incident can shape our perception of a new place. Kirsten Greenidge’s Baltimore is a close look at how one racial incident can shape a college environment. Under the direction of Leslie Felbain, the University of Maryland School of Theatre, Dance, and Performance Studies gave a fine performance of a complicated new play, the second play in the Big Ten Theatre Consortium’s New Play Initiative for women playwrights.

Set in a nondescript university in a 12-hour time-period, Baltimore tells the story of Shelby (Summer Brown), an over-committed resident adviser who is overwhelmed by her students’ needs. When one student, Fiona (Mikala Nuccio) draws a racially-charged cartoon of another student, Alyssa (Agyeiwaa Asante), chaos ensues among the students on the floor, and Shelby’s post-racial mindset is challenged.

The disconnect between the ways millennials and the older generation look at race is a major theme in this play, as represented by Shelby’s interview for the school paper with Dean Hernandez (Philip Kershaw), the university’s first black dean and a strong civil rights advocate. There’s also the question of how to include other races in civil rights activism. “Why is race in America reduced to black and white?” wonders Rachel (Rebecca Mount), a Latina student.

While the play raises important questions, to me it seems out of touch with undergraduate college students. The dependence of the students on their RA seemed far-fetched; I feel that in this day and age, it would be more realistic for the students to be texting, not calling their RA. Dated cultural references to Jackie Kennedy and “Car Wash” almost went over my head, and the complexity of the relationship between Shelby and her Filipina friend Grace (Kristen El Yaouti) felt dramatically overblown and unrealistic to me. As a journalism major, I find it hard to believe that a writer for her school paper would arrive at an important interview without at least a couple interview questions memorized (and then openly confess to her dean that she was ill-prepared because she had been out drinking, like most “typical” college students).

That’s not to say the students didn’t excel with what they were given. Summer Brown is believable as a black student who hasn’t fully come to terms with the struggles of her preceding generations. Mikala Nuccio avoids falling into the caricature of a villain as Fiona and feels like a fully developed, nuanced character.

As Bryant, Fiona’s boyfriend, Avery Collins is another nuanced performer, capturing his conflict between standing up for what is right and his attraction to Fiona. All of the actors delivered fine performances, even though some of the characters’ traits seemed stereotypical of extremes or a generation that was more segregated.

The set, designed by Diana Chun, creatively depicts dorm rooms and Dean Hernandez’s office with lofted, screened-in cubicles, onto which were projected images designed by Mark Costello. These projections, doodles, and cartoons, portrayed the images Fiona doodled in her notebook.

Baltimore is timely, bold and relevant, but the dialogue and character development could use some finessing to make it more believable and resonant with young audiences. 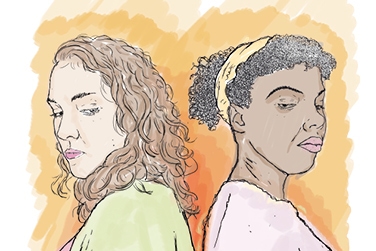 Baltimore plays through March 5, 2016 at The Clarice Smith Performing Arts Center’s Kay Theatre at at the intersection of Stadium Drive and Route 193 (University Boulevard), in College Park, MD. For tickets, call (301) 405.ARTS (2787), or purchase them online.